Photographer Laura Kaczmarek has been involved with Girls Are Awesome for some time now and implements joint projects, mostly together with her Heckmecks crew. The girls are at home in the pott area and got a nice summer day visit from Torsten Frank, who brought a crew with him to spend a sweekend in Essen. We talked to Laura about the clip and her crew.

Hey, Laura, can you tell us something about the clip?

That was just the phase when I did the book with Adidas. Then Torsten (Frank) said: "Don't you want me to go to the Pott with some people? So they rented an Airbnb here in Essen and spent a weekend there.

In the clip you can see the Heckmecks crew, can you introduce them a bit more detailed?

Three or four years ago we girls were skating again and again. Somehow everybody wanted a crew or a gang. We say super often: "Mach mal kein Heckmeck" [which means: “Don’t stress around”, editors note]. That was a good fit, because we used this sentence a lot of times.

You said you used to hang out with the boys and now you have your own crew. How has that changed for you since more girls are finally active in skateboarding?

As I said I didn't know that before. That really came from one day to the next. It's also a completely different feeling to always hang out with the girls, although of course I also like to hang out with the boys. With the girls one is of course more on the same level but pushes oneself nevertheless well. The connection between the crews is huge. There is a girls crew in every country. You know each other through social media, support each other, meet and skate with each other.

I saw you were in Tel Aviv and met a girls crew there.

Exactly, I also never expected that we would meet a girls crew in Israel. I didn't think skateboarding was that big there. That was really cool.

You get the feeling that since the crew found each other you are skating more often. Or is that just a distorted external perception?

I think that's the external perception. So I can't skate as much as I used to. I'm 29 years old now and that's why it doesn't work that way anymore. You never have time, but I try to go skating as often as I can. In winter I might make it once a month and in summer once a week. I also had a phase in which I focused on photography. For example, if I know that I have a good job next week, I can't skate because I'm always afraid that I'll fall on my hand or that something will happen. 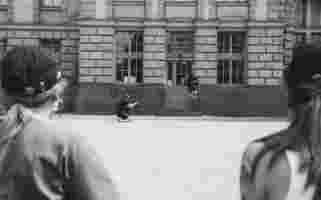 You've been through Girls Are Awesome a lot on skatetrips, haven't you?

Yes, we were just in Tel Aviv, in Switzerland, in Austria and a lot in Berlin.

Can you briefly explain again what Girls Are Awesome is?

I would say this is a community that focuses on not so well known artists and tries to support girls.

What's on the agenda for Heckmecks and Girls Are Awesome 2019?

I will have a meeting with the Girls Are Awesome people soon and then we will discuss what else will be done. We Heckmecks are now also not in such a way that we constantly show ourselves as Heckmecks, but are simply together. We do what we like to do best: skate, travel and have a good time together.

Mark Gonzales with a boneless over Tony Hawk on a self-built board. It doesn't get any better than this.