As I was growing up I digested the unwritten rules of the early 2000’s skate culture without any questions. I got good at navigating my way through “being real” and made it all the way to the pro ranks. I kept my cool if I landed a hard trick and never said I wanted to become something. “Skateboarding is not a competition. It’s a way of life and if you’re not a real skater I don’t care what you think”. And snowboarding? Baggy colorful clothing, cheesy hip hop image... Pffff… It’s not a bluntslide if you don’t have wheels. This was the sort of vibe I grew into and even though my own beliefs and the whole skate culture has changed a lot in the past 20 years I still found myself struggling with the questions: Should skating and snowboarding be mixed in a video part? Is there a way to do it with good taste?

It’s not a very commonly seen mix in the video field even though these two cultures cross each other in many ways and have gotten closer back to each other from that 2000’s era. At least in Finland. Surfing’s been popping up and gotten accepted as a side fun in the core video culture so could the time be ready for adding snowboarding to the mix too? Just like in the old days. 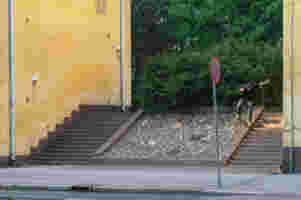 In my critical mind mixing these two in a video is not like making a pizza, which even in its worst is still edible. I think it’s more like walking on a minefield where a single wrong move can have a fatal outcome. I’ve done close to 30 skate parts in my life and I think the minefield was the exact place where I wanted to venture. Something new. Something out of the ordinary comfort zone and into the uncomfortable and experimental side. The only place where I felt I could progress and move forward.

Filming snowboarding in the streets gave me a platform where I could have one foot in the comfort zone and step the other into completely new territory. Skaters mostly watch down where snowboarders scout the rooftops. A rail is a rail but triple the proportion on snow. Both share the same sort of aesthetics, principles and unwritten rules. Small details make the difference and show how well you know your trade. Only difference is the time of the year.

My appreciation and respect for snowboarding grew tremendously during last winter. Not only for the stuff that they do but also how much effort they need to see to make a spot rideable. Shoveling. Lot’s of it. Not to mention it’s cold and wet. We skaters mostly just need to wax up something before the camera gets out. If someone still says it’s easier than skating because the board is strapped to your feet… I advise you to look at the bigger picture.

While making the “Short and bit snowy” video (which will be released on Solo YouTube) I asked myself if I wanted to see some of my favorite skaters do a skate video with a snowboard section in it? Hell yes, as long as it’s made with the right portions and good taste. I’ve seen a glimpse of snowboarding from McCrank and the old Cardiel snow footy is golden. I don’t consider myself anywhere near their league, but if they would hype me out of my comfort zone then maybe I could inspire someone else to go explore too.

The true Kings of the Road are keeping on traveling.

The usual Antiz lust for travel paired with new faces and few seen tour stops. A slightly different clip of the company from Lyon.

“Inside Out” is not only the title of the new Carhartt WIP full length but also the concept. We talked to the filmers.