Advertisement
06 May 06, 2017
Text by Nick Jensen
Photos by Gunter Lepkowski
Posted in

Oliver Laric is an Austrian-born artist, who currently resides in Berlin. His work is questioning copyrights or, rather, thinking about the additional value that arises through copying and cultural transfer. Although he’s not skating anymore, he’s still observing the skate scene and already knew about Isle when Nick Jensen –an artist himself – was asking for a collaboration on a board series. Their appointment gave us the opportunity to participate at a chat between Oliver and Nick that might be a bit off the tracks from what you normally read in a skate magazine. But if we got it right, creating something new by bringing ideas from one world to another is exactly what Oliver is all about.

Have you ever seen it on YouTube when people perform over their favorite hits? I always thought – why do they do that? I would be embarrassed, but perhaps if I considered myself to be a cool and talented rapper/singer, then I would think otherwise. This came to me when I saw Oliver Laric’s first solo exhibition in London back in 2008. He compiled multiple YouTube clips of amateur acolytes rapping over 50 Cent’s In Da Club, Candy Shop and How We Do. It made me laugh and drew me in – I was fascinated. Oliver brings new relationships to things that I would have otherwise missed. I admire his work and I am delighted to be working with him on our next series for Isle.

Hi Oliver, I remember when I contacted you, you already knew about Isle – and you have quite an extensive knowledge about skateboarding in general. Did you use to skate? And what interests you about it?

I was skating from when I was 11 until I was 16 or 17 and it was central to my life. It all ended with a complicated fracture of my right arm. At some point, I did have naive ambitions to become pro, which never became a reality, so doing board graphics now is a delayed dream come true.

Who are your favorite skaters?

While I was still skating, I was following Jamie Thomas, Brian Anderson, Kareem Campbell, Tom Penny, and Ricky Oyola, among others. As of late, I enjoy watching Bryan Herman, Neen Williams, Lem Villemin, Tom Knox, and Diego Najera, among others.

Most of the artworks you chose for the Isle boards are from your Transformation and Kopienkritik series. Why did you choose these?

The motifs depict transitional moments, somewhere between A and B, that are inherently adaptable, so they can simultaneously exist as skateboard graphics, sculptures, and videos. 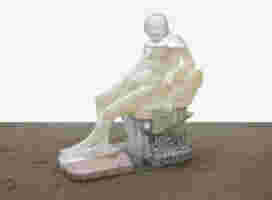 Were there any problems or new opportunities in translating your existing artworks?

The vertical format is not easy at all and I do have a different appreciation for regular board designers from this experience.

A lot of your work involves animation. Characters morph from one state into another. Has it been a challenge to use elements from your animations as static images for the boards? Does skateboarding bring a different kind of momentum to your ideas?

A still from a video omits information, but it also has potential to produce speculative information. I like the idea that a single moment in time can imply an imagined before and after.

Does the worth of an artwork, the monetary as well as the artistic, differ whether it’s printed on a skateboard or it is a photo print/sculpture in a gallery? And do you enjoy the thought that people will be sliding and marking your artworks now?

I’m very excited to see how the graphics will change through that kind of usage. My favorite public monuments tend to be those that don’t exist in a vacuum but keep getting modified by nature or graffiti. To me, there is no predefined hierarchy of values between the different iterations of the work from skateboard to museum.

Walter Benjamin argued in his famous essay The Work of Art in the Age of Mechanical Reproduction that reproducing an artwork through printing or photography was to take away from its aura. Do you think about artworks in terms of aura?

I completely disagree with that thought. If anything, reproduction seems to amplify aura. Every T-shirt, lighter, and napkin depicting the Mona Lisa acts as an invitation to make that pilgrimage to the Louvre.

I feel like skaters relate aura to style. A certain thing that can’t be reproduced. There is only one Gino, for example. Do you agree?

People certainly seem to attempt the reproduction of style. I felt like that was the case when Tom Penny appeared. I noticed an influx of skaters trying very hard to look relaxed. Every skater emulating Tom Penny seems to amplify his aura. It’s hard to articulate style and even harder to quantify, which might be the issue with formats such as SLS.

The increase in new technology and the accessibility of information has changed skateboarding dramatically. Do you think this changes the quality of our experiences?

I wonder if there are any studies on the effects of Tony Hawk’s Pro Skater on technical progression in skating and if there has been an observable increase of multi-trick-ledge-combos in skate videos following the release of the game. There are obvious benefits to accessibility, but I guess there is an element of pressure to participate and a continuous need to document and spread material that demands affirmation. 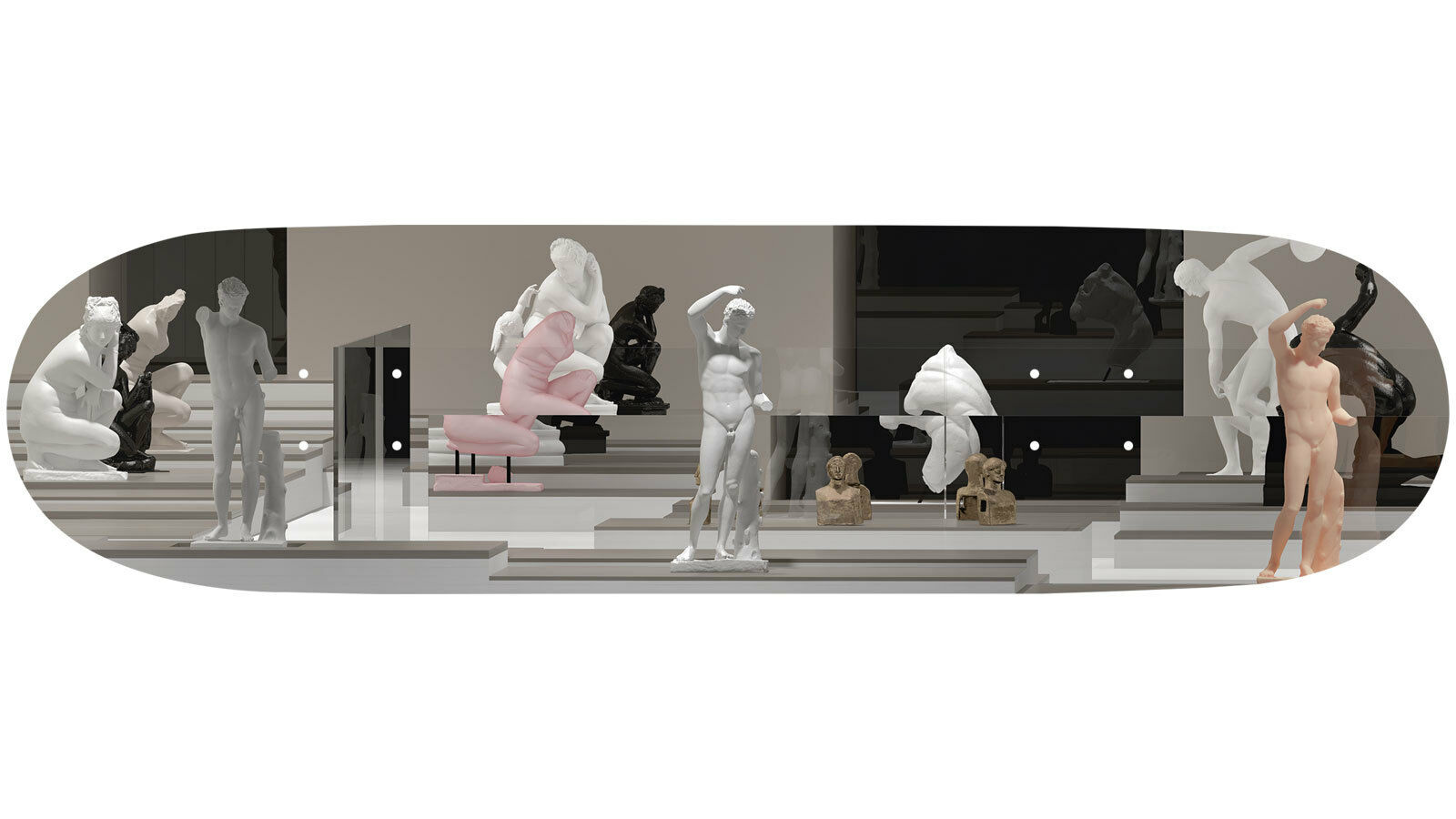 You are a co-founder of vvork.com and put your work on the web to download for free – giving access to anyone and anywhere. Is this a decision to challenge the commercial interests and the elitism so commonly associated with art?

It’s important to me that the accessibility of work is not restricted financially. There is also comfort in having your own space without geographic restrictions. Much of the enjoyment of making work available for free is seeing how it is being used. One of the graphics I used for the decks is a rendering of a 3D scan of a statue of Hermanubis from the 2nd century AD. The statue is a hybrid of Greek and Egyptian mythology, combining a human body with a jackal head. It’s downloadable from my website threedscans.com and can be used without any copyright restrictions.

I remember being around when new tricks were being discovered/invented. Today, what is really interesting is how skaters recontextualize the past. Pontus Alv used music from an old H-Street video in I Like it Here Inside My Mind, Don’t Wake Me This Time. This is his way of being contemporary. Do you think our culture is becoming more reflective?

I feel like I’ve also noticed this. When I was skating, varial flips were forbidden but seem to be part of the acceptable repertoire at this point, as the trick is a reference, not a trick per se. I feel this referentialism and positioning is common across disciplines, specifically in music.

"My favorite recent video parts are raw or rough cuts and B-material, such as Tom Knox’s Vase part. They seem to benefit from the inclusion of failed attempts and exclusion of music."

In a video of yours, it’s said that you looked at a cathedral for hours but only saw the cathedral accurately on the photos in a book you bought afterwards. What importance do you think photography or videography has in skateboarding?

That line is stolen from Susan Sontag. I do have a sense of familiarity with many skate spots, even if I’ve never been there. And I might visit EMB if I ever go to San Francisco just to maintain that idea of collective perception.

Skateboarders want authenticity. Photos are not allowed to be photoshopped – at least not in a way that the trick changes – you’re not allowed to upspeed a video and stuff like that. But do you think that some kind of “cheating” could be interesting? Or, the other way around, that the demand for realness is restricting the creativity?

My favorite recent video parts are raw or rough cuts and B-material, such as Tom Knox’s Vase part. They seem to benefit from the inclusion of failed attempts and exclusion of music. These parts might be the equivalent of the B-side in music, which has often been the more interesting space for experimentation. On the other hand, I do appreciate what Yeah Right! did. I don’t think it’s necessarily a choice between one or the other.

Have you ever been to the Slap forum and seen all the Photoshop madness that’s going on there?

No I haven’t… should I get into it?

The boys have once again drifted away from the Atlantic and are now infiltrating the KGB with American support.

17 years after its release Blueprint's Waiting For The World is still worth watching.