Nestor Judkins has been spending half of his life in front of the lens of the skateboard world, smoothly operating his skateboard throughout countless video publications – from the Tiltmode Army to Enjoi to several audiovisual offerings from the brand with the three stripes. It’s known to many that he’s one of the nicest and most-traveled guys around. But chatting with him in the streets of London, the Leica around his neck, and hearing his passionate stories sparked my interest to dig deeper into his photography. It was obvious that there must be something else about it. And, luckily, he was eager to share it with all of us.

You told me you’re on the Azores right now, how did you end up there?

It’s random. Some friends of mine from Canada were planning a trip here. A big community from Azores moved to Canada and one of these skater’s parents are from here and still have a house, so we planned a trip out here and came out. It’s an easy destination from the east coast. We’re looking for spots and we’re finding some but not too many that good, actually.

Isn’t it a couple of islands?

Yeah, and we’re staying on this one island all the time. The main island, the biggest one. It consists of nine islands, but it’s not too easy to go from island to island, it’s actually pretty expensive. So we’re staying on this one, checking out all towns, going to a hot spring today, and all sorts of stuff. We found a skatepark and whatever – it’s kind of skating in the winter for a little bit, but it’s good!

It seems traveling doesn’t get old for you?

No, not really. I still like it. In fact, different versions of it are fun. Like, this is more fun because we’re not only skating but doing whatever else. It’s good!

So when did you get into photography, was that inspired by anyone? Or how did you start shooting?

I got into it when I was a teenager. Me and my friends I used to skate with, we had a photography class at the high school I went to. And that was cool because our photography teacher used to skate. He showed us all of his own skate photos, he shot in the ‘80s in San Jose, so he had photos of Ray Barbee and stuff like that, Steve Caballero. He was in the skate scene, so he showed us those photos, and me and my friends, we would just shoot photos of skating and use the darkroom. So I got into it in that way because I found it really fun, like, shooting photos and developing using in the darkroom, and then I think I just stuck with it. And as I grew up and started traveling with skating, it goes hand in hand. This is pre iPhone and all that, I always wanted to have good pictures of the places I went to, so this became something I couldn’t imagine living without. Not in an artistic way, but just documenting things. And I always shot film in that way since I started with film and understood film.

And that never changed, so you’re still going to the darkroom and all that?

Yeah, that never changed, cause I got into it that way and digital just wasn’t that great or accessible 15 years ago. And I always liked the anticipation of film and going on skate trips and shooting photos and seeing them when you’re at home. It feels like part of the whole thing for me. 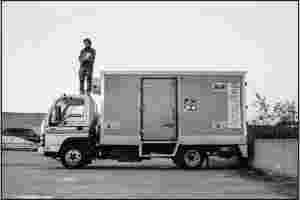 Do you have the same camera for 15 years or do you switch it up?

I switch it up. I had a Canon AE-1 for a long time, probably for 10 years, and then it finally broke. I wasn’t as serious about it until, like, the last 5 years when I began taking it more seriously. I always shot photos on trips with my Canon and I didn’t get that many photos and I came home and would sometimes be bummed. And I finally realized I should get another camera. A friend of mine had a Voigtländer and that’s a really good camera. It’s expensive but not too expensive, called the Voigtländer Bessa. I got that and that stepped it up for me. That was quite an investment in something expensive, but I would finally get good photos now that I liked. And from there it kept growing.

But it’s not like your travel routine changed around that time, did it?

No, nothing changed as I was traveling and taking pictures, I was doing that anyways. But I could afford a good camera, too, and that got me even more into it. It just evolved, and also I got older, I guess.

Is photography part of your everyday life or is it only a part as soon as you get on a trip?

In the last five to six years, it has become a big part of my everyday life since I started taking it more seriously. I take the camera with me every day, no matter if I’m skating or not skating. I walk around specifically to shoot photos. It’s a big motivation for me on a daily basis. It’s definitely what I’m more into than anything else. And it keeps growing.

"I like to capture people doing daily life things on the street – whatever that may be."

Is there a certain direction you’re taking? I realized there’s barely photos without people in the selection you sent me.

It’s always people, yeah. I’m really interested in shooting photos with people in it in some way. I used to shoot more cityscapes and stuff, but I’m more into exploring how people live and stuff like that. That’s interesting to me to capture that. Ethically, I kind of dabble that, like, sneaking photos of people and pissing them off, but I like to capture people doing daily life things on the street – whatever that may be. That’s what I look for, usually.

I think that works really well as you’re exploring so many different places and cultures.

I feel like I do shoot the same things whatever I do. I seek out the same kind of people. I like observing people and how they live, I guess, in a way. And for me, photography is some sort of solitary thing, walking around by myself and shooting photos.

Is it a personal thing for you or do you show your photos a lot and try to be in exhibitions and have bigger plans with all that?

No, it’s just been personal this whole time. I never did anything with it. I’m more into being active and taking the picture. A lot of times I don’t really do much with it. It’s just been the last year or two that I’ve been going through them, scanning the negatives, and compiling things – looking at it again in a different way. It’s been fun to look at pictures from 10 years ago from a trip. I never really had any plans with it.

Do you have a general interest in photography and do you follow other photographers?

I’m following different photographers, I go to exhibits and get really excited when I find out about a new photographer I didn‘t know about and I like their work. It’s like reading a good book, you exactly see yourself in this. This person shoots what I wish I could shoot. The first one that got me really into street photography was Robert Frank. I remember seeing his book The Americans and I got super stoked on that. He was traveling around and shooting people in different cities just doing daily things. I found out about Fred Herzog and then wanted to shoot color more because of his photos. It’s exciting for me, but I don’t research it a lot, I kind of stumble upon stuff in galleries and get inspired. But I never studied anything too much.

Did any of the skate photographers you go on trips with change anything for you?

Yes, for sure. With adidas, we shot photos with Sem Rubio for the past 10 years. I’m always amazed by his photography and how he is able to find different angles or use of light than anyone else. I always talk to people a little bit about photography or get tips from them, like, you should check out this camera or recommend photographers or different types of film. I definitely like picking people’s brain a little bit. And it’s really good for me since I really don’t know much technically about it. I never learnt beyond the basics how to do it. So it’s a good access to get a lot more information, how to technically take pictures better. 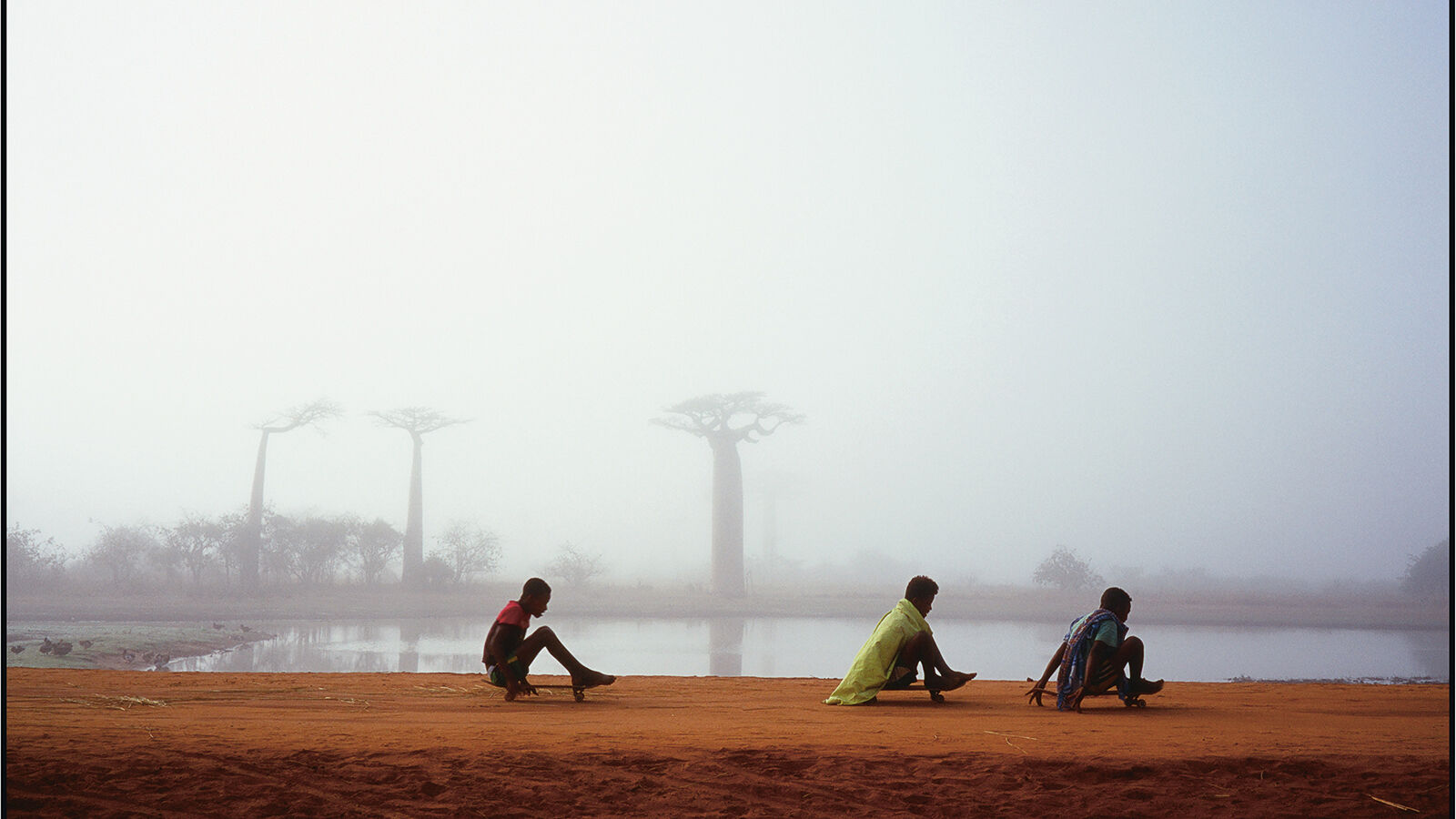 But it’s probably good to use your intuition a lot anyways, isn’t it?

Yeah, it’s good not to overthink it, cause then you might miss the shot, miss the moment. The best advice I got from people was just to have the camera on you at all times, more than anything.

Which can be tricky carrying it being a skater, right?

Yes, it is. I’m shooting more photos wandering around by myself.

What’s your favorite photo from the ones you sent me?

I like this one from Madagascar with the kids just pushing on a board. I’m really happy with that one. That’s a really cool location where we were and these kids from the village were really excited on the boards. I think it was sunrise, so the lighting is really special. That’s probably what I’m the happiest with.

"It’s like reading a good book, you exactly see yourself in this. This person shoots what I wish I could shoot."

So trips like that are what you’re going for the most?

So traveling changed a lot for you?

Yeah, these trips and that stuff definitely open your mind. You learn a lot about yourself when you are taken out of your element, when you’re forced to feel uncomfortable. It’s a good learning experience. Or traveling on your own or in smaller groups figuring it all out yourself has proved very helpful for me.

What’s the next trip?

There’s a lot of places on my list, but I don’t know if I’m going to make it there. I want go back to Russia this summer, to a small village in the middle of nowhere. Georgia is on the list, places like that I want go to. Somewhere new.