When it comes to symbiotic relationships and legacies between brands and photographers, DC Shoes and Mike Blabac are one of the first to come to mind. Now, however, there is a new Mike on the block and he is not shy to step into the puffy, DC branded shoes left for him to fill. Prior to being introduced to the roster as a photographer / field producer, Mike shot with John Shanahan and his career began growing alongside his friend's, as often seen in skateboarding. When John was introduced as an AM for DC in 2016, Mike got to come out skate and meet the team, and a couple years later in 2018 was offered a steady gig after shooting a small east coast trip. “I have gotten to do some of the coolest shit and get to see places I never thought in my life I would get to see because of these skate shoes and I would like to keep it rocking for as long as I can.”, Mike says. We've had the man himself give us some insight on some of his favorite moments of being on the road with the DC squad!

"We did a tour thru a few countries in Europe in 2019 and it started in Bordeaux on Go Skate Day, it started raining right when it was about to pop off so it forced us all inside Riot skate shop where the guys skated the box. It was a real old school 411 type moment to me, just a bunch of guys filming on a box in a skateshop full of kids hyping it up, it felt special." 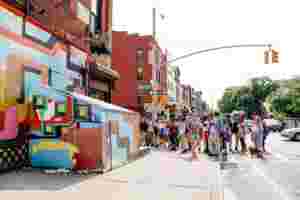 "During the filming of DC’s street sweeper two different crew’s of the guys came for a week each to film, John [Gardner] was there most of the time. We were driving to a spot and we just saw the setup. John inadvertently loves to skate things that only he can fit on to. Honestly, if he ate a bigger sandwich that morning that thing woulda caved in or the roll gate would’ve broken. Every kid in the area also got out of school in time to see it go down." 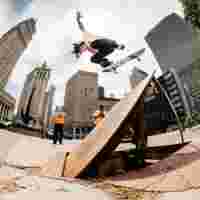 "This one was also during that same trip. I think it was Jaakko’s first time in NYC, This spot is a subway service stairwell that you can open sometimes. Two train guys walked up and tried to shut us down but Jaakko boosted it in their face instead." 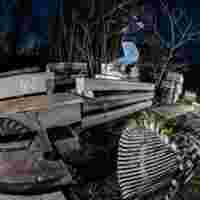 "Penny has secretly known where they brought all the salvageable granite from Love park since its demise. I had to climb a fence blindfolded to go in there with him to shoot this. It took a lot of homemade levers and ancient egyptian technology to move all those insane blocks by ourselves to make this skateable. Worth it. You can know find two of these ledges at Rizzo Rink, legal to skate in Philadelphia."

"I shot this photo about 12 hours after meeting Josh the night before on the 1st day of my 1st DC trip. I was hyped on it just because the back light and his steez. Turns out DC was hyped because the Josh’s new shoe had that phat logo on the bottom. They ended up using this photo on every shoebox of the Kalis S to this day!" 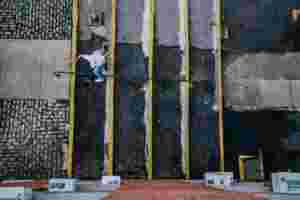 "You might have seen this one before! It was the cover of SOLO Issue #30 that had John's interview in it. I really was grateful for you guys giving us the front because I never in my head imagined this photo turned sideways, I shot it from the roof of a project building that a random girl with a little dog let me into. When I saw it turned sideways you made me see my own work differently and it felt refreshing."

"You’ve all seen him do it, it’s his thing. He can literally do it for a mile. He could ride so far in a hand stand he would disappear over the horizon. The attempt before this I was looking thru my viewfinder and didn’t see him coming but he curved straight into me and dropped kick me in the head at top speed. Almost had a full blown Latvian concussion."

"Gardner claims this was the hardest trick he’s ever done, I don’t doubt him. 9 months before this we had a full NJ crew out there cleaning the pool so he could try it, it looked insane, all fall leaves and colors everywhere but it just didn’t happen that day. We spent 6 hours cleaning this pool out before he even got to try it the second time. It's so hard to tell but there is so much vert in this pool you gotta fly at it. After at least 2 hours of trying it just happened, it was just John, our friend Jake filming and me. It was magical. The clip is in the new creature Gangreen video." 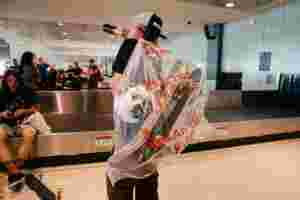 "Not much of a story about traveling with one of the crustiest SOTY’s, except that it's always a god damn pleasure. He travels light but sometimes you get forced to check your board and the ball. I’ll drink to that."

"I got excited to shoot this when Jah started giving it a couple tries. There was all this ugly green wax all over the ledge and I tried to use some excess griptape to sand it off. What I ended up doing was just making the wax stay permanently on the ledge and not come off ever but it also made the ledge butter smooth. Just going to town with the finest grit rub-brick in my hands." 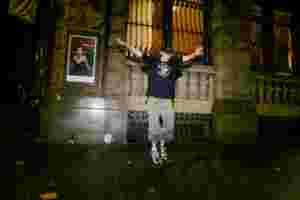 "Just wanted to throw this in here, this is the funniest skate photo I have ever had published so far. Shanahan is freakishly good at a few freestyle moves specifically the Todd Falcon “Falcon stomp” to primo. He probably went to the casino and won big after this was taken." 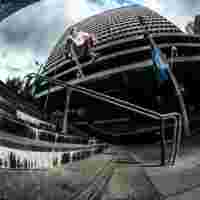 "Sorry, that Shanahan photo reminded me that just earlier that day Wes had switch tre’d over the classic Martin Place rail. He also did it in only 5 tries but he didn’t like it. So he also did it again in 2 more. AND he also did it on Evan’s board. Wes is the best stair skater I have ever seen, I don’t know if he’s ever bailed a stair trick before." 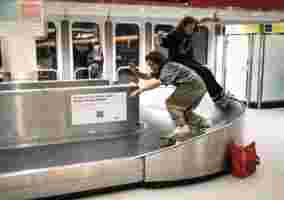 "We just got off a horrible flight to Germany very late and I noticed the carousel for the baggage claim kinda looking a pump track and mentioned to it John. Everyone was kind of over it so Gardner and Evan hopped up there and just started skating around this thing as fast as they could. What really tripped me out though was like no normal bystanders even batted an eye about it. Some people including the guy in the back didn’t even look up from his phone. Man I hope we can all go on trips and drink and eat good food and just get to see each other soon!"

The new flagship of DC Shoes