kiosq was founded in 2019 by Mark Smith, Marcel Speiser, and Piotr Zapasnik. Three friends, who grew up in Düsseldorf and spent most of their lives skating together. Each of them made their individual way into fashion, music, and design, but they finally joined forces again to create something in skateboarding – without being influenced only by skateboarding. We as skaters are proud to see our urban environment with different eyes, but there’s also another layer than just recognizing the fun a simple ledge can bring you. If you dig deeper and dive into the history of the place you’re living in, you can find thousands of interesting stories and inspirations at every corner; and doesn’t the saying go like, “you have to know the past to be able to shape the future”? In order to show us their roots, the kiosq team went on a trip to the Ruhr area.

The Musiktheater im Revier (MiR) [Music Theater in the Ruhr] in Gelsenkirchen was opened in 1959 and is considered one of the most important theater buildings of the post-war period. Architect and town planner Werner Ruhnau has, like the civil engineering of the Middle Ages, combined all the arts together to create a total work of art. The concept for the foyer includes large blue murals by the artist Yves Klein, who in his most active time caused his mischief in the Rhine-Ruhr area and had a major influence on our first shirt design. Over the course of my design studies, I had the honor to work on a project together with the then 90-year-old Werner Ruhnau, which has awakened the fascination for this hidden cultural jewel in the middle of the working-class area that still exists today.

Swiss artist Harald Oskar Naegeli became known all over the world in the late 1970s when he sprayed on walls in Zürich. While the general public and the authorities saw it as nothing more than property damage, intellectuals and artists attached great importance to the drawings. After standing trial in 1981, Naegeli was fined and sentenced to nine months in prison. He evaded execution of the sentence by fleeing to Germany, but an international arrest warrant was issued and he was arrested on August 28, 1983. Despite the intervention of numerous artists, writers, and politicians, he was extradited to his home country in 1984. After six months, Naegeli was released from prison and moved to Düsseldorf. German politicians and artists, like Willy Brandt and Joseph Beuys, were among the great admirers of his art and fought for his freedom. Naegeli's pieces have shaped us since childhood as they have become a permanent fixture in the cityscape. Through his sprayed figures, slogans, and messages, Naegeli wanted to express his protest against the urbanization of the city. His aim was to demonstrate against its increasing uniformity and uninhabitability. His translation of rapid physical movement into a graphic language bears so many similarities to what we do that we inevitably feel connected to it. 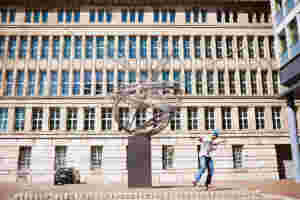 The sculpture by Norbert Kricke was placed on the site of the neighboring Mannesmann building on the banks of the Rhine in the late ‘50s. In 1964 it was presented at documenta III in 1964 and, in 1967, at the World Exhibition in Montreal. A signal of new beginnings can be seen in the early work of the Düsseldorf-based artist, whose central theme was the interplay of space and time, but the aspect of movement also finds great relevance here. “I don’t want real space, I don’t want real movement, I want to represent movement,” he once said. The concept of representing movement and the resulting aesthetics has made Kricke a major influence on the cityscape, this spot, and the art scene in general.

Kraftwerk are regarded as the forefathers of electronic music and, increasingly often, as the most influential music group of all time. The legacy and spirit of the band extends to our circle of friends. The Kling-Klang-Studio is the privately-run recording studio of the band. The name is based on the first title of the album Kraftwerk 2. The studio was located in Mintropstraße 16 in Düsseldorf until 2009 and was then moved. Still today, the studio functions more as a cultural institution where people occasionally meet and where concerts take place. Jan Schulte aka Bufiman, who provided us with one of his tracks for our first video, has already performed there and counts Kraftwerk – just like us – as one of his great influences; as the cross-border spirit of these pioneers seems to have been transferred to almost every artistic output of the city. 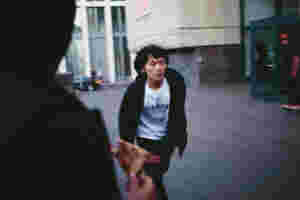 The club and its forecourt have become a skate and party spot over the last 15 years. Since it functions as the Kunsthalle’s [an exhibition hall for contemporary art] museum café during the day, the shop has a unique interior design. The club’s elevated entrance is accessed by a seven-step staircase, whose handrail was also skated by Jamie Thomas at a demo. The skate and chill potential of the forecourt and the surrounding museums gives the spot a unique flavor, which continues in the club with a minimalist interior, very liberal door policy, and a music selection that is unparalleled in Germany. The permanent salon crew mixes with the atmosphere of kiosq. The avant-garde spirit of the small club feels as if it carries the Kraftwerk legacy on to the present day and places the club among the 20 best clubs in Europe and even worldwide every year. 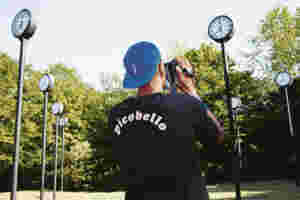 This installation, consisting of 24 station clocks, is located in Volkspark and has always had a high iconic value for us. The clocks run synchronously, and yet, one can never see all twenty-four together. Time has always passed from one clock to another. In reverse, we walk into the future. If you take the train, the clocks bid you farewell and welcome you out of or into the city. The station clock, as you see it almost everywhere in Germany, embodies the extremely matter-of-fact design of the post-war period and, in our world of inspiration, has become a classic like the Reclam book covers [German publishing house famous for its yellow paperback editions]. 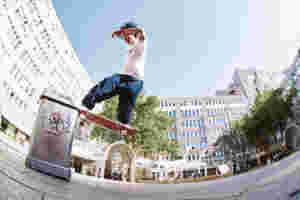 In an earlier era of our lives, Bertha-von-Suttner-Platz was the spot where everything came together. It was either the meeting point and beginning of a skate trip or the destination itself. However, we weren’t exactly welcome at the spot we considered home. Apart from the police kicking us out over and over again, we’ve had to face a very persistent owner of a coffee place, who made it his purpose to get rid of us. Apart from constantly struggling with jurisdiction, Bertha-von-Suttner-Platz was a place of contradictions. While it was a spot for us to seek positive affirmation in ways of meeting friends, succeeding in landing tricks, and gathering footage or simply hanging out, it was also a place with negative connotations. Being there meant being in an environment predominantly characterized by “failed attempts of life”. Apart from hosting junkies and drug dealers, it was, on the flipside, a square graced by art, sculpted by Horst Antes. A place between agony and grace. A place of mixed emotions as well as strong memories. One of those memories is associated with the many times we had to run from the police. As it was a recurring event, we developed from simply running away to seeking shelter for a few minutes until we were safe to go back. On a little square behind the spot was a place we’d usually get our supplies for the day such as snacks and drinks. That same place became the place we ran to in order to hide. That place was a “kiosk”, and the kiosk eventually became synonymous with shelter.

With influences from Kratwerk to Salon des Amateurs, kiosq are perfect to create a playlist.

Monsieur Leon Moss has something new on the menu. Get it in the drive-in.

30 years after the fall of the Berlin wall the German adidas team skates both sides of the former divided town.