Although skateboarding is primarily fueled by individuality, there has always been a surfacing of certain personalities whom others gather around and who unleash creative forces by leading as an example. Jim Thiebaud is undoubtedly such a person. In 1990, he founded Real Skateboards together with Tommy Guerrero and has been the vice president of DLX for many years now – the company that is next to Real home to some more of your favorite brands. He welcomes us to their headquarters with a gentle handshake, calmly takes a seat at this office desk, and answers our questions thoughtfully and with a soft voice. Yet you don’t need a deep understanding of human nature itself in order to realize that he still takes a clear stance in times like these, when most people confuse political action with lip service on social media, and is willing to stand up for his opinion. Skateboarding could use many more individuals like him.

How has San Francisco changed over the years in general and skateboarding-wise?

The city has changed such as skateboarding has changed. Skateboarding is different now than it was 20 years ago and you are talking about a city that has undergone change with technology, and influx of money into the city has prized many people out of the area. But to me, it doesn’t seem much different to many cities. The people who are growing up in SF now are just redefining the places that they skate and how they skate them. It is like a new book to them, so I think it still offers the core experience when you come to SF and that’s the hills that you can’t find anywhere else. I don’t think it is necessarily any worse or better to skate in SF now than it was a long time ago.

How has living in SF changed?

I live in Berkeley, I commute 40 minutes over the bridge every single day. It’s impossible to live in SF, it’s super expensive. It is really sad to see when families get pushed out of the city, a good amount of skateboarders will be pushed out as well. It is a thing that lives and breathes in with the youth. If you don’t have kids growing up in SF, you will have less skateboarders.

"I got a physical death threat mailed to me"

And how do you see the current state of the whole US compared to back in the days when your Hanging Klansman board was released?

Well, it is sad that 25-30 years later a graphic like my first is still as relevant than it was back when we first did it. I would have hoped that things would have changed more. But with the new climate, with Trump sort of silently supporting questionable beliefs, it is just as relevant as it was and it is sad to see. It sucks. I caught a lot of hate personally when we did that board. I got a physical death threat mailed to me. I caught a lot of hate when we first did it and I catch a lot of hate when we do political things here at DLX. I get text messages and comments about, “You are ruining skateboarding!” or “Keep politics out of skateboarding!” I fully don’t understand that. When we started Real, it was to try and do really great shit with and for skateboarding. And it was always acknowledging the fact that this platform of skateboarding gives you this really loud voice to try and do great shit, to try and help people, to try and change the world, to try and express yourself, and that is why my very first board was that Hanging Klansman. And fast-forwarded to today, when somebody like Trump gets voted into the White House or you see some injustice, you wanna make a graphic with the funds going to someone beneficial and get called a kook for doing that. It is like I remember going to a Dead Kennedys show and hearing somebody in the audience yelling at Jello Biafra, “Keep politics out of punk!” or listening to Public Enemy and someone yells, “Keep politics out of rap!” and I think it is complete horseshit, especially when it comes to skateboarding, that this is a vehicle that we have to express ourselves. And since day one it was always about trying to make a message. And I get a shit-ton of fucking hate, “We will never support your company!“ – okay, so be it . Who you get the hate from? Not skateshops, I hope. *** It’s not from shops and I am not gonna say the one single persons. I get a lot of hate for it that I don’t quite understand and it seems to me that maybe the people haven’t been following what we have been doing the past 27 years. 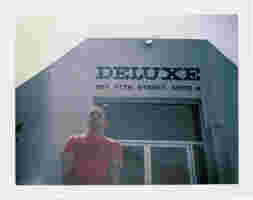 I think it’s crazy to say, “Keep politics out of skateboarding!” I mean, you don’t have to have a political message as a skate brand, but if you want to, you have all the right to do it.

I think we are supposed to. We do a lot of work here at DLX to try and do good shit. We make mistakes, we do dumb stuff, we do bad stuff at times but underline we try to do really good shit. And I feel like you are supposed to do that stuff to raise money for different organizations. You are supposed to take a fucking stance. I read in an article that you supported a skateshop when they asked if they could print your Klansman graphic on shirts to mobilize people against a KKK rally. *** There was a rally going on in the South and I have a friend who works at a skateshop and he asked if I could make shirts they could wear and I said, “Fuck no, you just go and make the shirts,” and I can’t remember if I said just give them out for free. I just let them make the shirt, so they had a message. I mean, every time we’ve done something with the graphic, the money has gone to different foundations.

And you really got a death threat for that graphic?

Yes, printed letters back in the days. When we first released it, Tommy and I thought it was funny to do a tour to the Deep South in the US right when it came out. So our first tour was to put it right into their faces. I am not saying everyone from the South is racist. You just go where you think it is kind of hot.

You said that the money goes to foundations. You also do things like Actions REALized with Real.

Yes, the latest one was with seven-year-old Nate Viands. We met him three years ago. He got diagnosed with leukemia and his dad was an old skater. We became friends with them and made a deck with Nate’s name on it after he was done with chemotherapy. Instead of making one type of make-a-wish thing, we try to give kids like him every couple days another reason to keep going. And three years later, he is cancer-free and we brought him and his father out here. We did a pro board and the funds for that go to Philly Children’s Hospital. Like I said, you are supposed to do shit like that and I mean, it is punk as fuck to do stuff like that.

Getting back to change, or change that sadly hasn’t happened – how different is it to run a skateboard company nowadays?

I think at the core of it, it is very same as it was when we first started it and that was skateboarders trying to do something good for other skateboarders and you just keep that in your heart. You confess whether you should or not do things and try to make good decisions that benefit as many people as you can. I think the coolest thing right now, and that is not just about companies, is about the power that the youth has. They have the power to do anything they want without asking permission or following rules or following a course that is set for them. They have the power to film a video and put it on YouTube and get as many views as a pro skater. If their shit is good, they can start a company without asking permission, make their own pro riders without having to go in a contest circuit. They can create their own media. They can do that all themselves and I think that is hugely empowering for the youth and it is up to people like us who are doing companies to understand how empowered and smart everybody is now. It is a very leveled playing field and you can’t get away with bullshit as you shouldn’t be able to. It’s pretty cool to see. I’d much rather compete with other skateboarders doing their companies than publicly traded cooperations that just come in to try and make money. I try and help as many skaters I know if they start something. Because I think that is what skaters are supposed to do. They grow, pop off, and have the same challenges like DLX has. You gotta take care of your employees, your shops, you gotta take care of the kid who is riding your board. If he breaks it, you gotta return it. Everyone has to deal with this.

It’s easy to start something new, but a challenge to stay in business.

You know, we never wanted to be anything other than just a skateboard company and do it as good as we can for anybody that backed our stuff. I think we come here every single day with that same drive and same passion and we’re skateboarders and maybe that has been one of the reasons we have been able to sort of sustain in ourselves. But I personally feel incredibly lucky to come here every day and get to work with the people I work with and lucky about the skaters that ride our stuff. I know they have a shit-ton of options of things that they could buy. I just wanna be doing the best I can for them and keep enjoying it.

We digged deep into the archives of the art department of Real, Spitfire, Antihero, Krooked, Venture, and Thunder with an interview with Andy Pitts.