Sitting and skating are not directly associated, and even seem a bit contradictory at first. David Lebuser challenges this view by promoting the practice of wheelchair skating. Living with a disability motivated him to actively deconstruct stereotypes, leading him to create the NGO Sit’N’Skate. By showing that a wheelchair can be used to ride, David empowers a new generation of riders while challenging the preconceptions of what skating is about. We talked with David about the work he’s doing, how to make skateparks more accessible, and what would be his dream obstacle. 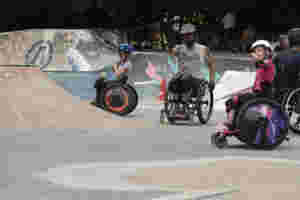 Hi David! Let’s jump right into it, how did you get into wheelchair skating?

I was in the hospital for a while following an accident, and I remember some friends told me ‘aye at some point you will do wheelies’. I didn’t understand how I would potentially do that, before I saw a video of Aaron Fotheringham. When I switched from a hospital chair to a better one in rehab, I started practicing every day! After learning how to get back on the wheelchair after a fall, I decided to go to the skatepark. The first time I went there I tried to do a kick-turn, of course I fell. That’s when I discovered that skating is the shit: it was the best feeling ever! From this day on, the park became my wheelchair playground.

What led you to create Sit’N’Skate?

I wanted to give the opportunity to other people in wheelchair to go and skate. It was a bit hard at first, as I wanted to give wheelchair skating lessons or do events at skateparks. But a lot of them refused or were skeptical because of insurance or stuff like that. I sometimes even got kicked out of the park. But then a local skate association from Hamburg contacted me, and together we started the first skate clinic in Germany: it was a great success! It quickly became kind of big, we started doing more lessons and workshops. We also realized that the kids were learning to use their wheelchairs and gaining everyday skills by playing around, which made it even better. We also know from experience that living with a disability is already super expensive, so it was important for us to keep it accessible to anyone by keeping everything free. It is with this mindset that we started Sit’n’Skate.

You mention the use of skateparks, do you think there is a way to make skateparks more accessible?

There are quite a lot of skateparks which are not accessible to wheelchair users. The modern way of building is so much better already, the concrete offers a lot more variety. I sometimes go and meet with all the local skaters to talk about how a skatepark should be or future projects, and when talking about wheelchairs they generally think about flat surfaces – but it’s not that, we also want obstacles! It is starting to change though, as we now have some good examples of how to make a park accessible. Recently in Köln they did a great project for the skatepark, and put some cool features that are fun for everyone. Skatepark rules are another problem that we don’t always think about – there is generally no mention of wheelchairs. Once in Fribourg there was a girl in a wheelchair that got kicked out of the park by the police! So that’s the next step: officially allowing wheelchair users to participate.

It can only get better now!

For sure, but skatepark designers need to be bold and fail on some things. You have to try to learn, skaters especially know that. Having unique obstacles will also give something back to the whole community. Skating is creating, using and reusing what you have, it’s thinking. Accessibility can bring newness and creativity to skateparks, like a breeze of fresh air. In Köln there is this wavy feature which you don’t need to pop onto and it is great! Often I’m told we don’t have any wheelchair skaters here, so we don’t need to adapt anything. It’s a circle: if you don’t build something accessible, then they won’t come, but if you create something accessible to all then they will start coming.

"The first time I went to the skatepark I tried to do a kick-turn, of course I fell. That’s when I discovered that skating is the shit: it was the best feeling ever!" 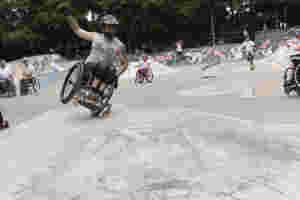 What would be your dream obstacle?

Personally, it’s something I wanna build with some guys from a DIY in Hamburg. It would be a sort of 3 in 1 obstacle: a bank to bank, with a tiny gap in the middle that would not stop you, and a rainbow rail. That would be my dream funbox!

Nice that sounds great! Even to skate, having all these options in one is nice.

Yes and in this DIY project skaters were also really into it. I hope we can keep the space and get into the building of this idea.

And what would you say is your favorite trick?

The handplant – so hard but so nice to do. Even after years of working on it, I need some tries to land it on new spots. I’m currently working on landing it on a street quarter! Haven’t landed it yet so I wanna go back soon ahaha. 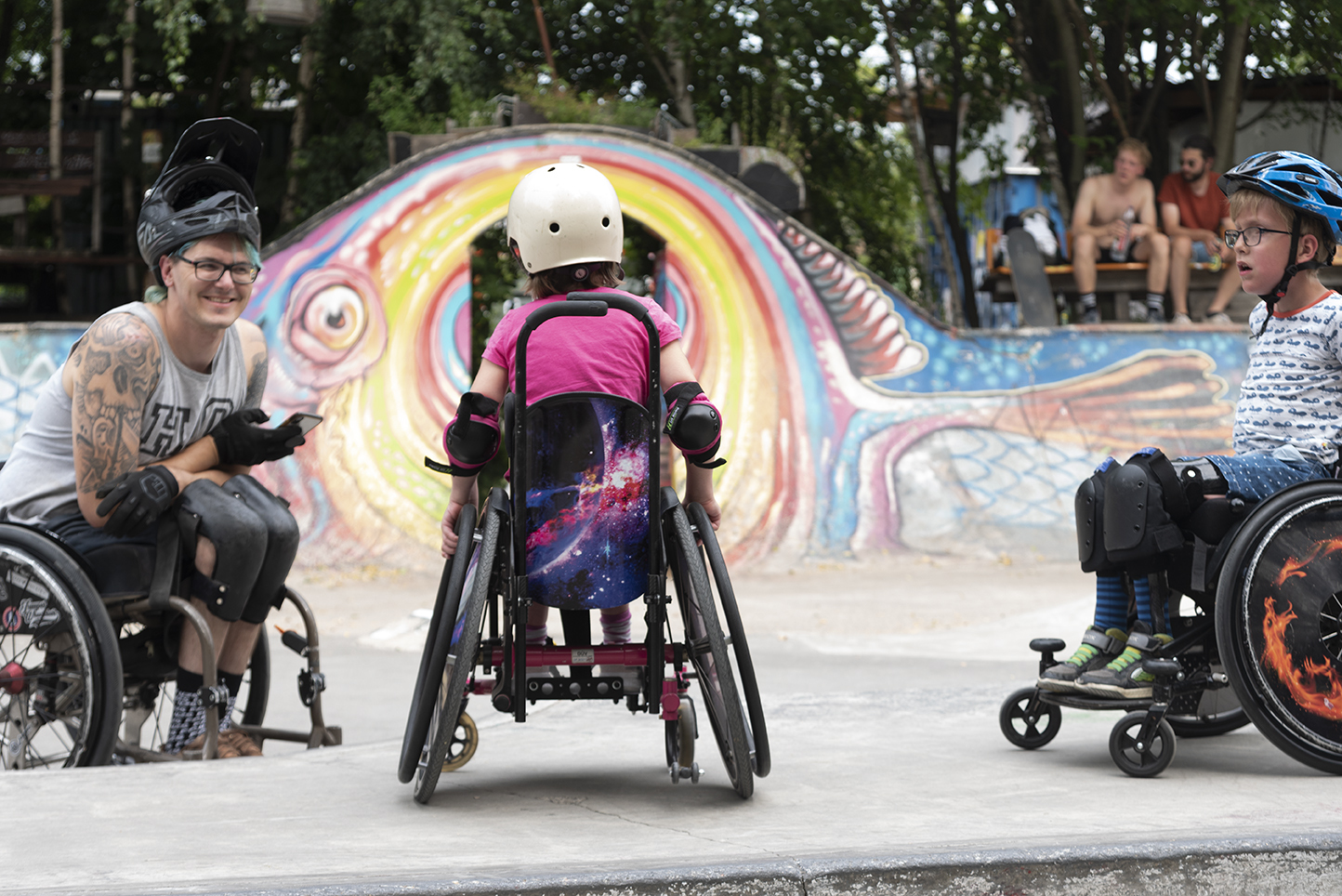 Do you have any advice for anyone wanting to get into wheelchair skating?

Get a helmet! You can jump off a skateboard but not off a wheelchair. Find your spot where you feel comfortable and go on from there: talk to the people, cheer, film others. And of course you’re also always welcome to come to us.

Awesome thank you! How can we contribute to the development of Sit’n’Skate?

We are very thankful for any donations and support. The website is in German, but we have a part to donate. What we also always need is visibility, if you share our stuff into your bubble then it’s already great! 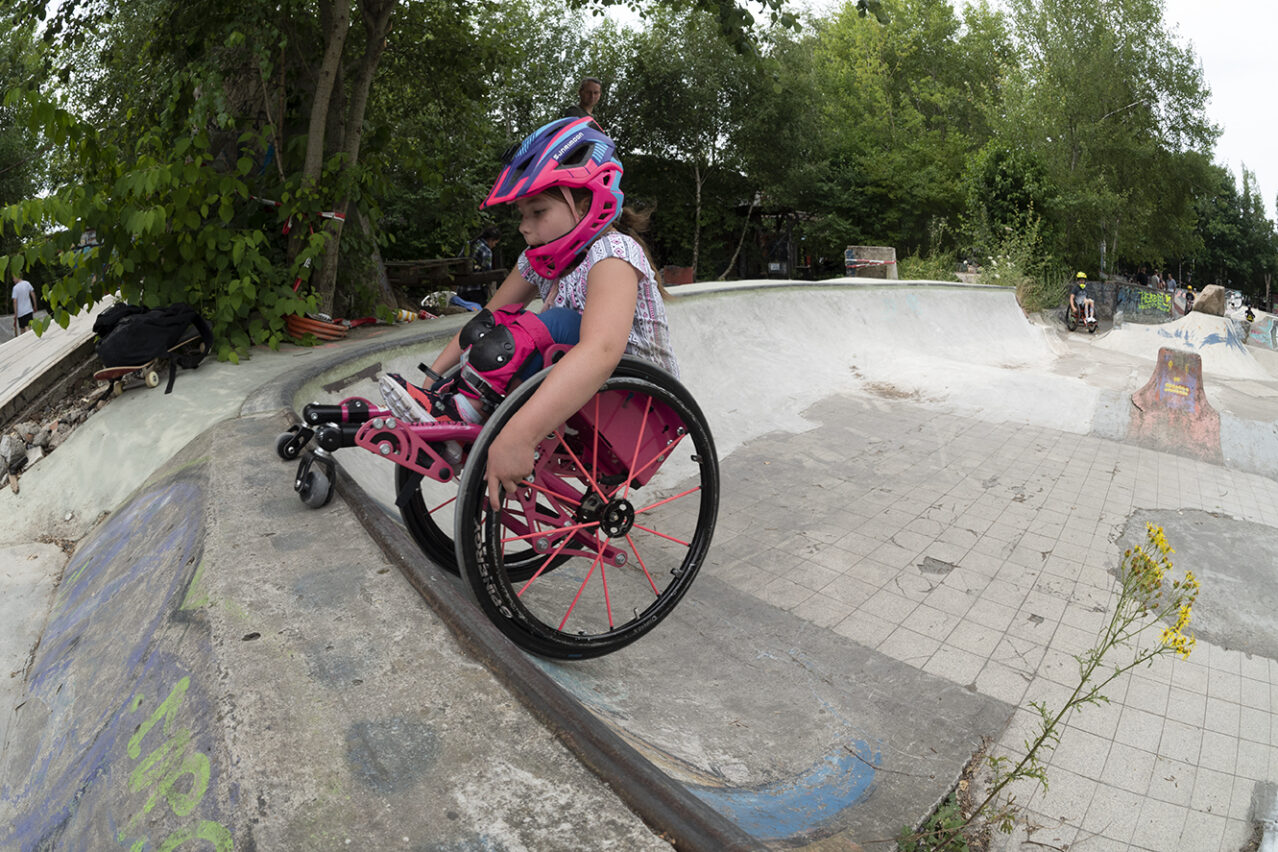 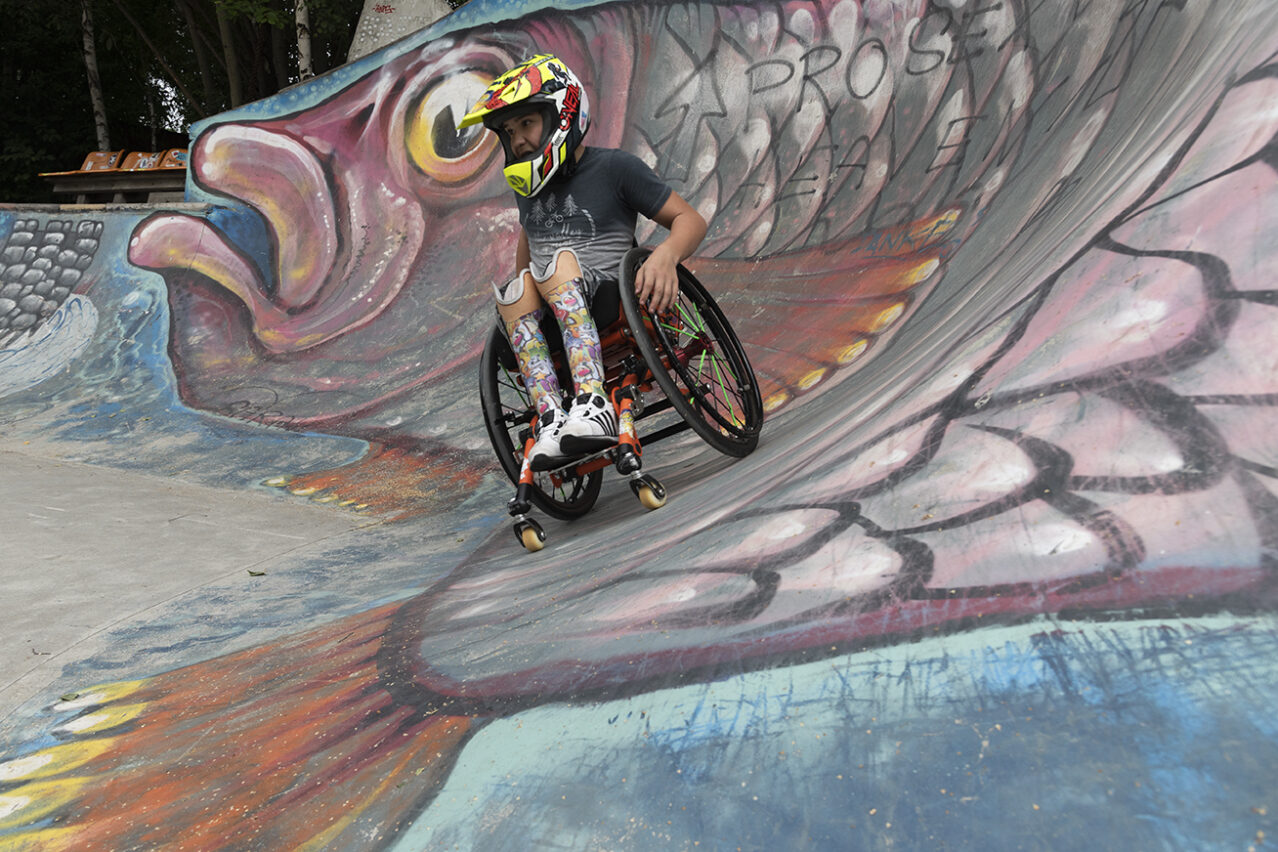 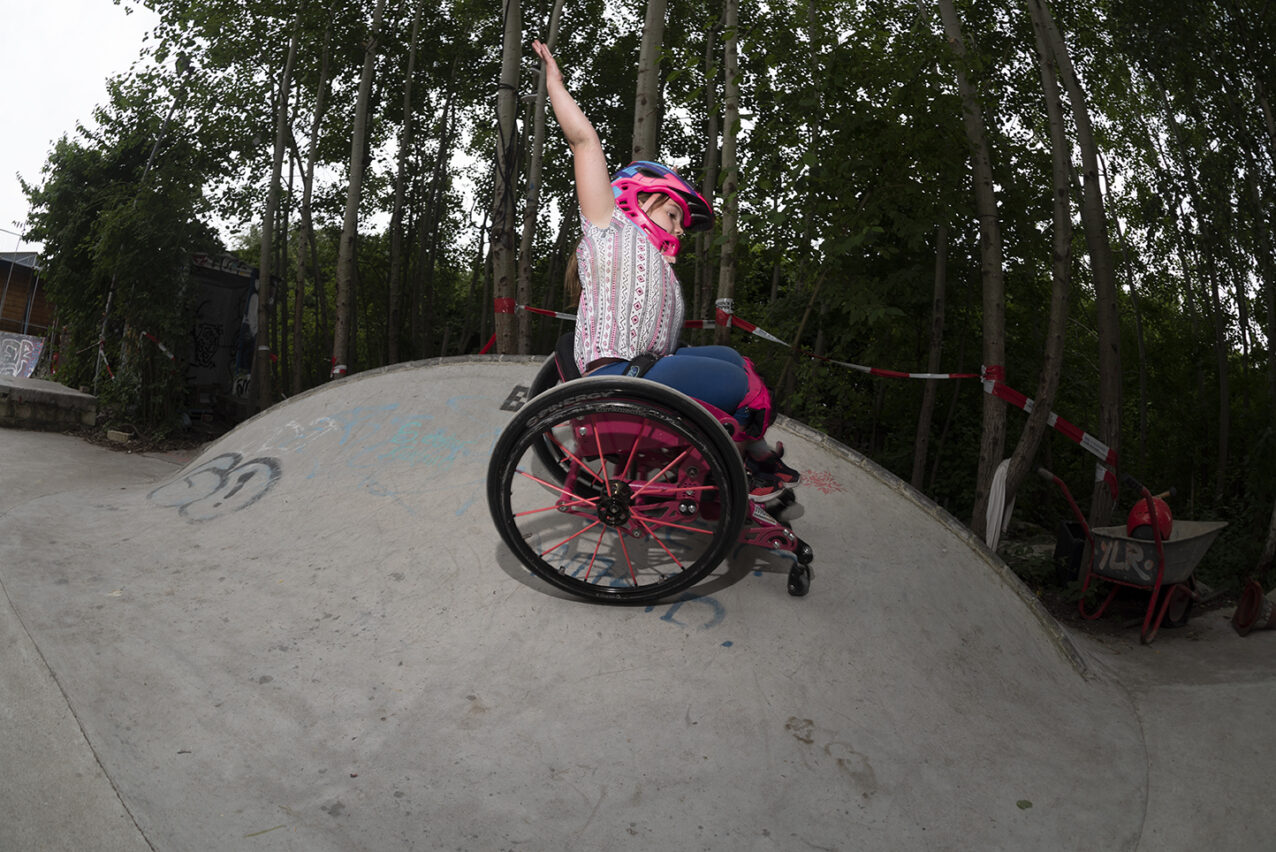 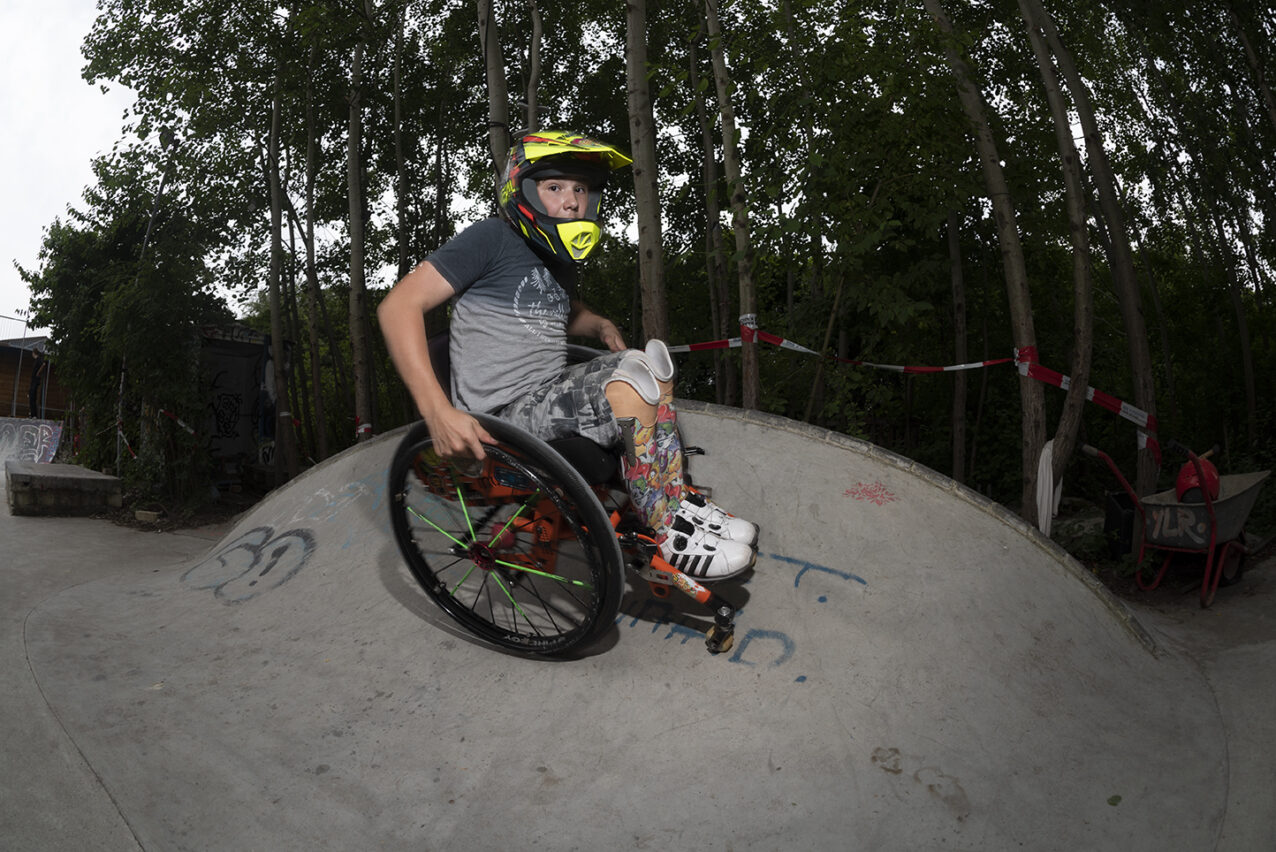 As the woman and queer skate scene is booming, we talked with Nanja van Rijsse from Women Skate The World about the place of gender in our community.