Even though hailing from a small fishertown named Voledam at the Markermeer, Bart Buikman never really thought about getting on a boat and peeling fish from the nets like his ancestors possibly did. Living only about 30 kilometers northeast of Amsterdam, he became attracted by skateboarding at a very young age and his talent soon became well known all over the Netherlands. Now, at almost 20 years of age and being the latest addition to the Titus Tornados Team, Bart has released his first real street part. We figured this was a great time for a little chat.

Hey Bart, you live in Edam, that’s where the world-famous cheese is from, right? Is there a big factory you can visit and eat fresh cheese from the production?

Nah man, there’s no real factory, it’s more just like a small business. Actually I don’t really know, but I think it more likely describes the cheese and how exaxtly it’s coming from the area in general. You can go into small shops and buy cheese, that’s pretty much it. [laughs]

There are probably not too many skatespots than in this small town, right?

Basically not any at all. I started in a small skatepark here. But all my friends skated there, too and when you start skateboarding, you are not really aware of what’s good and what’s not. I just wanted to have fun and learn it, you know. When I got a little bit better though, I started going to Amsterdam into the old indoor park and I’ve never stopped since.

People from outside the Netherlands always have the feeling there are not too many streetspots in Amsterdam, is that true?

In Amsterdam there are tons of spots but you gotta know where they are. [laughs] They are kind of spread out and not really in the centre where you as a (skate-)tourist might go in the first place. More like in all the surrounding suburbs. Kind of secret and a lot are also in towns just outside and around Amsterdam. So, as a tourist, chances you’ll see those on accident are pretty small.

Even though you grew up skating in Amsterdam, you don’t smoke weed, right?

[laughs] That’s true man. It’s weird, kind of, but I saw everybody doing it at a pretty young age and thought, then I don’t have to do it because everybody does it. It never really attracted my attention trying it. 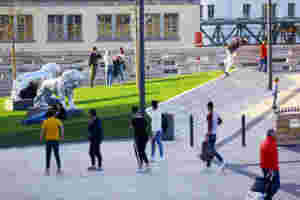 Even though the Netherlands are a fairly small country, it always seemed to have a really strong skateboarding scene…

Yeah, the scene is really big. And in Holland, also due to it’s small size, everybody pretty much knows each other and likes to skate with each other. There aren’t really crews from one city that hate on people coming from a different town or some weird shit like that. Everybody is befriended. And using the train, you can get from one city to another so quick, by car even quicker.

What’s the best city for skateboarding in Holland, from your point of view?

Puh, difficult. I mean, I personally don’t really care where I skate, for me it’s more important who I am skating with. A good crew is all that matters. But besides that, I would say Rotterdam and The Hague; and maybe Amsterdam, if you know the spots.

For some reason, maybe because of your social media output, I’ve mostly seen park footy from you. Is that your first real street part?

Well, I’ve been on a couple of street trips, to Copenhagen or Barcelona, and had some footy in videos from that, but just as of a solo part, yeah, that’s pretty much my first one. And Corona right now even makes me skate more street, because the parks are closed, so that’s kind of a good thing about it. But other than that, I also just like to skate parks.

"Corona right now even makes me skate more street, because the parks are closed"

So, are you in the Dutch Olympic-team?

Yes I am. [laughs] But, well, I am honest, the chances are very small for me going to Tokyo; if it’s even happening. But for me, I am thankful and having fun going on trips with the others. Going to all those contests, gaining experience, you know. And with the other „athlets“, Rob Maatman, Sewa Kroetkow and Douwe Macare I get along very good as well and they can teach me a lot.

Isn’t there la TF only for the Olympia-Athletes of the Netherlands?

Yeah, they built a big park for us to train.

And it’s not a public park, right?

No, it’s not, but you can bring some friends, so it’s not as strict on that. It’s in The Hague.

You’ve been to Tampa AM, too, right?

Yeah, in 2018. I wanna go there again this year, if it’s happening with Corona. It was an awesome experience, seening all those best Am’s from around the world skating was a big inspiration. Even just seeing the park you’ve seen on video so many times stoked me out. 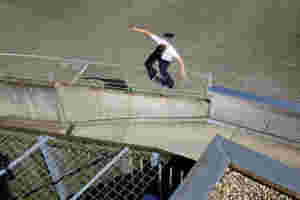 So what does Bart do when he’s not skating?

After I finished school with emphasis on marketing I started working part-time and recently I got a bit into making music. I got a friend who is really good and he teaches me a bit about Hip-Hop and Trap beats… I just started learning to play the piano recently, too.

Uhhh, sick… Where do you work then?

At an online shop which sells braces for knees, for example. We got them for everything, you know, like after you had an injury or surgery and you need these things to help getting back to normal motion.

What did you want to become professionally when you were a kid, though?

Well, my parents taught me pretty early I was already „something“ – I was Bart, and that’s all that matters. But from the age of 11 I already only wanted to become a pro-skateboarder.

Victor Cascarigny is a new face from France – coming in with a full blown interview and his personal top 3!

Young Frenchman Victor Cascarigny’s bag of tricks is more interesting than what Santa got in his bag.