Austyn Gillette - just breathe (and don’t give a…)

At the age of 29, Austyn has seen more of the world than most of us might see in our lives. Starting off as a hungry skate rat, quickly landing himself a spot on the best teams and in the best videos out there, and growing up being one half of team handsome, Austyn has not been shy to shake things up and find his own road in the past few years. He has been releasing records and music videos, creating his own vision of a brand with his friends, and still constantly amazes the world with his insane level of skateboarding. We shot some photos with Austyn on the road in Paris and called him a little later to lift the curtain a little bit and listen.

Right when the issue with his interview in it got released, Austyn Gillette visited Munich together with his Former partner and surf legend Dane Reynolds. For sure they had to check out the Eisbach river wave.

Hey Austyn, what’s up? Are you driving?

Yeah, a little driving. I’m driving back to the desert.

What’s happening out there?

My friend, she bought a house out there. We walk the dog, cook some food, just doing simple things.

Sounds good! Does traveling the world ever get old for you? You must have been traveling pretty much for the last 10 years straight, right?

Yeah, shit. I started traveling internationally when I was 15 and a half. That makes 13 years of pretty consistent traveling. It’s exciting, the unknown. Sometimes, it’s good to not be in LA too much just because I know it so well.

How did that Paris trip happen?

We were in London before, it was our second Former trip out to Europe. We had Jamal [Gibbs] on the trip as well and met Alex [Pires] shooting, so there was more intention on the trip to kind of make something real, not just put it on the internet.

"Half of the teams that are successful fucking suck. Their skating is like uuuhhh, but they are “famous”."

How did you like it? It was very hot when you were there.

Yeah, it was pretty spicy out there. We were staying just over the water in the 3rd arrondissement by that sick curb spot people skate. We were pretty centrally located, so it was very easy to get around. We didn’t need to use public transport and just skated around. It felt like what New York felt like when I was getting to know that city. It was just a version of that for me.

Do you want to tell us a little bit about Former and what your role there is?

I hope people will know who’s on the team: it’s Jake Anderson, Jamal Gibbs, and then myself. We’re filming for a video project that we wanted to put out in November. But since there’s a lot of stuff coming out towards the end of the year, we kind of don’t want to be a part of the mess. We want to have a project that’s focused and sits on the shelf for maybe a week or longer. We went to Australia, then the Europe trip, but we have not been filming too much in LA. That’s my goal for this project, film as little as we can in LA. I personally wanted the guys from the team to experience getting out of the country. I’ve always been a little bit more lucky, and it’s more pleasing to see something new than trying to compete on the two spots in New York or the two spots in LA. For this project, my intentions have been a little bit more colorful, a little bit more foreign, also with the intention of trying to get some European guys to ride for the team as well. So the places we were traveling are places where we want to have a presence.

Can you purely concentrate on skateboarding on these trips today or do you need to help out on the side?

Yeah, I have been helping with a lot of things. We have people shifting roles, we have parted ways with some people that worked for us in friendly ways, just to get back to what our initial intention was – which was to showcase who we are and make things we actually wear. That shifted over the past six months or so. My brother is doing the domestic sales and some international. I’m talking to distributors, shops, and spreading the gospel, a lot of that stuff comes my way: organizing catalog shoots, organizing social media, and staying on top of that. Sometimes, we’re having other people do that for us, so I don’t have to look at that being on a skate trip. We’re a small operation at the moment and it’s starting to get some traction, so I’m trying to do as much as I can.

How do you balance it with all the other stuff you do?

That comes in waves, but we’ll see with the video. That is gonna show!

"I think that’s the important part, to not be constantly focused on what other people are saying about you…"

How do you generally keep going on the board? It feels like you have been in the zone for quite some years now…

I started young. I have been there on the Habitat team in times when people were buying DVDs. That was a long time ago. It didn’t feel like how it feels now, where there is this constant need to feel relevant or whatever the fuck it is. You have to be your own fucking manager, put out weird videos, and do all that weird stuff. It’s a little bit different, but it has been going like that for a while. I didn’t grow up like that, it happened when I was 17 or 18, and I had been in a few videos by then.

Wasn’t there a big tumblr phenomenon for a while about you or you and Dylan? Is there still anything like that?

I don’t know. I don’t really look at websites. I was aware of it at the time and people sent me photos of that stuff. People weirded out, but it seems it went.

It seems there have been a lot of changes for you over the last few years regarding your career and sponsors and also Former, music, and all that coming in…

Yeah, this is all stuff that is important to me, stuff I kinda wanna share. Music and all that is a part of me, I’m not sure if people that come from skating are following what I do or give a shit about what I do. I get excited about music, that’s new territory, it has taken me to new places and I’ve met new people through that. With skating, it has changed for a while already company-wise. For me, it keeps me going when something new comes up and people do a little bit more, shine a little bit more, and work harder for the project, kinda get lost. There is a good feeling in having something stable as well. There is just so much shit out there that’s cool right now that won’t be cool in a few years, but it’s hard to see that. It seems so strong, but there has been no fucking company on the planet that over the course of five or ten years hasn’t made some bad decisions. I mean I can’t predict that shit, I get excited about something and go for it. Trying the unknown.

So what’s the talk about your own board company then?

Yeah, there’s been a few things, it’s just… I don’t know what I’m going to do there. I have a little funny name I’ve liked for a long time, but I’m not selling it or anything like that, I just want it to exist. If something else pops up or if I’m excited to do something new, it wouldn’t really affect anything. Guess if it’s not on the market, it doesn’t really matter. It’s hard because people pull you in different directions and tell you what’s cool and I’m kind of tired of that. They also don’t know what the fuck is cool. Maybe people are waiting for the next thing to make fun of? Skating is fucking lame in that direction, nobody is doing anything new. Half of the teams that are successful fucking suck. Their skating is like uuuhhh, but they are “famous”. The world of skating is going. It’s hard for me to dictate that I’m just doing what’s exciting to me: working with friends that are creative and do not just have a skate brain. Over the past five years, I’ve started not caring or really watching it. It doesn’t get me motivated. 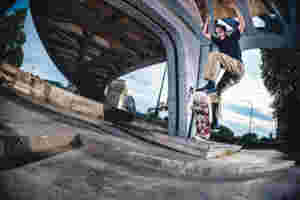 So is skating becoming a much more personal thing for you?

I think that’s the important part, to not be constantly focused on what other people are saying about you, trying to dictate what you do. You can’t even be yourself. You can’t even be happy, you’re kind of playing you. People pull the strings, make you feel a certain way. I did all that as a kid. I think that’s just a waste of energy. I sense skating with Former or with other companies, that’s the stuff I get excited about. It’s about keeping close relationships, using music that I like, and going places – that’s the only thing that’s important to me. That’s all something I like to share with people.

"If you look at numbers on an app, that is your value. It’s not related to anything, even sales, it’s really bizarre, but you’ve got to play that crazy game."

Looking at your level of skating, all those companies must get at you heavily?

I guess it’s all just a timing thing right now – and there’s a lot of people and people are good! Also, if you look at numbers on an app, that is your value. It’s not related to anything, even sales, it’s really bizarre, but you’ve got to play that crazy game. I’m not really in a rush to do anything. I’ve never been in a rush to find anything. I guess the decision will present itself.

How did the musician in you come to life?

I think I started playing music around fourteen or fifteen, and at twenty or twenty-one I built a music studio in my backyard and started developing sounds and organizing music. Then I started spending my time during the nights just experimenting with stuff. I don’t know, that’s what it sounds like. There was no schooling or anything, I was mainly just taught through friends. It’s important for me, but it’s also a time-consuming thing. I don’t live at that house anymore, so I don’t have that space. Former takes up most of my fucking time and I’m not going to be writing about spreadsheets! I can’t write when I’m sitting at home. I need top-experience stuff to write about it, that’s where it comes from usually. What I just put out, I did while I was on a three-month trip to Australia. I’d like to do this annually, that’s a personal goal of mine! It’s pretty difficult while traveling and filming this much, plus being the team manager on the side. Generally, I’m prioritizing a lot of shit and music is not my priority at this point – which sucks!

In the new Former vid Austyn Gillette and Jake Anderson skating through the streets of Mexico – on a damn high level...