You can tell Alexander “Zander” Mitchell likes his home because he has a globe as his profile picture on Instagram with an arrow pointing to a small patch of earth in Canada – a country that has already brought up many pros with a lot of finesse in their skating, one of the most insane contests ever, and a more interesting podcast than its North American brother. The red maple leaf has stood for quality in skateboarding since forever and you can see that virtue again in Zander’s skating – whether he does one of his insane ledge moves just for social media or goes on a mission to get clips for the upcoming Dime video. You should scroll through his Instagram and see that finesse for yourself; and that’s exactly what we did as well before sliding into his DMs for a quick chat. 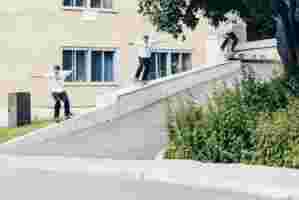 You are living in Montreal. Where are you from originally?

Is there something people should know about the scene there?

Halifax is sick for skating. Pro Skates is the local shop there, been around since 1986!

How is the weather like in comparison to Montreal? Even colder?

Actually, we got a harder winter in Montreal – basically, five to six months. It’s colder and snows more over here.

Do you mostly escape them Montreal winters?

Yeah, I’m trying to get back to Barcelona or maybe L.A. this winter.

As someone who skates a lot of ledges, what are your thoughts on MACBA?

The ledge is kinda overrated to me. It’s alright, just a bit round. The flat is good. 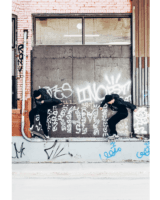 Another place in Montreal most skaters know is probably Peace Park. Do you have a favorite clip there?

And a clip you regret putting in one of your own video parts?

Are you filming for any projects right now?

So can we expect a new Dime full-length?

I’m pretty sure it’s going to be a full-length.

I’ve seen a bunch of curved ledge clips of you. What’s the most fun trick to do on those?

You are holding it down with the Canadians. Who is your favorite Canadian ledge skater?

Canadian maple is our favourite wood. The Canadians at Studio print beautiful graphics on it and know how to move it.