Most played song at the moment?

„Milkmen Stomp“ by The Dead Milkmen. You should give it a listen. [Tiago’s board crashes into Tristan] can’t handle the board man. [laughs]

Is there something you’re currently worrying about?

Would you rather have to push mongo or do rocket flips for the rest of your life?

If you were invisible for one day. What would you do?

A lot of people are nice man. Off the top of my head I can’t really remember. Yeah, a lot of beers this trip.

If you could meet anyone. Living or dead. Who would it be?

Shit man, that’s a though one. There is a lot of people I would like to meet and shit. It would be sick to meet David Bowie.

If you could be any fictional character. Who would it be?

You ever seen „Lilo & Stitch“? I would probably be Stitch. [laughing] Or I would be Donny, the crazy kid from „The Wild Thornberrys“. You know that TV Show? Or I would be down to be like Pikachu or some shit.

"I was eight years old, jumping off of fucking 30 foot drops into airbags and shit like that."

If you had to change your first name. What would you change it to?

[laughing] Yeah something fucked up. Probably be Herbert. I don’t know.

Yeah, there is not too many Herberts.

Fuck man. Chantel Jeffreys for sure man. She is hot as hell.

Who is she? A fitness model or something?

She just does the IG model and DJ shit. I don’t really know too much about her but she looks fine.

I’m sure she is a good person, too. Name one weird or hidden talent you have.

I don’t know I kinda suck at everything. [laughs] Oh you know I used to do fucking do stunt work when I was a little kid. I only did one commercial but I was eight years old, jumping off of fucking 30 foot drops into airbags and shit like that. I used to do that because my parents were both into that business. They were booked for stunt work and shit. Mostly my mom but yeah they tried to get me into it but I was like „fuck that… I’m tryna skate“.

Probably be able to do a loop or like fucking hit the mega ramp or some shit. It could be any trick as long as I can get it over that I would be fucking hyped.

If you were reincarnated as an animal what would you want to be?

What would you want to be as a child?

Kinda just wanted to be a skater. As soon as I started skating that was it. I kinda was into baseball and shit when I was hella little but I got over that too. Skating just stuck.

Who is the most famous person you have the number on your phone?

Probably soggy money from a kid at a signing. Like a really soggy Peso. I think we were in Mexico.

How often do you clean your ears?

[laughs] I don’t know like every couple of days.

Dude I’ll brake my phone right now. I don’t care. But I can’t.

You don’t want to live with the internet but you have to?

Someone you trust with everything?

What was the best day in your life?

This one time we were in Costa Rica and we fucking hiked through this jungle for four hours and then we ended up on this fucking perfect fucking beach with black sand and then we ended upon going on a boat ride to get back. And we were in these pretty much plastic fishing boats going against all these fucking huge ass waves. It was crazy but so sick. Yeah man.

A school subject you were good in?

Science. I was never really good at math or any of that shit but I was pretty good with science and history.

Who is the funniest person you know?

Shout out to Matt V. He is the homie from back home. A lot of the kids have probably seen him in my Instagram story. [laugh]

What is the first thing that comes to mind when you think of last summer?

I had this fucked up shit on my foot. Like all summer that was keeping me from skating. It was horrible.

Where have you been last Christmas?

I think I was at home.

"The Outsiders". I read it in school. I don’t really read a lot. [laughs]

Where do you see yourself in ten years?

Hopefully still skating man. I don’t know. Hopefully I live in a house with a pool in ten years.

A pool would be nice. 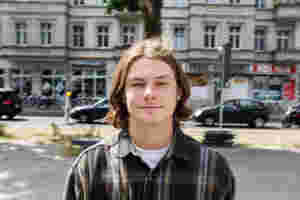 This kids are hot right now! We talked with Tyshawn Jones & Nakel Smith about music, style and their company.