We called the call center in Barcelona. And lo and behold, we ran into the "Horse Crew". Our contacts were Robert Born and Klavs Laveniks. 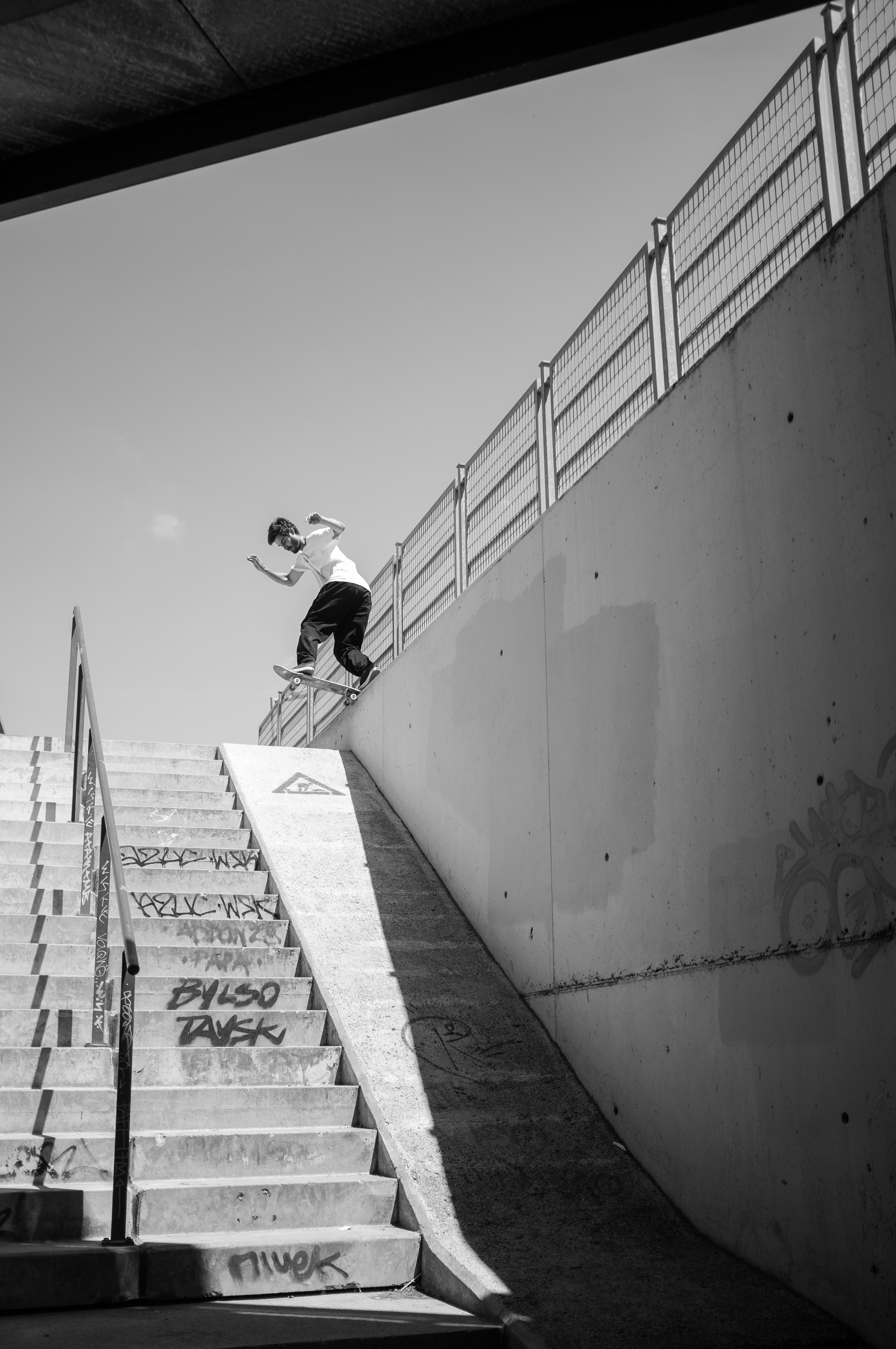 I met you now in Barcelona and I have not escaped your fable for horses of course. In addition, the video is called "like a horse". What is that all about?

Robert: When I came to Barcelona in September '17, I met Bart @jungenstach while skating and he said I skate "like a horse". After the session we had a kebab, he said I eat "like a horse". Later with some San Miguels at the Macba I drank "like a horse". It just happened that we made that our motto and instead of calling each other "My G", we call each other "my horse".

And that's how the "Horse Crew" was created. What does the crew have planned for the near future?

Robert: Be productive, go skating a lot and connect better. Apart from that, we are currently working on a small brand, but I don't want to say more than "Slide and Grind like a horse".

We are all excited about that. Do you all live in Barcelona and work in the call center?

Robert: Actually we all live in Barcelona. However, there are a few skaters from London, Berlin and Riga in the video who visited and went on a mission with Klavs. The majority of us are currently working in our home office, though not necessarily in customer support. We also have a graphic designer, teacher and content moderator among us.

Makes sense, as you can see from the funny intro graphic in the video. What is a day like for the Horse Crew in Barcelona?

Robert: First we work, then after work we meet at one of the hotspots and then we see where we want to go. On weekends or days off we meet early and go on mission. Those who are on Baja, like Wanja Bach at the moment, are lucky enough to be able to go on mission during the week.

Where are the so-called hotspots of the Horse Crew in Barcelona?

Robert: Everywhere, actually. During the week we are mostly at Born Plaza, W Hotel, WTC, Parallel, Uni and occasionally at Macba. Since Corona, however, the Macba is usually a bust, because there are too many people hanging around and the police kick you out. 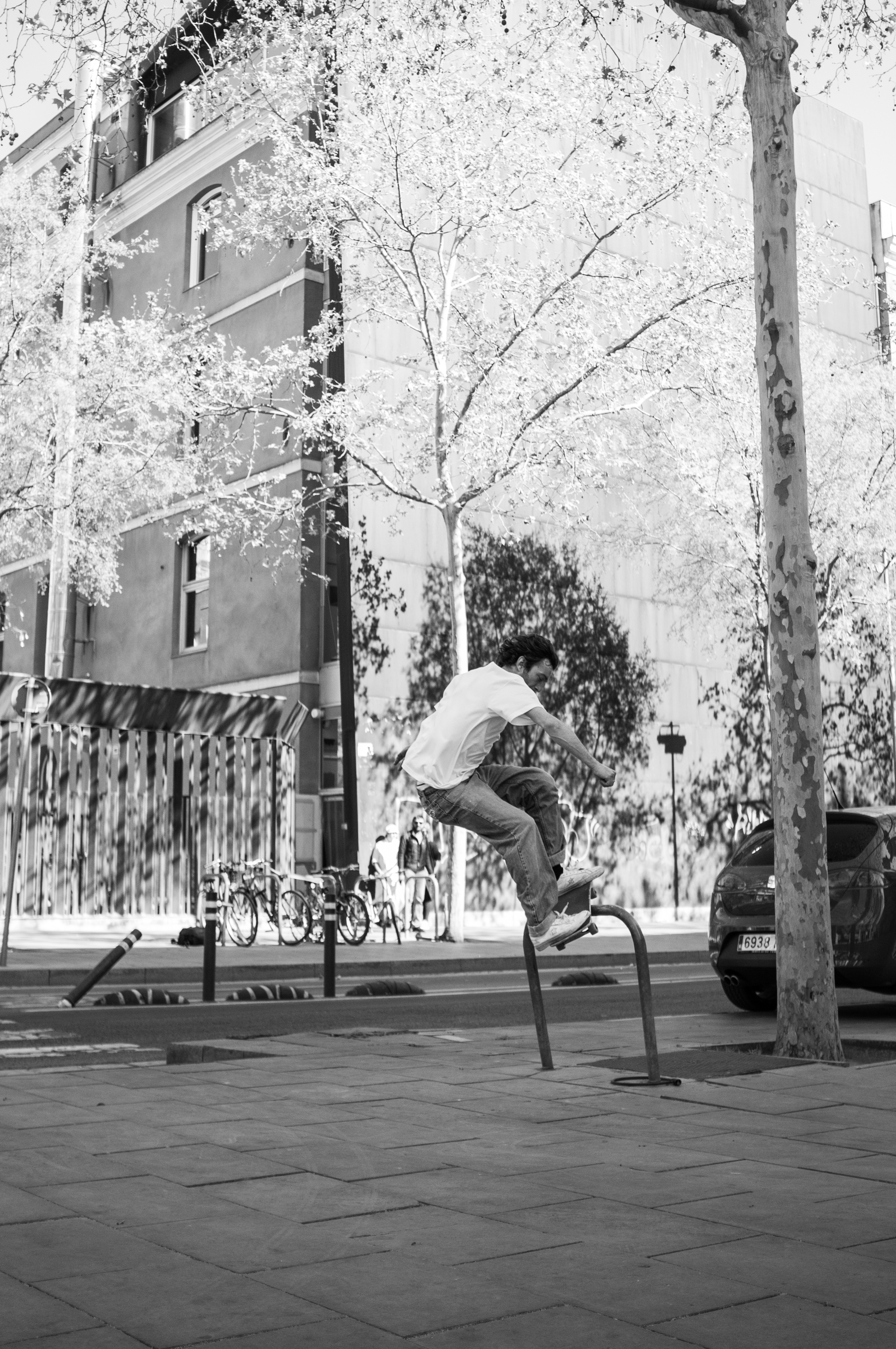 What is the most intense story you have ever experienced as a crew?

Robert: In October last year we were once a bit further away from the city than the Corona rules allowed. The spot had a clear sign that skating was prohibited there and was in the middle of an apartment block. Two homies must have skated 1-2 hours and stacked clips. When we have already packed up two police cars came, they have penned us and then controlled. There were eight of us, all without masks, outside the permitted area, at a spot where you are obviously not allowed to skate. Not everyone had a passport with them, which made everything even more difficult. Each of us was threatened with a fine of min. 1500€. Andrez, a native Panamanian with excellent negotiation skills, explained to the policemen in a reasonable way that we had no bad intentions. They let us go and we went straight back to the center, skated a little flat at the Macba and toasted to the day.

What are the weirdest things that have ever happened to you or your homies in the call center?

Klavs: When you work in website hosting support, you get some weird calls. There was one that was totally weird. I had a stripper/escort lady on the phone because your website was down. I checked a bit to see what the problem was and suddenly I noticed that she was talking to someone. I didn't think anything of it and suddenly realized that she was having a live webcam chat with a guy. I was then kind of a part of that chat because everyone could hear me trying to fix her website.

That sounds like a pretty fun day at work though. Is it possible to make a good living from the call center job in Barcelona (would you recommend that?)

Robert: Definitely. Since German and English are foreign languages here, it gives us a language bonus if we are hired for the appropriate market. Over time you gain experience and also qualify for other jobs with better conditions.

Have you ever had anything to do with horses yourself?

Robert: No, I have never ridden a horse either. I started skating with a buddy whose mother was a dressage rider. She was pretty famous and even met the Queen of England once, but otherwise I had nothing to do with horses.

If you try to find similarities, what do horses have in common with skating?

Robert: Horses don't stop, they keep going. When you skate "like a horse" you don't just stop, you keep going until you've done your trick. It's also a matter of attitude. You find a way to the goal, a hurdle is no problem for a horse.

The video is not 100% up to date. It was lying around on your hard drive for some time. What were the reasons for that?

Klavs: Yes, the video came out a year late. We had originally organized everything for the premiere and party last year in April. Three days after we had the location, the full lockdown started here in Spain. This put everything on hold because no one knew how serious the situation was and how long it would last, so we decided to wait. To finish the whole edit was not that easy, the lockdown made it very hard for us. 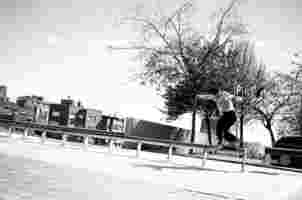 Homeboy took the boys to Barcelona for a couple weeks!

Erik Müller recently was in Barcelona for a month and not only skated there but also brought back this edit with friends.