Near Fisherman’s Wharf on the northern coast of San Francisco, an area filled with tourists and city tour double-decker busses, you can find Newell Street hidden like a small pirate’s cove. It’s quiet in the little dead-end street. Initially, we just wanted to meet there and then go on a mission with Daan Van Der Linden. But after a short trip to the bar, it was decided that it would be much more natural and relaxed to spend the afternoon with beer at the slappy curb in front of the house instead of visiting some huge spots. Six Newell is one of those legendary skate houses that could fill entire books with stories if their walls were just able to communicate. Although it was originally constructed as a duplex house, a sheer invasion of skateboarders happened in the mid-nineties. The rest is history – partly told by Frank Gerwer and DLX team manager John Alden.

Who has lived here in this crib?

John Alden: It was originally a crew from Michigan around ’94, some of Joe Brook’s friends actually. And then Frank came from New York, lived at a different house first then moved to Newell. But over the years, there has been a ridiculous amount of skaters that have lived here or stayed for extended periods of time. The list is fucking retardo.

Frank Gerwer: It’s pretty much like… everybody. At one point, there were 15 people living here. Skaters sleeping in the hallway and the living room. And I had a room, so I had to walk over all my friends to go to work. It was so depressing. It sucked. But that was anywhere from JR Neves to Pete Eldridge, bunch of dudes from Arizona, and then came Dustin Dollin, Nate Jones, Matt Milligan, Gabe Morford, Peter Ramondetta, Elissa [Steamer]. It’s always been full of skaters, but the original crew was Steve Franston, Julie Hickey, Mark Dempster, Eroll Dempster, and John Klein.

J: When the skate house was just the bottom floor, another family lived upstairs. That family moved out and the landlord asked us if we knew anyone looking for a place. So Elissa moved from L.A., her good friend Dan Rojas moved from Florida, Nate moved upstairs, LJ was on the couch downstairs, so he got a bedroom up there, James Nicol took the couch. So they got four bedrooms upstairs and we have three downstairs and it turned into this big fucking house. Before, it was everybody sleeping on the floor or on the couch and then we got like four extra rooms in the same duplex. That was probably 2003.

F: And then we went completely nuts. We had the whole basement as a band room, we made the video. Fuck, it was nuts. 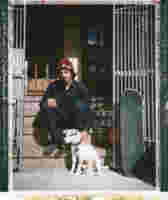 How many people are living here right now?

J: It’s just me and my family and we have a roommate, James Nickles. And my friend Willy  still lives upstairs. There’s a whole group of skate buddies who live here when they come from out of town. Anybody that comes through. We got the basement set up or they crash on the couch.

How long did you live there Frank?

F: I moved in at the beginning ’96 and moved out in 2004 or around 2005. Sorry, you gotta realize that we were fucking drunk pretty much the whole time we were here.

"It was just weeks and weeks of madness"

I guess there were some legendary parties going down.

F: It was just weeks and weeks of madness. Hard to explain.

J: It just has been the place for a lot of skaters to go to for a long time. Almost everybody on DLX has stayed here or been here at one point.

F: Kareem Campbell was here. Mike V was here. Even if they didn’t stay, they were here at one point. The whole Element team was here. It was weird. Kareem Campbell was in the house, Jonas Wray. There were so many dumb party nights. There was this stupid jumping-through-the-window thing that we used to do all the time.

Jumping through the window?

J: Yeah, the kitchen goes into the living room and the kitchen is like an addition, so the window is still there. Whatever, it’s just stupid drunk shit. There’s been a lot of good times and a lot of special fucking times with friends and skateboarding. People kinda having a little home. It’s a different vibe now. All of us aren’t in our 20s anymore.

J: We have a basement and I got some really nice cots, a couch, and kind of a room set up down there. That’s a newer thing, everyone just used to stay in the house, but now I got a kid and so on.

So every time Daan comes to visit the US, he stays here?

J: Yeah, he stays here. A lot of the riders still stay here. It’s always been like a DLX house. Evan stays when he comes to town, GT, Ishod’s done some time. We taught him how to do laundry. P-Stone would always stay here, him and I started drinking one night and ended up putting a new kitchen floor in. It’s been, like, a halfway house for a lot of people too. Skaters in between places or they just broke up with their girlfriends, so they come over here. Van Wastell was sleeping on the couch for a long time wanting to get a room. A young Brad Cromer and Jake Donnelly lived here for months. Julien lived here for over a year. So many skaters…

It’s crazy to think about how many pro skaters walked up these stairs.

J: It’s pretty insane. Some funny experiences. Heavy nights with Clyde Singleton, Rob Welsh. Slash, like Brian Hansen, came down here right before he got on Deathwish and all that shit. We met him down south and he has never been to the city and was all fired up on bombing a hill. Ernie Torres was staying here at that time too and just started heckling him. He said that he bets that he won’t bomb Taylor Street, which is the insane hill Frank bombed in the Antihero video after he tailslid the fence at the top. It was at night, light wasn’t that good, and the kid has just gotten here and has never bombed a hill in this city. And Ernie was just antagonizing him and daring him to do it. And I was like, “Don’t do it, you’re gonna die.” So a bit of money got put on the table, I think it was like 350 bucks between everybody. I was like, “Fuck this, the kid’s fucking gonna get smoked. Don’t do it to him.” We were at the bar and, sure enough, he takes a shot and starts walking up the hill. Dude gets at the top and I was at Union Street like two hills down and he fully caught air out of the flat of that hill and landed into that third hill right after Union Street and just fucking wobbled so hard and held on and took it to the bottom. I couldn’t fucking believe it. But we didn’t fucking have cellphones back then, so there’s no footage of it unfortunately. That was jacked. To me, that’s still one of the heaviest hills in the city.

The alley has been renovated five years ago, right?

J: It used to be rough as shit forever.

But you already used to skate it back then?

J: Yeah, but it was more of a challenge. If you landed a flip trick in the alley, you’d be stoked because it was so fucking rough.

F: It’s terrible. We would go up the curb, do a stall trick on the step, and then fakie manual or something off the curb. That’s really the only way we skated it. The curb was too gnarly back then.

But it has always been a meeting point?

J: For sure. We used to skate flatground on Lombard Street. That library didn’t use to be there. The city and its neighborhoods changed a lot though. 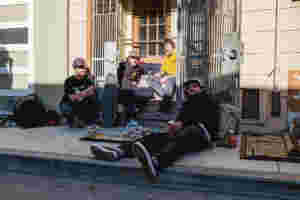 What’s the landlord saying? Is he cool with skaters staying here all the time?

J: We pay our rent. We’re human beings like anybody else and we have always been cool to him. It’s not as much of a party skate house anymore as it is just a mellow place to crash. It’s a shame that we never figured out how to buy it before the prices in the city went insane. It’s still good.

Did the rent stay the same for you guys ever since you moved here?

F: It always goes up two percent every two years, but you’ll never find a place like this again. When I moved in here, my rent was 300 dollars.

J: I don’t want anybody to know how much I’m paying. [laughs]

Who can't handle gnarly slams should think twice before watching the newest masterpiece by Nike SB.