Samarria Brevard – Get those enders

The photos in this interview are from last summer when Samarria visited Berlin with the enjoi crew. You can tell she’s up for bigger spots, but you already saw that when she first entered the global skate world’s perception during 2016’s King of the Road. Handrails, hubbas, gaps – all of these are included in her CV. She also goes into contests with full power, which is why she almost broke her back in Street League; it sounds just as rough as the slam looked. At the time of this interview, however, she’s chilling at home in Rancho Cucamonga, 60 km east of Los Angeles. The 26-year-old still has to walk her dog, but first comes the interview for breakfast. Good morning, Samarria.

It’s nine a.m. at your place, but I heard that you’re a morning person anyway and you get up at six.

I try to. When I was young, I would just wake up early naturally. These days, it just depends on what time I go to bed.

I got in contact with your manager Yulin [Olliver] while preparing for this interview and she helped setting up this call. Is it more necessary for female skaters to have managers to get what they deserve?

I think it just depends on what you know. I don’t think it’s necessarily a female thing. My manager helps me with reading contracts and understanding things. If you know enough to do the business side of things by yourself, you’ll have more power to you. It’s not a necessity if you know what you’re doing.

You moved out of your mum’s house into your own flat, so it already is paying off to have her. 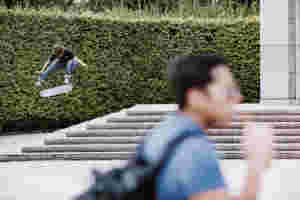 You also switched from Etnies to New Balance. How did this happen?

It was just my time to go. There are no hard feelings or anything. I just had to go to find another outlet that gives me more opportunities, especially with travelling.

Are you working on something with them?

There are some projects that I’ll try to start with them but first things first. I gotta get my Panda Patrol part for enjoi out of the way. I hope it comes out sometime around summertime.

So are you going for enders now or do you just need some filler lines?

I gotta get the enders. [laughs]

You have a really good tre flip. What’s your secret for this trick?

There is a vloger named L-Pav in Germany and his claim is: “A day without a tre flip is a lost day.”

"My grandma is pretty much a German lady, that’s how I got a little bit of German in me."

My grandma is pretty much a German lady, that’s how I got a little bit of German in me. Her grandparents came from Germany.

Do you feel a connection to Germany?

I definitely wanted to come and see Germany and see what it looks like. I didn’t know much about it, but I learned a lot when I got there. Mark [Nickels] told me a lot of different stuff. We went to a lot of different things. He is a pretty convincing tour guide.

Talking about origin, I looked up that Samaria, with one r, is the biblical name of a town in the region of the ancient land of Israel. What is your connection to that?

Honestly, I don’t even know that. My mum and dad just agreed on that. I don’t really know how they came up with it.

[laughs] No, I never got the curious bug about it.

You started skateboarding because of your brother. Does he still skate?

Yeah, it was my brother and a really good friend, and they were skating and I was playing basketball. They were having so much fun so I said, “Let me try.” I instantly loved it and we all still skate.

What would you say were some important turning points in your career?

Definitely meeting the enjoi dudes was a big step but also being a part of my old team, Hoopla, which was created by my homie Mimi [Knoop]. That was a big influence keeping up the hype and progressing myself. Hoopla and enjoi definitely were two very important parts that helped me grow to the skater I’m now.

You like to skate big spots. What skaters or videos did you like when you were younger?

Honestly, when I was young, I was just watching local videos or my homies at the skatepark. They inspired me to be a little bit of a hucker. I didn't watch too many skate videos in the beginning, but I watch more skate videos now.

You also skate ledges. Mark told me that you liked the Bänke spot a lot and that you said that you would love to have that spot at home.

For sure, the benches! My ledge game would definitely look different if I had those right by my house. It was good. Interesting people around there.

Did you have some interesting encounters in Berlin?

We were eating at a spot and some dude came and sat with us and then he farted while we were eating our food. We decided to get up and leave. [laughs]

Wise decision. I found a ldocumentary video about you online and it shows your room in there with a lot of to-do lists on the wall. One said: shower, brush teeth, and wash face. Do you really need to remind yourself about that?

I was just really specific with it. The first time I saw somebody with a to-do list was Chris Chann and I thought that’s kinda cool and went after that.

I put the to-do lists up so I can actually get stuff done. I just want to see my morning routine and everything… just things I gotta do.

Do you also have trick lists?

Yeah, I have one.

Another list said: be vegan and own a vegan restaurant.

I’m pretty much vegan. Here and there I eat cheese, but besides that, I’m vegan. Or I should say plant-based.

What is the difference?

Veganism is everything, your shoes, your clothes, there is no animal product used anywhere, but I do wear suede. I just do a plant-based diet.

If you get a pro shoe, you can make it vegan.

And how is it going with the plan for the vegan restaurant?

It’s more like, hopefully I can get it in the next five to ten years cause I got so much going on right now that I don’t have time to put all my energy into it. I’m just curating recipes.

What are your favorites?

Right now, my favorite thing is to make vegan burritos because they’re so easy, but I’ve been trying a lot with tofu, trying to make tofu nuggets.

"I have GarageBand and if I find a beat, I record on it. I write a lot. Whatever I come up with, I figure out the flow and lay it down."

You also had this to-do on your wall saying: bring home the gold. What does that mean to you and did something change for you since the Olympics became a thing?

When I wrote that, I just wanted at least one gold anything. It wasn’t specifically the Olympics. It was more like if I could win a Street League or something, to bring home a gold medal within this contest circus. However, I don’t know if I will be doing contests so much after the Olympics. I feel like I’m probably gonna be focusing on producing street parts and doing more stuff outside of contests after this summer.

How’s the qualification for the Olympics going?

I’m not even sure what place I’m in. From February till May, there are a lot of contests going on and a lot of opportunities to get points. April till May, I’ll be in Asia for a whole month and then I’ll go to London for Street League. The season is very hectic.

I heard that you stopped smoking weed to be able to compete. Is it worth it?

[laughs] That part was pretty easy. I like weed, but it wasn’t hectic to stop. It’s all chill.

All in all, you seem to live a pretty healthy lifestyle. Is it because you try to be the best you can on a board or do you just want to live healthily in general?

Pretty much, I just want to be healthy, it’s who I am and how I was brought up. My dad used to make me drink tomato juice and stuff. It’s more a natural thing.

Talking about health, is it true that you broke your back during Street League practice?

Yeah, that was gnarly. The next morning, it was so hard to get out of the bed. I couldn’t even move.

What injury did you have?

I don’t even know. I just know that I hurt my back. Pure impact. I didn’t really go to the doctor.

So after a few days it was all good again?

No, a couple months.

What?! It lasted a few months and you didn’t go to the doctor?

No. [laughs]I was just doing my own thing. I actually did go eventually to the doctors, but that was later and I found out I had some sciatic nerve damage, but we’re all good now.

I feel like I just had to take time. If I would’ve broken something, I would’ve gone to the hospital for sure.

I saw you rapping in some videos. Are you doing a lot of that when you’re not able to skate?

For sure! I have GarageBand and if I find a beat, I record on it. I write a lot. Whatever I come up with, I figure out the flow and lay it down.

Do you also produce your own beats?

Right now, I’m more of an MC, but I’m learning how to create beats, too.

Who are your favorite rappers?

Drake, Kendrick Lamar, I really like Logic, and The Underachievers are really tight.

You were part of the first Women’s Battle At The Berrics and you got 4th place. How was it?

It was a lot of fun. We’re all good friends. I wasn’t too nervous. It was just hanging out with the homies while a lot of people were watching us hang out. We played games of skate and that was pretty much it.

So you’re filming a video part, you’re doing the contest circus. Anything else coming up this year?

For right now, that’s pretty much the main things I got going on. I think in April I will not be home at all. We’ll see what happens with the rest of the year.

Last but not least, I have to ask about the 50-50 backside 180 out. Biemer told me it’s his favorite photo from last year. It looks so sick cause your feet are still in grind position while your upper body already has nearly completed the rotation.

You gotta have those shoulders ready. That spot was quick and the landing was kinda crazy, so I was trying to make sure that I was already fully turned when I did it. That’s why I was turning super early.

From now on A brief glance also comes as a print mag and they start it of right with a clip that comes with issue #53.