Actually we were supposed to meet Rowan Zorilla at the London House of Vans for a release event for his new shoe and collection, but then this virus came up and everything had to be cancelled. You don't have a pandemic on your notice when you promote a shoe. But now we called Rowan from a safe distance, which meant for him to get up early to make the time difference work. But even at eight in the morning you can talk to him about skydiving, jazz and the filming requirements for a Supreme video.

Are you getting up early in general or just for the interview?

Sometimes but right now there is not much to do with all the stuff going on.

The Euro release event for your shoe got canceled due to Corona.

The one in California was early enough but every other event has been canceled so far.

How many others were planned?

One in China, but that one was cancelled a long time ago. Then one in Korea, the one in London and even some smaller ones. There’s one at a skateshop in LA that got cancelled. Quite a few. I have maybe five trips cancelled so far.

Is it maybe even good to chill for a bit at home? Does it get too much with travelling sometimes?

It’s cool to be at home but all the trips seemed pretty cool. And it’s for the promotion of my shoe, so that’s stuff I wanted to do. It wasn’t like: I have to go here. 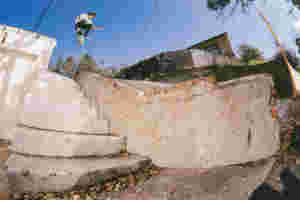 How did you come up with the design of the shoe and the collection?

I just wanted to make something that first of all skates well but also wanted to make sure that it looks like a Vans shoe. Something that if I saw it in a store I would want to get and want to skate. I remindes me of older shoes from when I was a kid that made me want Vans in the first place.

A lot of younger skateres nowadays are inspired by the 90s. Are you likeing this era as well?

Yeah for sure! 90s/2000s – pretty much all my favorite skaters were at their peek at that time.

Which skaters we talking about?

I was ten when "Baker 3" came out. Everyone in there. All the Toy Machine videos that came out at that time were good. The Zero videos. Even before that the very first Anti Hero videos. Those were all what I grew up watching.

How did it come together that the music for the shoe clip was specially produced?

Matt Sweeney has been a good friend of mine for a while and I asked him to do it and told him he could pick whoever he wanted to do it with and he picked Jon Theodor from Mars Volta. I don’t know how long it took them but the track came out amazing.

Do you play an instrument yourself?

No, not really. I’m not musically talented whatsoever but I have a really broad taste. I don’t only like one type of music.

Are you especially into Jazz, cause the London event was suppossed to have a Jazz band playing?

I do like Jazz but that was more the marketing team, they were saying my skating could be compared to Jazz.

What other music are you into at the moment?

I’ve been listening to a lot of reaggae music lately. Roots reagge or even newer stuff that is almost hip hop. 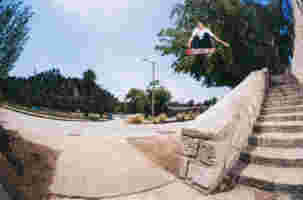 At the US weartest for your shoe you went skydiving. Is that something you’re into?

No, we just picked a skatepark for the weartest and it happens to be next to a small airport where they do skydiving where I actually have been once before with Figgy and Collin Provost. When we picked that skatepark Matt Bennett was kinda just joking that we should go skydiving too and then all of us found it a sick idea. First I thought it wouldn’t actually be possible but then the guys that planned the party told me that we can do it, so I was like: “Yeah, lets do it!”

How is it to jump out of a plane?

It’s pretty crazy. The first time I did it the guy just jumped straight out. Free fall and after he pulled the chute we just floated down. But this time the instructor I was attached to did five flips and after he pulled the chute he was spiralling down and doing all these tricks… I don’t know, the first time was more enjoyable cause I could looked around and took the views but the second time I couldn’t really relax till I was on the ground, also knowing that there’s so many people at the skatepark and my family was there.

What other stuff do you do besides skateboarding and jumping out of planes?

I’ve been really into surfing lately. I grew up doing it and when I was around 13 I stopped until I turned 22. So I’ve been doing it for the last three years and I’m getting back into it. It’s fun and I didn’t have to learn all over again. I just had to sharpen the tools.

Are you living near the beach then?

No, I live in LA on the east side. It’s kind of a hassle to get to the beach but it’s allright, I don’t mind the drive. It’s either 40 minutes to the beach here or I drive to Malibu but if I do that I just spend the whole day out there. My parents still live in Vista and I have a lot of friends in Oceanside and I visit them a lot and when I do I surf like five times in a week, which is great.

"While Supreme has to have their footage look a certain way, Baker doesn’t really care. They just want good footage"

You mentioned before that people say your skating is really spontanious and they compare it to Jazz. Does it really all just happen or do you have an idea of what trick to film?

If I’m not on a deadline I kind of just go out and let the skating happen naturally. Maybe you find something new to do, maybe not, but towards the end of filming for a video I definitely have tricks that I want to get done before the video comes out. Or if I’ve tried a trick before and didn’t get it, I want to go back. So a lot of times there’s stuff that is pretty planned out and calculated. But if I’m at a skatepark or don’t have anything in mind that day I just let it happen the way it’s supposed to.

How do you come up with new tricks?

Good question. Just the same as since you started skating. When you see a different opportunity at a different spot or for some reason a trick you’ve never done makes more sense somewhere else you just give it a try and if it works, it works and if it doesn’t, you move on.

Did skateboarding change for you from where you started till now?

Maybe all the things surrounding skating changed but the actual act of it still feels the same as when I was a kid. But then there’s different stuff you have to do, interviews and going on demo trips or signings. That’s all different and that’s all kinda strange to me but if I’m just skating a park with my friends I still get the same feeling I got before.

When filming for Supreme you can only film with a few filmers. If you’re on a trip with Bill [Strobeck] you know you’re filming for this thing. Or if Bill or Johnny [Wilson] are in LA then you know it’s time to film for that. For Baker you can film with whoever you want. While Supreme has to have their footage look a certain way, Baker doesn’t really care. They just want good footage. It’s more on you to go out with whoever you want to film with or go on trips and keep the footage. But I came straight out of filming for the Supreme video into filming for Baker so I only had about a year for the part. So I had to buckle down and focus more. For Supreme it was more like: “Oh Johnny is in town. Let’s go out and skate.“

How does the footage have to look like for a Supreme video?

I mean every filmer has his certain settings, how he sets the colors, the grain… Bill also has a pretty distinct style of filming. Very zoomed in and stuff. He wants to have the whole video look like that. So the kids that he trusts to film have proofed that they can do that well. Basically if one of these kids can film a trick and people think it’s Bill, that’s what he wants. I’m sure if someone else filmed the clip and Bill likes the way it’s filmed he’ll use it but for the most part it’s better to go out with Bill or Johnny or Logan [Lara]. The people you know he will accept the footage from. If Bill doesn’t like the way it’s filmed he will not use the clip, even if it’s a really good clip. Cause he wants the whole thing to look aesthetically the same.

Did it happen to you that you lost some good clips because of that?

If I filmed with someone else during this time period I didn’t even bother to send it to him. I just saved it for something else.

Do you watch a lot of old skatevideos?

Definitely more than I watch new skatevideos. I don’t really keep up with what’s going on now as I did when I was younger. When I was a kid, the fact that we had Youtube and could watch any era of skating was pretty awesome. If I only grew up watching what was going on when I was a kid, the pros at that time, I would’ve ended up skating differently.

Which skating or videopart influenced you the most in the way you skate?

Probably Mark Gonzales in “Video Days”, I watched that a million times as a kid. I try to skate everything, I try to skate transition, vert ramps when there’s a chance. There’s a different videopart that inspires any different kind of skating.

If you have read the headline, you can skip the text here. Shit, too late.

They say the eye of the hurricane is the calmest place. That's not true of the Asian Vans team. They really come out swinging in the storm.

Rowan, Dustin, Tyson & Kader aren't the only thing that connects Vans with Baker. The two iconic brands now also have a collar together.