Last spot that blew your mind?

I don’t really remember which spot it was but it was in Greece for sure. Like when we did this trip with Vans. There were so many spots in the same area that all were gnarly.

Last trick you saw that blew your mind?

I don’t even know. I think Doobies noseblunt into the downhill in Greece was pretty hectic. The gap over to nosemanual at the blue ledge. 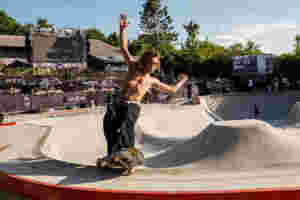 Frontside Feeble around the corner

I would say backlip sugarcane on transition, but I’m not sure.

How do you learn tricks? Do you think about a trick and then you do it or do they just happen?

Sometimes I think about it and I try. Sometimes it works, sometimes not. Or I see someone and think: “Wow, that looks really sick. I wanna do this.” I can feel the adrenaline for them. I wanna get that feeling.

Backside 360 drop into this famous brown bank in Lyon.

It was Battlefield 5. I was injured back home so I played videogames a lot. Playing war and shit. I also play “Skate 3”, “GTA”. I actually love this game “Red Dead Redemption”.

A few days ago. We went to some bar and had some beers. Shit happened…

Last time you were together with all the Antiz guys?

I think the last trip I did was like a year ago. I think we went to this filmfestival in Milan.

"I could just get out of the house, bomb the hill and 30 seconds later I was at the office."

That was when I met you as well. We stayed in the same apartment.

Yeah exactly. I think that was the last time I traveled with Juju [Julien Bachlier] and them. I know they went somewhere else after that but I wasn’t in it.

Do you see Juju a lot in Lyon.

Yeah, I used to live in the same street as the office and the office was down the hill so I could just get out of the house, bomb the hill and 30 seconds later I was at the office. That was pretty sick but now I’m moving to Biarritz.

Why are you going there? Because of surfing?

Yeah, I wanna learn how to surf and I was over Lyon. I had to renew my life. I lived all my life there so I was like: „I had to get something new.“

A few months ago. They’re rebuilding it. It’s closed since a few month. It’s been three month already I think. They just started to do the new ground I heard. I think it’s gonna be pretty sick.

Last album you listened to?

I think it was Johnny Cash. I don’t know the album but “Folsom Prison Blues”. I’m really into that. I like country music a lot and rock music for sure.

I actually was in Biarritz two weeks ago.

I would say yesterday night.

I think that was some stupid shit probably. Last video I took was Jordan Thackeray trying to get in the Uber.

Last time you were swimming?

Two weeks ago in Biarritz.

We talked to Stuart Maclure and Louis Woodhead from LLSB about how they succeeded with their campaign.

Besides skateboarding, Louis Taubert discovered a love for surfing and prefers to spend a chill day at the Danish coastline. We accompanied him.