#pleasecharge gallery – Skateboard filming in times of the hashtag

You’ve already seen the #pleasecharge video. Ben Chadourne filmed it with the Cons euro team in only a few month in different european cities. When the guys went to Berlin, we sent Henne there to take some pics and grabbed Ben for an interview about skateboard filming in times of the hashtag. Aaron Herrington – 50-50 It seems reasonable that an interview about the topic Instagram videos takes place via Skype instead of doing it personally or via phone. But you shouldn’t interpret something ideological in this fact. It’s just comfortable and for free to talk over boarders with that. It’s simply a new way to communicate which, same as Instagram, reduces distances. „You’re able to connect easily with people and you can inform yourself about what you really want. I like to use my Instagram to document what I do and people can follow me and see that. It delivers a kind of identity of myself by showing what I’ve done and with who I’m hanging with.”, explains Ben and adds, „It’s a gallery to exhibit yourself. It’s a new part of ourselves. You have your real life and your virtual one. Harry Lintell – Frontside Bluntslide It’s kind of strange but it simplifies to get in touch with people. Everything gets faster and faster.“ Despite all directness is the shown reality on Instagram, not only because of the filters, a hyperreality which through selection and contraction beautifies your own identity or your own existence. Ben knows that but he doesn’t think about it too much. He is a child of one’s time and handles the offered possibilities naturally. It wasn’t the marketing department of Converse who came up with the hashtag to the video, it were the skaters themselves. „In the beginning we had no name for the video. On the second trip my friend Paul (Grund) used the battery warning saying „please charge it“ of his boombox for one of his Instagram videos. I really liked it and reused it for my Instagram and then we thought it would be a really good name for the video. With the hashtag we can also document the filming process.“ Remy Taveira – Backside Lipslide Needless to say that this was also very well received besides the peer group. „It wasn’t really the goal to do a campaign with Instagram. We made it because everybody in the skateboarding world uses Instagram, so it’s just a good way to express ourselves. That’s it. I just started to use #pleasecharge and the people from Converse were really stoked about it, so we started to communicate on Instagram with this and made stickers and all that. That’s just how things go nowadays. We are living in a time where we live through our smartphones. The communication changes, there are less and less paper magazines and everything shifts on the screens. Big and small screens, laptop, smartphone, iPad and everything. It really came like that, we didn’t plan an Instagram campaign but now I think that more people are waiting for the video than if we didn’t do that.“ In the past you used to wait patiently till a new full length video came out and didn’t hear anything from your favourite pro for years. Occasionally you would see some tricks in magazines but that was it till the next video part. At some point came the 411 video magazine and provided monthly the latest footage. Even then it didn’t find everyones approval. And nowadays? Danny Sommerfeld – Backside Tailslide Brandon Biebel recently acquires his pertinence only through Instagram, Guy Mariano and Lucas Puig got their Instagram game so on lock that they basically post every day tricks which also could be used as enders in any part. And even Pops handles it to give a sign of life throughout his phone. Ben takes this inflationary output relaxed. „Well, they got like thousands of followers and that’s their way to communicate with them. It’s different nowadays than before. Full length and Insta are two pair of shoes, but it’s good for skateboarders because they really can express themselves.’“ It seems to be a generational question. Nowadays you’re used to be always living around and you know who does what with who – no matter if it’s your own social clique or some pros, you’ve never met before. Thereby comes the question up if the magic, the so to say sacred, gets lost when you already know which skater did something on which spot before the release of the actual video. Even arthouse-porn-audience postulate always that erotic is what you can’t see. „Yeah sure, you have to be careful that you don’t show too much and I think we gave a lot already. Sometimes we thought afterwards that we shouldn’t have posted this because of course it is killing the magic. But you also have to play with it. It’s the way how you communicate with it. Sometimes, not really often but sometimes, I have to tell the skaters that they shouldn’t load some certain things up on Instagram because it’s not worth it and it’s really better to keep it for the real video and for the final piece. With Instagram things can get obsolete real fast.“ Aaron Herrington – Wallride Backside Grab Out Posted, seen and scrolled down in the feed – that’s the procedure of the digital digestive process which catalyzes the metabolism of the pictures in such an intense way that your hunger for the next bite comes back shortly after the visual ingestion. A high risk of heartburn. „Maybe we’re gonna get bored soon by all those short clips, so people gonna love to see full length videos. Its always the same with those clips on Instagram so you could get bored with the time. The #pleasecharge clips were well received by the most but I’m sure that they are really keen on seeing the real full length. It’s two different things: On the one hand what everybody can express, show and see and on the other hand what real videographer can do.“ The reduction of an access threshold, the simplified cutting technique and camera equipment became cheaper by and by, obviously merged in a smartphone, is a good thing. The entry for kids is made easier and crews all around the world please us suddenly with clips we wouldn’t had seen otherwise. Individuals who didn’t have a chance to direct the attention to them, in a world ruled by companies and teams, are standing all of sudden in the limelight. But what teases a filmer to swap his HD camera into a phone and limit himself into a square format with a preset time of 15 seconds? Could such a muzzle benefit the creativity, like poetic rhyme scheme, at the end? „I think that you get more creative through the fact that it is only 15 seconds because you have to give the information in this short time. That’s a challenge. Sometimes I’m zooming in or zooming out, adding colour corrections and I’m really playing with it. I try to keep my editing game on point and I’m having fun. I try to give as much information in the 15 seconds limit but I’m normally not really into quick cuts. The video is not gonna be like that. It’s gonna be more mellow but maybe at some parts like that.“ Harry Lintell – 50-50 So there is a clear separation between Full Length and Insta esthetically but how is it on the spot? What comes up on Insta and what comes in the video? „I always have my phone in my pocket so when something is happening I’m filming pretty much everything. And most of the time it is when the guys are warming up or maybe we find something funny. Using your phone is really fast and it’s not like taking the big camera. Besides that it’s also more legit sometimes with the iPhone what wouldn’t be worth to film with the big camera.“ You probably know it from family celebrations. Everybody is freely fooling around but when daddy brings out the SLR the whole family suddenly stands stiff with tormented glance in front of the camera. „It’s really impulsive and more spontaneous and you get things you wouldn’t see if you didn’t have an iPhone. But that’s the same in other things than skateboarding. On the network you can see really crazy things because its so spontaneous and using your phone is really easy. Everybody can film with their iPhone.“ If you think this idea of documentation via smartphone ahead, not just magazines and videos but also photographers and filmers would get redundant. The skaters could film themselves during the sessions and directly upload it to one of the already existing numerous smartphone formats. Maybe there will be a video which will only contains 15 seconds parts or everything gets even more direct and skateboarding will be provided via live stream from the spot. Maybe the next #pleasecharge hashtag will wander around through the new Periscope app. Ben is pretty open minded to everything: „It’s not about the pixels or Full HD. You can do a super dope video with an iPhone and you can also do a really shitty video with a RED camera, it’s just the way you use it. Just the way you film it and cut it.“ 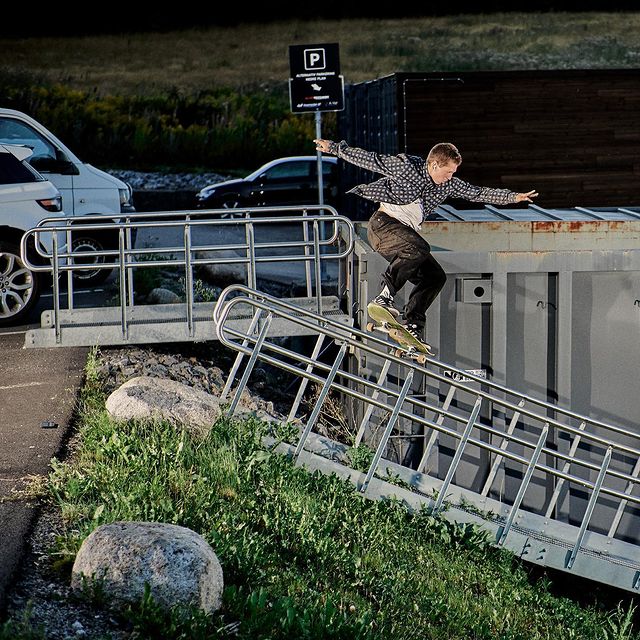 A documentary about Jahmal Williams

The Minuit collective is back with a new clip – entirely filmed in nightly Bordeaux.

Ben Chadourne on the other side of the lens.

Tyshawn Jones giving it another shot for SOTY.