The first time I met Nisse, in the times when real communication and attention spans still existed, we were both sixteen years old. Me, a socially dyslectic guy from a small town, where the only contact with skateboarding was through Rhino Ramps; and Nisse, a young prodigy from Stockholm, who’d been waiting for me for two hours because I had jumped off at the wrong train station. He said, “Hi, I’m Nisse” and I answered “Yeah, I know.” Yes, I did not know a lot about social codes back then.

It was my first shot at getting a job as a skateboard filmer, and I was supposed to film this short weekend clip of Nisse and asked him to roll down this hill. I explained that I was going to go in front of him, backwards, to film a cheesy artsy shot. I acted like I knew what I was doing, an act that didn’t last for long. Four seconds later, I smashed my head into a pole, and all of a sudden, I’m on the ground with a concussion. Bull’s-eye! I kind of saw how this could be a one-way ticket back to my small town, but decided to laugh it off, and continued filming Nisse for the whole day – although I was seeing two Nisses in the viewfinder. I’m very happy that I did that because we’re still filming and skating together 13 years later. Adult life comes with something very few people talk about: the everyday life, where you have to do pointless shit in order to be considered a citizen; shit that gets in the way of hanging out with your friends. However, when I get the time to hang out with Nisse, whether we’re out in the woods filming a sketch with a fake mustache or watching a best of Ali G compilation, life feels pretty good. I say “pretty good” because too much toxic positivity is more likely to be found in Disney movies than in actual reality. Anyway, people like Nisse make me laugh and procrastinate adult life as much as possible, which is exactly what you need when most people around you are trying to do the opposite. Skate-wise, I think you could say that Nisse is a project-based skater. He enjoys the whole thing: the skating, filming, editing, and all those Folköls in between. A sort of compass, where trying a trick is a process instead of a battle, and the spot plays as much of a role as the maneuver itself. 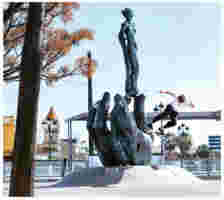 Let’s start this off with the standard questions: when did you start skating and what’s your zodiac sign?

Hmm, I think around the age of ten. I’m a fish.

Oh, you mean Pisces. According to a horoscope site, the “Pisceans are the zodiac’s fantastic dreamers and poets. Pisceans are frequently divided between wanting to accomplish something meaningful in the world and fleeing to the secure ports of their inner worlds.” I’m kind of imagining you sitting in your room not knowing if you’re going to play the guitar or throw yourself down some stairs. How are you doing?

I’m good. I’m back home in a snowy and cold Stockholm at the moment.

The winter is a wonderful and terrible miracle. I’ve tried to avoid it as much as possible since I saw the movie The Endless Summer. So you escaped Barcelona after eight long years, have you rehabilitated from those popcorn-stinking Nevermind nights?

I seriously don’t miss living there, but I don’t mind going there against my own will.

"I think the switch bs tail and a good switch flip would put me in a less awkward position than standing drunk in the karaoke bar, singing Céline Dion."

Somehow that city is like the one friend in the group whom no one really likes, but who keeps being around. What is your go-to feel-good movie in times of despair?

I always end up scrolling through trailers until I give up and end up doing other stuff. There are too many options nowadays with all these streaming sites.

Speaking of giving up, have you heard anything from Björn [Holmenäs, Sour boss] lately?

[laughing] Not really, but somehow I will go on this trip to the south of Spain with the Sour guys without hearing that much from him lately. I hope I see him there!

Last time I heard, he was playing pitch & putt and trying to order plane tickets in a very windy situation. Hope his blood pressure is alright. Anyways, since you’re in snowy Sweden: skateboarding/snowboarding, pros and cons?

If you could rebrand yourself, what type of style would you go for?

A and B. Switch hardflip some stairs wearing Timberlands and a leather jacket would be something. 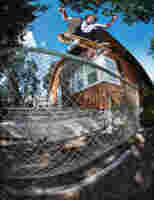 You’d definitely end up having a “Cult of Nisse” in your afterlife. If you reincarnated and were able to choose your birthplace, what country would you choose?

I think I would pick Sweden again, it’s a lovely place.

That’s why the dip is important.

Better triple dip that chip! What was your best-selling Euro pro graphic?

I think the Michael Jackson boards that never got released.

Yes, I saw the mock-up of it but never the actual board.

I think it was the most preordered board for Sour. All the boards arrived on a Monday, and on the Sunday night before, the documentary about Michael Jackson being a child molester was aired. The timing was insane. One of those moments that make Sour what it is. [laughing] Björn panicked and we had to make a print on top of the Michael print with the Instagram “Sensitive Content” thing on some of them. I think some of the original boards are saved somewhere.

Oh god, I can see Björn sweating his balls off at the office. What is your worst-selling graphic so far?

Probably the Michael Jackson boards as well cause they were never sold. 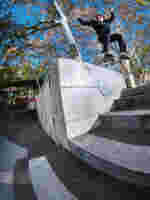 What would you do if the world canceled you and you got kicked from all your sponsors?

Study something or try to get a job. Or would I be canceled there too?

Sweden could probably sort out some stimulus check, so you could dedicate more time to the sofa. Last TV series you binge-watched?

Never heard of it. Do you read books?

It has happened but not that often. Feels like I need a long journey or something similar to read a book. Maybe I should travel more.

If you could manipulate time and go back to one trip from start to finish, what skate trip would you go on?

I’ve been on many good and fun trips but maybe I’d choose the Sour in Guatemala trip. That was amazing.

What was up with that trip, how did you end up there?

Paulo [Franco] and Ches [Hernandez] from Guatemala went to Barcelona and visited the Sour office and they talked to Björn about the idea that we should come there and skate. At the time, I had only been outside of Europe once when we went to China, so it was cool to see Central America. 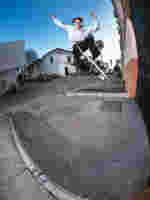 How was skating around there?

People were nice to us and we did a perfect mix of skating and touristing. Such a contrast from home, seeing police with loaded shotguns, street dogs, and some really sketchy areas. Some crazy things happened too.

I wish I could’ve gone on that one, but at the same time, I heard that half the team had near-death experiences.

Yeah, Barney [Page] almost broke his neck when he dove into the one-meter deep pool, Josef [Scott Jatta] cut of his finger when he was opening a package of meat when we had a BBQ, and some of the guys almost died when Jack [Thompson] couldn’t find the break in the van while it went backwards down a hill with a drop on the side of the road. But everyone survived, luckily!

That could’ve been the real sour solution of the Sour Solution. Would you rather have a singing voice or a decent bag of switch tricks?

I don’t think I would dare to sing in front of people anyway, so a proper switch bag would come in handy.

But just imagine grabbing the mic at the karaoke bar and blasting the Titanic song pitch perfect, would you really swap that for a switch backside tail?

I think the switch bs tail and a good switch flip would put me in a less awkward position than standing drunk in the karaoke bar, singing Céline Dion.

I see, the Law of Jante, the Scandinavian handicap that runs through our veins. Speaking of Jante, is Fritte [Söderström] working on any new projects?

Yeah, the Law of Jante is deep down in our souls. Yes! We’re actually going to Sicily in March. Fritte is a legend, on and off the booze! I love that man.

If you got a sensual foot massage from anyone on the team, hypothetically, who would it be?

Definitely from Josef “the Sultan” Scott Jatta. It’s time for him to serve. [laughing] He’s right here next to me playing PS4 and asking people to go buy him some stuff at the supermarket. He’s the best.

If you had to become one thing, what would it be?

A and B would be an interesting combination: a fruit-eating sect member.

Wow, picking two of the options is like a slow suicide. Imagine how mentally unstable and thin you would be. You would end up looking like Christian Bale in The Machinist.

That would be a part of the experiment. At least Christian Bale survived (barely).

Well, thanks for your answers. I got to figure out how to log VX tapes on a modern MacBook, see you on Monday.

Thank you, Lomar. See you soon.

There is no catchy teaser needed here, just enjoy.

"An apple a day keeps the doctor away". If that´s a part of the daily routine for the Sour Boys. I don´t know.