How did it start?

I got a random call from Stew Johnson who I worked on the Etnies BMX video Grounded with. He said someone had approached him about filming some BMX stuff for a Dinosaur Jr. video. He wasn’t available and basically passed the job over to me. Next thing I know: I fly to Florida to shoot a video that I didn’t really had much information on. All i heard was, J Mascis didn’t like the idea of BMXing because he skates. He was like: „Yeah the other guys can ride bikes and I skate.“ So we got two BMX riders and they stunt doubled for Lou and Murph and Kyle Leeper stunt doubled for J Mascis. The concept was: Shred the cities that they were touring in. The concept of the tour was that they were gonna go to especially small towns and really small venues. So the cities we went to I had no clue about spots or anything. I got thrown right into the deep end and the director happened to be a guy from England. He used to BMX so he had loose sight idea of what he wanted but it was really up to me to find all the spots and stunt coordinate the skating.

"So I arrive in Florida and on the drive from the airport the band manager informs us right there that the band has no interest in making a music video. They hate making music videos. And we gonna have to sleep on the tourbus with the band and he told us that no one wants us on the bus."

So I arrive in Florida and on the drive from the airport Brian Schwarz, the band manager, informs us right there that the band has no interest in making a music video. They hate making music videos. And we gonna have to sleep on the tourbus with the band and he told us that no one wants us on the bus and also he said: „J Mascis’ gonna appear like he is zoned out on drugs but that’s just how he is. He is not on drugs.“ Brian is an awesome guy but his motto on the road was: „We’re here to make money. Not spent money!“ They worked on such a shoestring budget. I know they’re not a huuuuge rock band but you know it’s Dinosaur Jr., they’re legendary. And just to see them doing everything like dirtbag skaters would do it back in the day was kinda sick. So we get there, meet the guys. The first night me and Kyle were nervous going in the bus because they’ve already said they didn’t want us there. All the roadies are in the bus, they are all hard working dudes. It’s a tough life on the road. It’s a crazy schedule. Way harder than any skate tour I’ve ever been on. So we didn’t wanna space invade too much on the bus and went for some beers and tried to creep on the bus late at night when everyone was sleeping and I think we pissed everyone of pretty bad because for some reason… you know when you’re not supposed to laugh… we just found something stupidly funny and we just were busting out laughing. I think we woke everyone up on the bus so it was like a little harsh impression for the first night. And then the first day of shooting… What I would do is: I would use Google Maps or talk to skateshops and just try and find anything within skating distance of the venue. Because the deal was: The tour bus will park close to the venue at a hotel, they got one room for everyone to shower, they set up for the show, they play the show and then we drive through the night to the next place. It was a very short time to find locations, get everything shot, while the band is doing their soundcheck, then get the band to do their shots and then make it work. 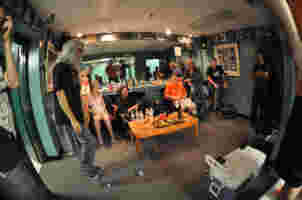 I guess you were a big fan before you shot the video.

Exactly. A lot of skaters from my generation are definitely big fans of Dinosaur Jr. and I heard that if I didn’t shoot it at the time they will just gonna get J Mascis cousin or somebody to shoot it on a camcorder and I was like: „Man, I gotta make it good because I don’t wanna see a Dinosaur Jr. with skating in it and it’s whack“. But like we had no budget or vehicle so I would call a skateshop and this would get a kid to come and drive us to spots. So the band would be in the back of some sixteen year old skaters car and sometimes we would be behind a supermarket on a loading dock filming and he was like: „Ahh, I gotta pick up my sister and baby-sit right now. My friend is gonna come and pick you up.“ So we just wait there and some random guy we never met would show up and take us to the next location. Overall it was a super fun experience and aside the first day of shooting the band very quickly went from not wanting to do the video to really being into it because once they saw the way we were shooting it and gonna edit it with the stunt double being funny they saw that it was gonna be a funny concept. And they liked that it was just me shooting skate style. Most music videos have quite a production going on and this was as run and gun as possibe, so they were hyped cause it was easy for them. They were like: „Man, we get to ride bikes and get to skate“. Normally they are sitting around waiting to do soundcheck and now they were like: „Oh we actually get to see the city we’re in“. So they had a great time. It was really cool to see that perspective change from not wanting to do the video to „What are we going to shoot next?“.

You wanted to make it obvious that there are stunt doubles in there, right?

Yeah, but some people thought we were trying to be serious and there were comments on YouTube like: „That’s not J Mascis!!! He’s not doing that Varial Heel!!!“ Some people didn’t realize it was a joke…

Did J actually do some tricks?

J did the Daffy Duck, the rest were all stunt doubles. If you saw the part where they slammed, I had to teach him how to slam. And it was in Florida, middle of summertime and it was super hot to touch the ground and we were rolling around like pretending to slam. It was a kinda ridiculous scenario. But those guys got really into it. Murph got really mad when he „didn’t make a trick“ and the BMX guys shouted: „You can throw the bike.“ So he got angry and threw the bike. They just thought all tis stuff was super fun.

Is J actually still skating or did he skate when he was younger?

He skated when he was younger and he has always been down for skating and obviously he had the closest relationship with Alien Workshop since the first video Memory Screen. He has actually made music for their videos. They gave me a Dinosaur Jr. and Alien Workshop board. He’s an older guy and I don’t think he shredded hard but he still rolls around.

Lou and Murph? Did they ride BMX?

I don’t thing they’ve ever rode BMX. But they were really getting into it. They had to ride up to the bench and act like they would bunny hop on to it. And there was one trick where Kyle does a varial heel on flat so I’m filming low looking up at J and I’m like: „Act like you’re gonna pop and throw your arms out.“ It was also cool because Mike Watt and his band „The Minutemen“ were on the tour as well at some stops so we did some cool backstage stuff behind the scenes and had cameos of Mike Watt. So it’s extra special and even more skate history and it was cool because I got to know Mike a little bit from that shoot and when we did Album I hit him up for music and he was so hyped.

So he has a cameo appearance in the clip?

I think he boardslides a table full of food in the backstage and Mike is in the scene and then here is another moment where Mike is sitting on the front of this old school pickup truck while J is just kinda cruising by and stuff. 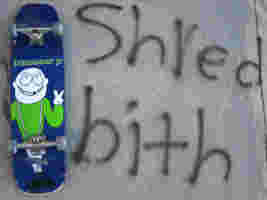 Dennis Ludwig ist always out there in the streets with big equipment.