Michi Mackrodt is a real globetrotter. Traveling with a train to Siberia or island hopping with his dearest - without traveling he is not himself. And of course he always skates on his trips even if it's not planned or the camera equipment doesn't work the way it should. With his Filmer, Palermo, and an old Bolex camera in the backpack he stayed at the Casa Maccarnoi on Fuerte Ventura and filmed for a video essay. 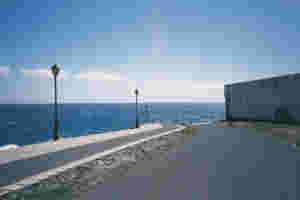 You left for the winter, right? Where’d you go?

My girlfriend and I ended up on the Canaries. It was so good. We hopped the islands for six weeks. There were unbelievable waves for surfing everyday. Great conditions. The islands are really small but incredibly diverse. You can forget the south though. Actually you could do a photo series of red headed Englishmen. No matter if the sun is burning or there’s a full on storm blasting: They’ll be downing beers at every corner mid day. Besides that, the landscapes are amazing. Every island was really different and the people are super relaxed. Tenerife was great. Fuerteventura as well. Sometimes you’re a little bit disappointed because one island is really green and lush, almost tropical, and the next is just dry desert. But after two days you realize how sweet it is. Imagine being in the Sahara but after a five minute drive you start seeing the ocean. It’s so incredible.

You can see it in the video. The landscape looks amazing.

It was. But it was a bit of a hassle. Palermo [Julian Weigand] got this old camera half a year ago. It’s a Bolex, it was originally a 16 mm camera from the ’60s but they re-issued it. It’s all digital but you still have to use all the old lenses. It’s super sensitive. It’s impossible to film while skating along so you’re pretty limited on the angles. The viewfinder is tiny and the footage becomes really shaky anyways. You need a tripod for sure. We only wanted to do the lifestyle-shots with it at first but after a while it became a mission to do something with the Bolex only. But it was hard to make the spots look good without a fisheye. That kinda became the challenge. So we left all the other equipment at home and got into a pretty cool vibe. It was windy as hell though. We heard that the wind won’t stop for four days so we looked for spots that are somewhat sheltered.

Since there’s not that much infrastructure you barely have any of these though. If you find something, it’s pretty much in the middle of a roundabout. The wave-spot for example. You ride up to it downhill and push like hell and as soon as you stop, you’re slowing down. It would’ve been such a good spot but you couldn’t even ollie. The wind pulled the board away from under my feet. After the wind stopped, we went back to some spots and it was going really well the one day but then we were skating this bowl with big holes all over it. There was this one spot where you could grind across this channel. It seemed easy as I approached it but on the first real try I kicked out and landed on a straight leg. My ankle swelled up right away and I ended up tearing my ligament. I couldn’t do anything the next day and we banked on a speedy recovery, iced it all day and kept it calm. A friend of friend was traveling around and she happened to be a physiotherapist. She had a little studio in her van, worked on my foot for two and a half hours and taped it really good. After I warmed up, I could at least skate one spot a day. But when we got back in the car it started hurting straight away. I couldn’t do any flips or jump off of anything. It sucked because the weather had just calmed down. 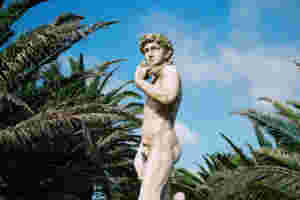 Michi Mackrodt and Jan Kliewer tried a different road and went to Kenya.

"Eye of the Tiger" may not be the background music but Michi's skating is on point!