Stu Smith is 43 years old, loves tea and biscuits, and runs a company called Lovenskate. However, first and foremost, Stu Smith is a skateboarder just like you and me. It seems as soon as so and so skater passes 40, we’re meant to say how amazing it is that they still skate, how much of an inspiration it is that so and so skater is still skating, and how they prove that we’re all going to be able to skate into our older years. I know Stu Smith really quite well, and I’m fairly certain that if you start talking about how amazing and inspirational it is that someone his age still skates, he’ll more than likely stop listening to you and make a quiet mental note that you’re probably not worth listening to in the future. What is amazing and is inspirational about Stu Smith is the way in which he built Lovenskate from nothing into the amazing company it is today, representing skateboarding in the way he saw fit without ever pandering to a single neeky fashion or trend. 20 years later, Lovenskate is stronger than ever, and Stu’s still working hard to make skateboarding as fun and creative as it could possibly be. Isn’t it just so amazing and inspirational that he’s still skating at 43 though? (by Nick Sharratt)

[Maité, Jordan, Sox, Jackson, and Stu meet at the Lovenskate headquarters and first of all talk about Maité’s zoot determination table for quite a while till Jordan starts with the questions.]

Jordan: How long have you been doing Lovenskate?

Maité: It’s said that you have to spend 10,000 hours on something to become a master. How many hours have you spent on screen printing?

A lot of hours!

"If you’re gonna do something, you gotta eat, sleep, and breathe it. You should wake up the next day and still taste it and feel it in your hands, it’s got to be hard work."

Jackson: What stuff are you screen printing besides boards?

Sox: You ever screen printed a body?

Do you remember Front magazine? Kind of a lads’ magazine. I knew the guys running it and they asked me something similar, but I declined. I’m really happy I did. Imagine something like this surfacing after all the years, Lovenskate would get canceled instantly. [laughing]

Sox: Who does the quotes on the stickers?

Me a lot of the time, and then just being in the van. The “real men skate curbs” one is from an Indy trip with French, where he randomly said that.

Maité: Is it true that you dipped some boards in tea?

Yeah, they’re stained with Assam tea. The guy at the factory is down to do special projects. He bought shitloads of Assam tea and put it in the water to dye the veneer, and they get a brown-red color. In the future, I’d like to dye only with natural materials, tea, eggplant skin… Dwindle is doing something great at the moment: they changed their whole factory in China and recycle all the used water and the glue and veneer; and they’re planting so many extra trees per tree that is cut down. Really inspirational.

Jackson: I also like that you put the boards in paper bags.

Jordan: You can also hide boards in there if you want to get them in your hand luggage.

Maité: Ah, good travel tip. What tips & tricks can you give for screen printing?

Basic fitness, you need strong forearms and biceps. It is a full-body workout. It’s important to stretch before screen printing and keep hydrated.

Maité: It will help your hips and back if you screen print a lot.

When you’re making screen prints, you’re making the same thing over and over again – repetition of an image. That can become pretty rigid. There’s not much space for fun, so it’s important that if you make mistakes, it’s the art bit of it. Otherwise, you just make a thousand of the same things, it’s almost like producing bullshit in a factory. You should learn to accept those mistakes cause that sets each one apart. I think Warhol named it punctum. Oh, and remember to fully wash the screen if you want to use it again. 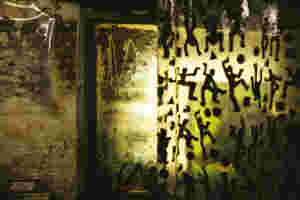 Sox: And you predominantly just print your own stuff?

Yeah, I stopped doing all the other stuff. I still do a bit of stuff for Carhartt, Vans, and Palace, which is wicked, but printing school uniforms and other nonsense is mental. It became like a factory. When I was doing the other stuff, however, Lovenskate wasn’t really selling what it is now, so I had to do it. Working for clients means you have to be perfect with the designs and match deadlines. That’s really stressful and not sustainable for a job when everything you really want to do is make art and go skateboarding. So I fucked that off. 20 years of commercial printing teaches you how to perfectly do a job. If you’re a ballerina and do ballet for 20 years and then go off and do expressive dance, you have the background of ballet to make you the best expressive dancer ever. Lovenskate is a lot like expressive dance with a ballet background.

[Stu takes a phone call and the rest is talking about how ballet dancing is a similar career to skateboarding and question if it’s even harder.]

Maité: Let’s talk about tea – you make Lovenskate tea. Is that really your flavor?

Yeah, it’s blended for us in Somerset and it’s very delicious. 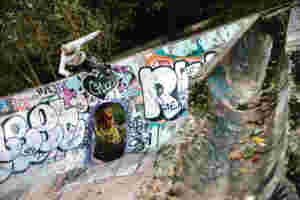 Jordan: How did you get to print all the banging Metallica album covers?

That is because there is a guy called Chris who works at the European side of Metallica and handles all the merchandising. He is a collector of screen-printed music posters and skated back in the day. He found out about Lovenskate and phoned up, “Would you be interested in doing this project with this big band? I can’t say which band it is, but they want some screen-printed skateboards.” I said yeah and he said that he’s on tour for three months but will get back to me. I nearly forgot about it and then he called me up again and said, “So you’re still interested in doing Metallica boards?” And I was like, “Of course!” Although they’re shit now, back in the days when I was a kid, I was a massive fan. So I said to him that I don’t want to print anything after Justice, cause that’s like the end for me. And to keep it tied in with skateboarding, it should be Pushead graphics because he did those Zorlac graphics. He then sent me the pdf of all the Pushead Metallica graphics and said, “Take your pick.” That was an unbelievable opportunity. It’s funny how things come about. There was a competition on an old website called Caught in the Crossfire. They did some music promotion for some Metallica album and there was a coffin-shaped skateboard to win. I won that board and wasn’t so stoked on it. I liked the coffin shape but not the logo of the album on it. Then a friend told me that Metallica is coming to The Great Frog and I gave him the board to sign and I got it signed by Hetfield. That was ten years ago, and then I printed boards for them.

Maité: Anything new that is coming out from Lovenskate?

It’s like a slow burner… I feel like if money was fertilizer and you have a tree and put all that money in, the tree will grow very quickly and become really big. However, there was no fertilizer for Lovenskate, so it’s growing slowly for 20 years, but now it’s pretty solid. It’s not a big tree, but it’s a strong tree.

Sox: You went through the storm of the independent board company massacre.

Yeah, it’s been a pretty mad time over the last few years. Suddenly there were a lot of medium-sized fish in a very small pond, it got unsustainable. We lost some really good ones, but we also said goodbye to some really shit ones. The thing is, it got to the point where anyone with a bit of cash and a copy of Photoshop could have a skateboard company, just email a Google image to a board factory and “voila” – and it was cheap back then too. A lot of these companies weren’t really giving back anything though, just quick-buck skateboarding. That’s not good for skateboarding as a whole. In my mind, if you’re gonna do something, you gotta eat, sleep, and breathe it. You should wake up the next day and still taste it and feel it in your hands, it’s got to be hard work. Having been around for so long, it seems like now bigger stuff is coming our way, which is really lovely. Collaborations and partnerships – 2022 will be exciting. And I’m going back to Bolivia and to Peru to the new Concrete Jungle Foundation park, bringing a lot of boards and a lot of love.

A blank canvas for your creativity & a trip to Spain!