Whenever Nizan Kasper is editing a video, you know that it will be good. It might not be exactly like most of the other skatevideos, but I’d say that’s a quality characteristic. This time it’s not for the Stanley We Crew but for Hamburg’s Lobby Skateshop – but that’s kind of the same crew anyway and Nizan has some stories about them, illustrated by photos from Friedjof Feye. 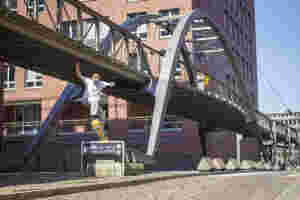 Claims to only eat the healthiest food there is but somehow all the time we go out filming together we end up at McDonald’s. Maybe it’s the dead end district spots we check out and there is no other food around, but one thing is for certain: I have never ever heard anyone ordering a Chicken McNuggets maxi menu faster than he does! Love our filming missions and little evil restaurant dates!

Is playing a DJ Set at his residency club Pal Hamburg, while working full time, while having a whiskey sour, while filming 3 full parts, while being on 3 skatetrips at the same time, while having a date, while picking up boxes from the Clepto warehouse on his scooter, while having a golf match, while listening to the Bunt, while having a coffee, while doing a tailslide while taking a nap, while recording a new track, while flipping out of the tailslide… This guys dopamine level balance is built different. 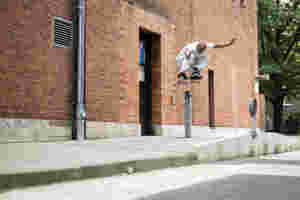 The one who will stay at the local Spot RSB to work on his tan and film a couple instagram clips to promote a random music box. Dont judge him too quick! Once the tan is right he will bring the box to the sessions and film a solid part in a minute. Once that is done the photographer who came to town to shoot photos for the video release will see him walking out the club with a drink in his hand 12 noon.

Co owns a record store called “Remoto”, releases records and is Dj’ing as “aii_ps”, is haveing exhibitions as “Lars Witte” and sometimes gets a skateclip as “Lars White”. I am a fan of all of these guys!!!

Broke his hand but wanted to stay at the session because he was so hyped we came to skate his childhood neighbourhood. Once healed up he would always patiently wait till everybody is done talking, claiming and bunting. Once he finds his slot he will get a trick in a couple trys and surprise a crew of Bunters. I guess we can learn cool things from you? Welcome to the LOBBY Team buddy!!! 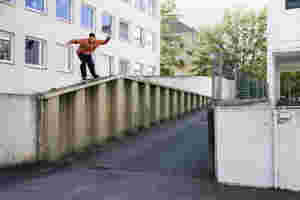 Thank you for support and letting me do my thing! <3