Advertisement
After putting out bangin videoparts at a young age, Spanky drifted into the party lifestyle and kinda lost the fun in skateboarding which led to loosing his pro board. But he went through this phase and is back with a part in the new Emerica Made Chapter Two video (which is available on itunes and Google play now). We met him right after the premiere in Frankfurt.
[Interview & Photos: Stefan Schwinghammer] After the little off-time from skateboarding, how did it feel to be back in the van and film for a new part? It was great, I love to be back in the van. The process of filming is something I missed so much. The time dedicated to skating and filming every day and try to push myself. The time with the guys – it’s the best. A lot of you guys are over 30 now. Is it a different vibe in the van or is it the same like when you filmed for This is skateboarding? It’s definitely a little bit different vibe now. It is more laid back and also as we get older I think we are more capable regulating our own sort of drive. It’s not like we have to be pushed in to doing anything, we know what to do at this point and we do as much as we possibly can, whatever our bodies can do. In a way it feels like less pressure but then also we put more pressure on ourselves. Because it’s tough out there. People rip so fucking hard. You wanna have fun but you also wanna skate well and not be disappointing out there make a fool out of yourself when people are grinding giant rails and doing shit like this. Has your skating changed after your off time? I think it’s always changing, it’s just you get into a sort of rhythm of the tricks that you’re into at the time and whatever you’re doing becomes more natural. I mean there was a lot of jump downs like big stairs and stuff and some things that I tried that didn’t end up in my part. But yeah, what gets you stoked and what you are capable is always kind of changing. What do you like the most now? What tricks feel the best? For this video we were skating a lot of schools and tables and ledges and stuff because we didn’t really travel much. So in L.A. it’s just our surroundings, skating a lot of this spots that are local. And in L.A. it’s harder, cause everything has been skated so much, so it’s harder to get a trick on a rail that exists in Los Angeles that hasn’t been done. So its matter of finding spots you like and finding tricks to do on them. For other projects we traveled a lot more, so that kinda shapes the way your part comes out. Was it a conceptual decission to not really travel for the video? I think it’s just a different time in skateboarding and there is not as much budget floating around but I think once we started filming and working on stuff, we all liked the way it was looking and it wasn’t all filled with China and stuff. So I think it happened on accident at first and then it began to gave a look and feel to the video we stuck with.

I prefer to see people skate the environment they know anyway. Plus you get the better tricks, cause when youre on tour you don’t have the time to think about tricks or the time to do them. Yeah and it can be like a little more challenging sometimes but at the same time it can also be nice, because there are so many spots in that video, stuff that I grown up skating and been skating for years with Jerry [Hsu] and have an emotional attachment to those spots. I met Jerry in Berlin when he had his exhibition and he told me that it’s hard for him to film for this video, because nowadays after a day of filming he has to recover for three or four days. Was it the same for you? Well, I definitely I don’t recover the way I did when I was a kid, that’s for sure. But at the same time this was the first time in a long time that I just been out skating every single day. So that made me feel the most resilient that I felt in many years. Still doesn’t compare to being young, but I felt pretty good and I wanna maintain that feeling of just beeing out every day no matter what. If it’s a part of the routine then it doesn’t feel abnormal to feel sore. It just feels like part of the job. Skateboarding is fun again? Absolutely! This last year was the most fun I had skating in my entire life. Since you got your pro board back… Yeah, I mean not as a result of that. I’ve just been appreciating skateboarding more than ever. What it brings physically, mentaly, as a community – all aspects of it. I’m at an age where I can appreciate it the most. Was there ever a point where you thought about stopping with skateboarding? Never like stopping but I was just very discouraged because I felt mentally and physically pretty bad and I couldn’t find a routine to get me as passionate about it. It feels different now for sure. So the videopart is done. What’s planned next? Well, straight into Baker4 I think. Filming for the next part? Yeah, I mean maybe I take a little bit of a break, but I don’t wanna get soft, it happens quick. This video took a long time but there is still lots of stuff that I wanna do. But you didn’t have as much time as the rest of the guys, right? Cause I guess they started right after Made 1 and you started… Yeah, a little bit later then the rest of the guys. I think for a while it was very unsure wether I was gonna have a part or not, until maybe the last year. I feel like I’ve gradually been getting more comfortable every day. I don’t know, it’s strange, it takes a while to get your legs back. Then I’m already curious about Baker4, but I guess it might take a while. Maybe two years. We’ve been talking about it a lot, but hopefully no more then two.
05 Oct 05, 2016 Posted in: Features 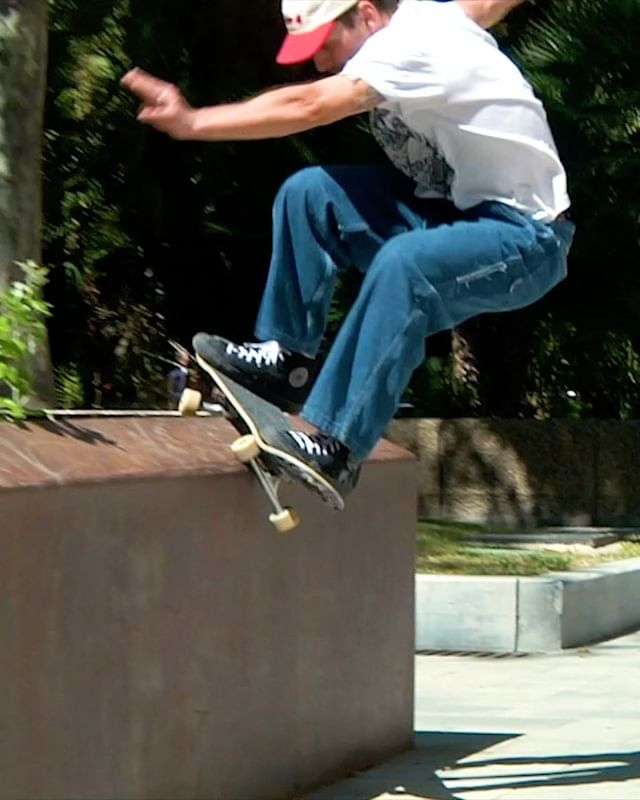 Eniz Fazliov and Rob Maatman each get their own Emerica color way – and that's well deserved.