I met Julien Paccard in Berlin while we were working on our Skate Urbanism issue. He was telling me about the project he was filming on – a video that is based on the different materials of spots. In the end Julien did a doublepage with collages of the spots for the issue. Just recently he sent me his new part and asked if we want to put it online. For sure we wanted. We’re always interested in people who think out of the box and Julien is clearly one of them.

You did the Color Fools video and you had a part only on blue spots in there already. Now again blue. Is it your favourite colour?

Yeah, definitely. But I mainly filmed this part because I needed to test a new camera, train to film and edit with it for the next big project. Cause the files the camera produces are kind of hard to handle. It’s not a camera made to film skateboarding at all.

What camera is it?

It’s a 16mm camera called Digital Bolex. It is digital but it reproduces the look and feel of 16mm really well.

Why did you choose this camera?

I didn’t want to film with a VX again, the next project is about the textures of spots. If you have an image that is more HD you see the details of the surface really well. So I wanted a nice looking image but not too clean or fake. I wanted to capture something that feels authentic, organic and grainy. I was really lucky to put a hand on that camera because it doesn’t get produced anymore. They only produced it for two years or so. I think they had some obvious difficulties with the competition and had to stop producing it. 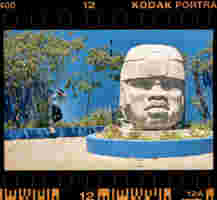 So you filmed a video that is about the colour of the spots, now you film one with different textures. Is your skateboarding OCD driven?

[laughs] I’m not sure. I think it’s more a language I’m developing. I like to only focus on one aesthetical aspect and I build up a story around it.

What do you want to express with it?

I’m not very much interested in classically making skateboard videos. There are some other fields to explore. As a skater, you’re really sensitive and pay attention to a lot of stupid details at first sight. That's the result of practising a lot. I want to focus on those aspects, rather than the performances of skaters. I want to tell a story mainly driven by a piece of dirty curb and not an amazing nollie flip on stairs. That's what I rather care about.

It’s not really different. You have to find skaters who are not too selfish, that’s the only barrier. Those who participated knew that they would probably only have one or two tricks in the video and maybe they won’t even get noticed cause a lot of the time I only film the feet. But it’s not really different. We go on a session and what happens, happens. I don’t put pressure on skaters at all. I don’t ask them to do the hardest trick they can. I don’t care about that. It’s more about using the spot the best way possible.

"I want to tell a story mainly driven by a piece of dirty curb and not an amazing nollie flip on stairs. That's what I rather care about."

Is it harder to find the right coloured spots or the right material?

Both are equally hard to find but for example, I thought there would be much more wooden spots out there but it’s very hard to find wooden benches or something because wood is not that much used in the streets. For a logical reason: it rotten fast.

Do you have a database of all the yellow or marble or wooden spots in whole Europe?

Totally, I use Google Drive space when I find pictures on the internet or find spots on Google Maps. I save everything, the address etc. It allows me to create folders per colour or cities, and so I know if there are enough spots I need for a trip. It saves a lot of time while travelling. An organised database is important for projects like that.

I met Jim Craven before he went to Sri Lanka to film ditches and he showed me a map of ditch-spots in Sri Lanka. You might have a similar exclusive spot list.

I’d love to see his database. If somebody wants to see my database, I happily put it public. 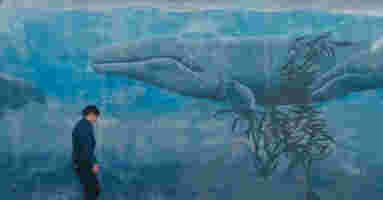 Can you talk a bit about your upcoming project?

I’m finishing it up at the moment. It’s called GRRRND Zero, with RRR like you hear wheels rolling. It’s about textures. The difference to Color Fools is that there I attributed one colour to one skater. This time it’s one long so-called "friends part" with everybody who wanted to participate. I filmed a lot of new people I didn’t know before. And it will look different because of the camera. But the most important difference is that all the seven parts will have music that reminds you of the tonality of the texture for each part. For example wood, and my idea is, when you project all seven parts on a wall at the same time it becomes one song with seven instruments playing. I started filming four years ago and now that we’re stuck indoors due to this quarantine I take benefit of that and finish the edits for all projects.

Who produces the music?

It’s a skater friend from Jena called Tommy Buder. He’s making the music at the moment, at home as well.

And when will the video be ready?

I have to wait till the music is finished and then edit on the rhythm. Because the 7 parts are synced and there is this one moment in the film when it’s projected on the wall where you only see textures on the screen for a bit. But hopefully, in two months it will be ready.

This part is more than just aluminium rails.

As expected, the filming for this part of "GRRND Zero" was mainly done in Italy and Greece.

That’s not your everyday skatevideo. Julien Paccard releases 7 films on 7 textures that will be one skatevideo in the end. Here he tells the story.

Nick Michel talks about how he gets inspired by the 80s, getting Mark Suciu instagram shout-outs & and remembers some skate house nightmares.