is loading
Home Interviews Skateboarder I just put it in my bag with all my other stuff
Share this:
E-Mail

It doesn’t have to be expensive, shiny, rare, or extraordinary. It can be, for sure, but it doesn’t have to. It can be a barf bag, it can be art, or it can be ham. Whatever it is, it tells its own story. So we asked some well-traveled friends about their most beloved souvenirs from the road. 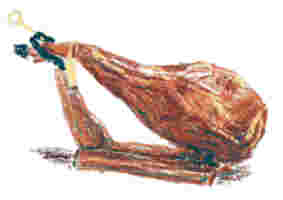 I once took a 6-kg Jamón back home from a tour. I just put it in my bag with all my other stuff.

I found this little guy at a coffee shop in Oregon near Seek Skate Camp. It made me laugh. It springs up when you press down on its head. I thought it would be a good companion for the road since I was getting ready for a road trip. As I drove over 10,000 miles around the States, I periodically looked at this little yellow dude and no matter what the weather was or where I was, he was always cool, calm, and collected. It was a good reminder on a key to living life…

I was lucky enough to acquire this piece on the Tiwi Islands, an island off the north shore of the Northern Territory, Australia. We flew up there with some of the Pass~Port team to build and skate ramps in the local indigenous community. Visiting somewhere so remote and full of incredibly strong culture was very eye-opening to myself and the team. This piece is a Tiwi Totem and they are significant to the Tiwi people, who inherit these cultural identities from members of their family. I will forever cherish my time on Tiwi and this small piece is a constant reminder of it all.

I bought these paintings off a man named Omar in Marrakech. They remind me of the outsider art I used to study in college. It’s really great when you get an opportunity to support working artists as a tourist – often, you need the help of a local to find that type of stuff. I think I probably bought seven larger paintings off him and have decorated my studio with them. Wish I could send him a photo! 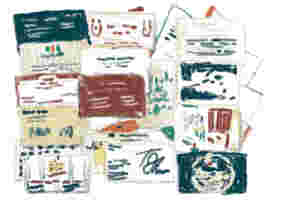 In the beginning, I thought it was a stupid idea to collect business cards of people that I’ve met. Then again, after a while, I figured that these cards remind me of special people or places, so I kept on doing it. Even though business cards used to be way more popular, they can still come in handy nowadays, or at least, can be a beautiful piece of paper if properly curated. Although I don’t regularly collect cards, they run like a golden thread through my life since they combine dates, people, and places. All in all, they are just a really good memory to me. Every now and then, I stumble across cards from skate mags, artists, or even random people that you meet out there in the streets. I also kept some cards from thrift shops, bars, or restaurants from all over the world. So I just won’t forget where I’ve spent fractions of my life.

Around 2008, I traveled through Myanmar (Burma) with my wife. There was no internet there at that point (besides in the only 5-star hotel in the capital Yangon, where only the upper class was allowed to enter). The country was more pristine, but also the political problems were more hidden from the public. On our way, we became aware of a theater group that had spent more than six years in prison or re-education camps because they were criticizing the system. The so-called Moustache Brothers, however, stayed true to the cause and did illegal performances in their garage – with the help of scouts who scoured the streets for police informers during the shows. In a repressive system like that of Burma, this is a proof of extreme determination that impressed us a lot. As a souvenir and for financial support, one could buy these traditional puppets after the performance – hence the emotional value of this souvenir. 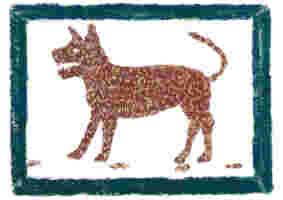 This is one of my favorite pieces I picked up while travelling through West Africa. I was on a trip with Sam McGuire, skating through the city of Dakar in Senegal and the islands of Cape Verde. I found an artist on the side of the street that created images of animals and people using only butterfly wings. From far, you only see a street dog, but as you get closer, you realize it’s made out of hundreds of butterfly wings. Every time I look at it, it reminds me of eating fresh fish and sea urchins with beer in villages along the coast with the best people.

Entering North Korea four times so far has always led to stress and anxieties for me. As much as I hated the thought of potential imprisonment within one of the most depressive states, it is easy to get addicted to the thrill. Usually, I would enter via train from China where security and immigration are on high alert. Once I accidentally brought in an issue of the Economist, which I was able to dispose minutes before customs was checking our belongings. Other two times, I stupidly brought in a book which described the story of someone escaping Ceaușescu’s Romania, and the other time, a biography on Saddam Hussein. Both times, I was lucky that the North Korean customs officer didn’t understand English and I made the gesture of them being “fictional,” which I was told by my guides to do on any reading material to be brought into the DPRK. On one visit, with my Russian friend Kirill Korobkov and British lad Laurence Keefe, we flew from Beijing. Not much anxieties this time around, just a short one-hour flight from Mainland China’s capital. We were flying in for Kim Il-sung’s 100th-year birthday party back in 2012. Besides the obligatory flowers one is recommended to leave for the eternal president, I had no gifts, just a video camera and a skateboard. Besides that, why would I bring a gift for a late dictator? I should rather be gifted something for the stress of entering the DPRK. My gifts usually consist of tourist T-shirts, coffee mugs, and fridge magnets. Since those are hard to find within North Korea, the souvenir for me ended up being a North Korean barf bag.

I spent over a week camping on the Oglala Lakota reservation in South Dakota, USA, at the invitation of a few local skate friends, Kyle and Eric, who are building a movement under the name Lakota Skateboarding to support their skate community by building a DIY community center and running weekly skate camps and contests at the local skate park. I got to take part in this effort and spend quality time with the local skaters. At the start of the skate contest, I was given this beaded medallion during an honoring ceremony that was held for us guests. Of all the places and experiences I’ve been lucky enough to have had in this big world through skateboarding, this was by far the most personal and impactful. This medallion and buffalo horn that were given to me by my friends, who opened their doors and shared their stories with me, are among my most treasured of all mementos I’ve collected over the years of traveling and skateboarding. 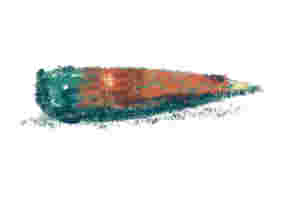 I’m not sure if you could really call it a souvenir, but one of the most memorable things I ever took home from a skate trip was a bullet taken from a wall in Afghanistan. Skating in Afghanistan was – as you could expect – rough and dusty, with an uneasy feeling in the pit of your stomach knowing that anytime there was a slight chance that someone could try and kidnap you or blow you to pieces with a handmade bomb. The guards we had with us pointing guns at people to get out the way was a reassurance. Or was it just drawing more attention to us, creating a bigger risk? I’m sure they had their own enemies, as all groups in Afghanistan seem to, potentially making us a target of their enemies. The bullet came from a spot. It was a short flat gap at the entrance of the shell of a building where you land into a lengthy bank filled with potholes before flying out into dirt that was hard enough to roll through. This building was absolutely showered in bullets, with huge holes from bombs, missiles, and who knows what else. It was definitely a weird feeling to be playing on skateboards somewhere that has seen the deaths of so many people and played host to countless epic battles. Just looking at the place conjures up imagery of the horrors that must have occurred there. Even the bullet itself would have a story that we’ll never know. We can only wonder who fired it and if it had hit its target before getting lodged in that wall.

Ever since I was a kid, I was fascinated by knives. Everything from a butterfly to stilettos to the black Rambo knife with a compass and all kinds of gadgets. This knife I found in 2008 at a market in Sicily while on the road with the Nike SB crew. I bought one for me and one for my friend Simon, who also loves knives. These ones are illegal out here in Sweden, so it was sketchy to bring it back. Today, I use it as a letter knife to open up all my fan mail. Simon has even tattooed it on his back.

My souvenir is about Tolya [Titaev] being super confident about skating a very tall, long, and mellow rail back in Tenerife almost four years ago. Sometimes it’s pretty impressive how Tolya can be really self-confident about how he’s gonna do this or that. And believe me, when it worked out, it was really impressive a couple times. So that day, he wanted to boardslide that rail. I was honestly a bit stressed cause it really seemed like the eating-shit potential was high. He does a little warm-up on flat till he’s ready, then goes for a warm-up caveman boardslide at the very bottom of the rail (since the stairs were long and low steps) and sacks the shit out of it first try. We laughed so hard afterwards and it still makes me laugh every time I look at the photo with the bag full of ice. It also makes me nostalgic because I really miss traveling anywhere with Tolya, which he can’t do at the moment because of the war.

Some SHRN riders plus friends like Tom Penny went for it in Barcelona.