How to with Paul Zenner

No matter what it is, it always feels like Paul knows exactly what he wants and is one hundred percent in control of what he’s doing. That’s why we skipped the regular interview format and asked him for a guide on how to succeed, and also let his old friend Dennis Rehm explain why Paul is the best.

Paul Zenner aka “the best” on and off the board… Maybe this is also the reason he is often still the one “you will hear a lot about soon!” But for those who know him and especially for the homies, he has long been an integral part of the German and especially the growing Munich skate scene. What makes him so special for many is exactly that: he is one hundred percent skateboarder just as he is one hundred percent family man, and father; and all this while sitting full time in the office. For “Pauli,” there is no free minute that he does not spend on the board, no matter what the weather is like. The most important thing is that he rolls and has a good time with his boys. An absolute man of honor in all aspects of life. Watch out for this guy!

How to film a good part?

First of all, you have the part with the classic structure, like a James Bond movie. It starts with a bang then the story unfolds – a bit of action here, a stylish smith grind there – until it’s time for the big finale, where everything is blown up.

Then, there are parts where every single trick could go viral on Insta. I’m thinking of Giorgi Armani or Hyun Kummer, for example. When you watch a part like that for the first time, your facial features derail harder than to reaction videos of “Two Girls One Cup.” It’s just un-fucking-believable what’s happening there.

The parts I personally watch the most are the ones that end up putting me in a good mood, and it doesn’t necessarily have to be the hardest tricks to do that. However, one thing must not be missing: a real ender – otherwise, you won’t be completely satisfied. It’s like wanting the Playmobil pirate ship for Christmas but getting one made of wood from the eco toy store. Somehow you got what you wanted, but… It also leaves a similarly unsatisfying taste when you see a slam in the video but not the make. Not only romcoms but also parts need a happy ending. 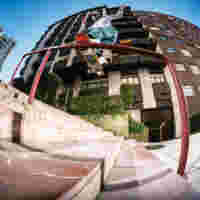 How to roll away from a big spot?

In your dreams, you do it like Gino Iannucci rolls away from the backside 360 in Girl’s Yeah Right. Just stay cool, with a bit of extra spiciness. Then there’s the professional version: landing the trick bolts, emotionless high fives with the homies, and quickly back into the van. And finally, there’s the version that often happens to me, where you’re celebrating yourself or you just push away because you almost can’t stand the amount of happiness – Salabanzi style. I don’t plan to do so, but I don’t ride big spots every weekend, and when I’m able to conquer one of them, it’s just complete fireworks in my head. When I see the footage afterwards, I sometimes ask myself what I’m doing there in the first place. I raise my hand up or just push towards the sunset as if I were Lucky Luke. But in these moments, I just need that, and these bursts of emotions make it clear how much all of that means to me. When I push away like that in a part, it shows that the trick was very special to me. It’s a little bit like in the videos where a kid lands a kickflip for the first time and completely freaks out. But, well, actually it should look like Gino’s. 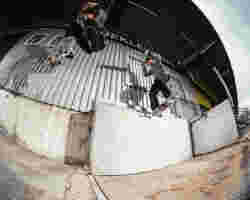 How to find spots?

It sounds simple, but in order to find skate spots, you most importantly have to actually look for skate spots. I mean to look for them yourself! There are skaters who let the filmer/photographer show them the spots and they don’t even know what they really want to skate or can skate. Others comment on Insta posts, “Where’s the spot?” Everyone is hot for new spots and the more spots you know, the easier it is to film clips. But if you just let someone else give you the spots, it’s like just copying the results in a math test: you still haven’t understood the calculation. Therefore, the first rule is to go everywhere by bike and keep your eyes open for schools, office buildings, industrial sites, sculptures, fountains, and so on. By subway, you don’t see anything of the city, and by car, you go by too fast and can’t act spontaneously enough. Sometimes it is also worthwhile to drive past old spots again, maybe something has changed or new opportunities open up through better skills. The second most important thing is to take a photo of the spot with a geotag. For outsiders, it must seem strange when someone takes a photo of a stupid concrete wall or a few steps. Once I was checking a rail in front of a church when the janitor came trotting up quite aggressively and wanted to know what I was doing there. I said that I was interested in the building because I was studying architecture and that the rail was dangerous because it wobbled. He ended up giving me a tour of the church and telling me all about the statics and architecture. 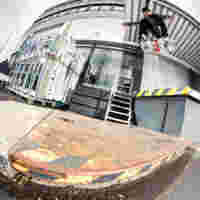 How to find the perfect pair of pants?

The perfect pair of pants are timeless. So timeless that you look at old footage and you still like them. That means the perfect pair of pants are more of a mythological nature and not really to be found. One’s own perception is also subject to trends. I was late to the Dickies trend – but stayed with it for a very long time. By now, I’ve moved away from it a bit. Since I’ve been working full time, I can afford Carhartt pants. I skipped or missed the Surf Pants and later the Big Boy trend. I also always try to separate skate pants and going-out/office pants, but as soon as I like a pair of pants, I have to skate them. There is no chance that I can control myself. If you’re not that deep in the pants game but still want to wear stylish legwear, there’s the Insta account @whatpantsarethose where you can see what others are wearing. However, as with the spot search: doing it yourself brings you closer to your goal. Not everyone can be Vladik Scholz though. 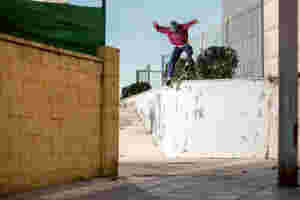 How to balance adult life and being a skateboarder?

When you are a family man and sit behind a desk 40 hours a week, you definitely use the little time you have left for skating more intensively. Sometimes it happens that, all of a sudden, you have three hours of free time and you want to use them as efficiently as possible, but the problem is that you can’t really choose when that happens. So it’s no longer like, “Hell yeah, I’m motivated now, let’s go skate” but more like, “Okay, I have time now, I better get motivated”. Even if the weather looks disgusting or your back hurts from all the hours in the chair – if you want to skate at all, you better take the chances you get offered; and you should try to get the best out of it. For me, I have now resolved to do something new every time I go skating, to avoid just reeling off the usual program, cause I find it pretty dull if skating is just the same routine every time. In the skate park, I rarely had the motivation to try new tricks – but with this little challenge, even riding the skate park is fun again. I get fully into the zone, so when I come back and my girlfriend asks me how my friends are doing or what we’ve chatted about, I’m like, “Well, we haven’t really talked…”

How to learn from Stefan Lehnert?

I feel like you can learn about everything from him: be it beauty tips, something about the US politics, or how to prepare a curb properly. Maybe you should make a column, “How to…with Stefan Lehnert.” There’s no such thing as can’t. That’s what I learned from him the most, apart from the actual skating. Even though he’s a few years older than me, we ride the same spots, we just have different approaches. When we both want to ride a rail, for me, it’s more like, close your eyes and go for it. For him, preparation is key. He prepares everything in the best possible way. Before you know it, he’s unhooked a gate, unscrewed a lamp or built a curb out of nowhere. The problem is, sometimes you want to talk your way out of a big spot, saying that the run-up is not really good. Stefan then disappears briefly and fixes the run-up, so it’s perfect. Then there’s no way to chicken out. By the way, Stefan sits on a pile of sick footage – stay tuned. 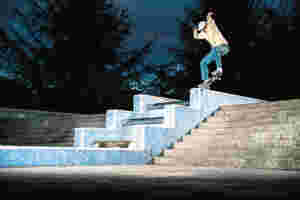 How to enjoy beer the right way?

You listen to a good song, look at the setting sun, and slowly bring the beer bottle to your mouth. You put it to your lower and upper lip – but let air in from the corners of your mouth. It must gurgle when you drink. The first time you put it in your mouth, you can take two sips. And finally, a little trick for wheat beer (“Weißbier”) drinkers: put one or two grains of rice into the filled glass and the foam holds up until the end.