It may sound surprising, but according to statistics, only about 6% of Japanese in their 20s have a passport. A lot of them simply don’t need one, because out of loyalty to the employer, holidays lasting more than a week are very rarely taken, and therefore, people prefer staying home over boarding exhausting long-distance flights. All this leads to the fact that a large part of the population has never left the country. For those who venture anyway, unexpected dangers are lurking behind every corner, such as the Paris syndrome, a temporary mental disorder that is caused by cultural differences and an idealized image of France which often occurs among Japanese when they visit Paris. I’m not kidding. Whereas tourism is booming in Japan, the willingness of the Japanese to travel is quite expandable – for the skaters as well. The so to speak neighboring countries Korea and Taiwan are most visited, and if it should be further away, America is preferred over Europe. One who successfully made the leap to both America and Europe is Hiroki Muraoka. The connection to the USA is due to his team affiliation with Traffic and he visited Europe last summer, having had a guest board on Magenta. In 20 days, he crossed the continent from England to Turkey (yes, he even mastered Paris without any problems) and not only recorded his impressions but also expressed them in his drawings.

How was the trip to Europe?

It was my first travel experience in Europe and everything was brand-new to me – from the way the city looks to the foods they eat and, of course, the culture itself. Each single aspect of London made my heart beat strong. It was the moment of my dreams becoming reality. When I arrived at the London airport, I experienced a huge culture shock, as if I was playing a role in a movie. The brick walls, the London busses, foreign people... everything got me excited. I was also shocked by the escargots and pizza I ate with Soy Panday from Magenta.

"We even pushed full speed to get away from the cops."

Since I was told that the art culture in Europe is very profound, I took my time to go see the creations by myself in order to get a European inspiration. The result was simple: it had a huge impact on me. The massive size of the museums, dozens of artworks that I have never seen, it was simply mind-blowing to me. Even though it was a short trip, visiting Europe became one of my best experiences. Now I am super motivated to make my own creation here in Japan to inspire Europe in return. 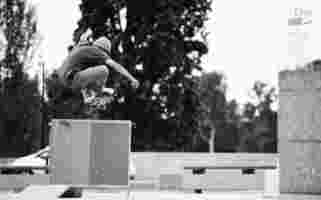 How was your experience?

It was a great opportunity for me to actually see the skate scene outside of Japan and feel the vibe of Europe. All we did was going out skating and stacking up clips every day, but it was very different each day and that kept my motivation going for the whole trip. I was so lucky to meet Reece [Leung]. He introduced me to the Isle and Magenta crews and we went skating together. On top of that, the Northern Company crew was also in Paris and we were able to hang out together (since I’ve known them for a long time). I turned 31, and it is sometimes hard to skate physical-wise, but as long I as I have a skateboard, I am fine. In fact, I was able to visit a lot of places through skateboarding and that is keeping my motivation going for sure. If I am lucky enough to visit Europe again, I would love to go to Barcelona, Berlin, and the Scandinavian countries.

Das einzige, was an Gronzes ...

Daniel Ledermann has never adapted to anything nor tried to please anyone. That’s just the way he is – a true original.

With their skate charity Free Movement Skateboarding Will, Ruby and Oisin help refugees in Greece to overcome their traumata. We had a talk with Ruby.

Ben Gore found his very own niche in skateboarding. He also found a unique approach to his photography, which leads through Sergej Vutuc’s interview.