If you haven't heard of Fries Taillieu yet, the reason for this can definitely not be seen in his level of skating. Despite setbacks such as the loss of all his sponsors, Fries managed to go on several trips including the US and Israel and deliver quality parts. That's probably why he got his own colorway shoe on Globe now.

Fries, yesterday you told me that your Mac got stolen. How did that happen?

Yeah, super fucked up. My girlfriend and me were going to Belgium, because it was my father-in-law’s birthday. We stayed there for a few days and Sunday night we left. We had to take one bus and a couple of trains and in the last train I was sleeping and my girlfriend was reading a book, but quite intensively. So a guy comes sitting next to us and we both didn’t even notice. My bag was up on this thing; you know? He probably took it while I was sleeping. When I saw it 15 minutes later I was like “Fuck!” There wasn’t really too much other stuff in it, so it’s kinda fine. But the Mac is just so much money…

Definitely, and there’s all your personal stuff on it.

Exactly, so I had to change each password and do some stuff. But yeah, that’s how it is.

"You know forklift trucks? I had to give theoretical and practical lessons to people for those kinds of machines"

I heard that you were studying to become a sports teacher. How did that work out?

I’m just gonna explain the whole thing. Basically, what I did was I went to college after High school and learned how to become a sports teacher. So I got that degree in 2011 and after that I just skated and skated. I went to the US a couple of times and tried to film some parts. Then there was just the point were I was like “I have to start working”, because I couldn’t live off skating anymore. I was sponsored by Gravis and Analog for a while, but when I was in the States, the team manager came in the room and was like “It’s over with Gravis and Analog. Burton pulled the plug, so the two brands are gonna focus on Japan” or something. That was really shit, because it was the third day of my three-months-trip. So I focused on filming and releasing a part. The thing is that if you want to be a sports teacher in Belgium, you are in a fixed life. You have to give lessons during the week and if your sponsor calls you and says that you have to go on tour, it’s hard to do. So, I was working different factory jobs when Globe came around and paid me. But I still had to get a job, because it wasn’t enough to come around in a month. So, I got a fulltime job for a year until another sponsor came around called Afends, an Australian clothing brand based on surf stuff but they wanna go into skating. So I quit my job, because they could pay me as well and with the two salaries I was able to make a living. Then, seven months ago, I moved from Belgium to Amsterdam to live with my girlfriend.

And what exactly was your job before you could live off skating?

Basically, the job that I did was kind of an instructor for heavy industrial machinery. You know forklift trucks? I had to give theoretical and practical lessons to people for those kinds of machines. It’s a stressful job but it’s kind of relaxing at the same time, because you don’t have your boss watching over your shoulder all the time. It was pretty good, but if I have the possibility to just skate, I’d rather do that.

Were the things you’ve learned during your study beneficial for your skating?

I really liked physiology and anatomy. It’s super interesting. You learn everything, from the bones in your body to the different muscles you use for specific movements. You also get a lot of tips around stretching and that kind of stuff. I’m just interested in it, so I check stuff like that online or I try to find exercises that are helpful for the injuries I have.

What’s your inspiration in skating? Where there any video parts that got you stoked?

Arto Saari’s part in Flip Sorry is definitely the number one. I also liked Gilbert Crockett’s part in the Vans video. I don’t know, there are a lot of good skaters.

"In the end, the fun factor still has to outweigh the other factors."

You already spoke about your time in the US. How was it?

It was a really big dream of mine to go there, because if you go there and skate with the pros they might notice you if you skate really well. And it’s good to be around people that have a really high level of skating, because then you have to keep up and try to jump on higher rails and do harder tricks. You have a little bit more pressure, which I kind of need to try something that I’m a bit scared of, you know? When I arrived there, it was kinda unreal to me; seeing all those super famous spots and seeing how low the rails actually were, instead of seeing them in videos where you’re thinking: “better pop good.”

And did you notice any big differences culture-wise?

The mentality with skating there is to go out at ten in the morning, skating all day, filming as much as you can. It’s really intense in the US. In Europe it’s definitely more laid-back like one guy wakes up at 10am, the other one at 12am and we start skating at 1pm. Sometimes it’s necessary to have that mentality, because that’s how things get done. But the skate days where everybody is chilling and gets up when he wants are the nicest for sure, because you’re around friends and you could just have fun without focussing on certain tricks. In the end, the fun factor still has to outweigh the other factors.

I just saw your recent Hall of Meat slam. What exactly happened there and how did it land on Thrasher?

It happened in San Pedro where you have this grey rail and it’s actually perfect. The only thing that might be a little bit scary is that you have this white curb on the left side of the rail and it sticks out a little bit. It’s basically just a mind fuck. If you don’t think about you’ll be fine. So I was going there and tried to backlip shove-it it. I did it the first time I went there, but it wasn’t really clean, so I went there again and hurt my right foot, which was kind of okay again after five days. So I went there again, landed it perfectly and broke my board. I was like “Fuck, I really want to get this.” Because of the shove-it my nose was broken, so I changed my board around and skated basically only with my tail. Even though, I bended the nose back the grip was partly gone and I kinda flipped over my board and stuck with my right foot in the curb and slammed. It wasn’t really that bad. I don’t know if it’s really Hall of Meat worthy.

Yeah, in the end of the clip you already said “I’m fine...” Did you still make it?

No, after I broke my board I didn’t really have enough time for it, because I was only there for two weeks.

You already said that Globe hit you up after Analog and Gravis dropped their skate team.

Not immediately after Analog and Gravis. I was just getting shoes from here and there. I think my friend Ryan Allen, who was the team manager for Gravis and Analog, told Steve Black [Global Skate Marketing Manager at Globe, editor’s note] about me and after he saw my video part from Hi-Tide he hit up the European team manager who was like “Hey, do you wanna ride for Globe?” At first I wasn’t completely sure, because I had something else offering and I didn't know what would be the best idea. But I went with Globe and I’m super psyched that I did it.

You’ve got your own colorway now. How much influence did you have on the process of designing the colorway?

It’s a full black eagle shoe, the David Gonzales pro model. It’s Charles [Collet] and me who have one. Charles chose the color claret and I chose black, because I really like the color black. We could also design something that would go onto the insoles of the shoe. My shoe has a little “Noir” thing on it, which is actually a tattoo on my upper left arm. It means black in French and I think it’s a nice translation. I just like the word Noir. And on the back of the shoe you have a little triangle thing with the letters “FT”, which are my initials.

Although you’re living in Amsterdam at the moment, you grew up skating in Belgium. How comes that Belgium has so many internationally successful skaters such as Youness Amrani, Axel Cruysbergh, and Phil Zwijsen?

I don’t know. We’ve got a couple of really good skateparks. Not so many, though. I think it’s in the genes of the kids or something. Belgians are more like working people. Everybody knows that he has to work for whatever he wants to achieve. That’s also something a lot of children get from their parents. They are motivated to try and just do in order to reach their goals, you know?

Sounds like the perfect mentality for skating. What else is going on besides your colorway right now?

The thing is that after this Globe part I’m just gonna rest for like three months, because I didn’t really have a lot of time to film the part and when I was filming for it I had so many injuries that I was basically skating with pain all the time. So, I just need to recover and heal. I don’t think there are gonna be any other developments except some videos that are coming from Afends and maybe some more stuff from the tour with Globe. But after the tour I’m just gonna try to get my body fixed so I can go out and film in summer again. In the beginning of next year, I’m gonna try to put out a Thrasher part for Afends, which will probably take a lot of time since I haven’t started yet. But I’m psyched about what next year is gonna bring. 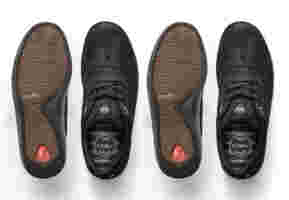 It’s a rare thing that you get surprised by a new face and are instantly fascinated by his skating and the vibe that he brings along with him.

At the Big Brother X DC exhibition in Paris we talked with Dave Carnie and Sean Cliver about the crying Bones Brigade and buttfucking pirates.