Perfectly timed for the international women’s day Jana Malzkorn releases a video with which she wants to document and push the female scene in the Ruhr area. For those who don’t know Jana, she’s been active in the scene for years, has mixed concrete at Utopia and helped set upthe Art of Skate exhibition, among others, and is now the driving force behind "geil und gefährlich". We talked to her about what drives her and what is still to come in the future.

Hello, I’m Jana, 30 years, I’m originally from the beautiful city of Aachen and came over the last few years to Dortmund and the Ruhrpott. Here I also work for the local skateboard club (Skateboardinitiative Dortmund) and have been organizing the girls* skate sessions in the park for some time. In general I do a lot of things in Dortmund and the surrounding area when it comes to organize stuff around skating. Always with a view to the women’s scene, but also the appropriation of places to skate or build a D.I.Y skatepark, like Utopia. (You have a D.I.Y. project somewhere and need help? I'm always up for building).

"Over the years, the scene here has literally exploded, so that I have partially lost track of how many women and girls actually skate here now."

And then please introduce “geil und gefährlich”. How big is your crew and what is going on in the Pott?

So geil und gefährlich is not a fixed crew in the sense, but simply a form of presentation of all the different cool women* in the skateboard scene in the Ruhrpott. That’s the idea behind it. In total, 25 girls and women were filmed for two videos last year. But there are clearly more skateboarding here, I’m sure. Of course, what happened here the last few years was a lot of Utopia, which is unfortunately no longer there. And just Utopia has helped, among other things, that the skate scene here has grown together more and more and also the girls scene has found its place there, which makes me personally super happy. In addition, there are more and more women and girls on the board, who have the desire to start things and roll together. So there was the Girls Skate Week in Essen last year, which was very well received and has helped again, that all have met across cities and now, as far as that just also goes, connect with each other stronger.

Are there connections to other crews?

Because the goal is only a presentation of the scene, there are of course several connections to other crews. All women* who have the will to be filmed should be shown, in order to be able to show what's going on in the scene here in the Ruhrpott.

What do you have to say about the video? How did it come about?

When I moved to Dortmund in 2015, I was one of the few women here in the skateboard scene. Over the years, however, it has literally exploded, so that I have partially lost track of how many women and girls actually skate here now. Then there’s a special vibe for me, from having fun skating, regardless of one’s own ability, and the cohesion at joint sessions, which I really wanted to capture.

Is there actually a replacement for Utopia now?

There will be a replacement. It won't be a second Utopia, the location and the project were simply unique. What’s to come will be just as cool and exciting, just different.

Will we hear more about “geil und gefährlich” in the near future? What do you have planned?

There will be another “geil und gefährlich” Utopia part soon. What will happen this year depends on how much the women* around here are motivated to be filmed while skating, which is also a huge effort. Therefore, thanks to all who have participated and dared! I have motivation to continue and would be incredibly happy to bring back old and new faces in front of the camera. So, if you read this and feel like skating, just get in touch!

The clip is called “On the road”. Where were you on the road everywhere?

Well, unfortunately we couldn’t go far away last year due to corona. But the situation here with all the cities in the area enabled us to be somehow on the road. We filmed in Dortmund, Essen, Bottrop, Bochum, Hattingen, but also in Cologne and Münster. 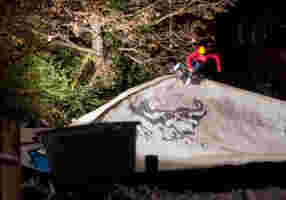 A visit at the White House, be present at the moon landing or flying as a bird through life – Daniel Lutheran would do it all.

Vladik Scholz doesn’t only do kickflips on piers, in this video he also shows you how to tailor your own pants.

Destroy what destroys you! Robin Wulf swings the battleaxe in his Volcom part.

A trip for the books