Checking in with Karsten Kleppan

Karsten currently resides in Copenhagen, dividing his time between domestic life with his girlfriend and filming clips during the last sunny days of danish fall. We met the WKND Pro on a session for a brief chat about upcoming projects, current events and life these days.

Hi Karsten! How has your year been so far?

The year's been pretty shit for everyone, but I've been spending some time back home in Oslo. Just been filming there, trying to be productive. I've also been travelling around Norway a bit, I've got a filmer homie, Pekka, and he's super down to go on trips and missions. Definitely been occupied. My Girlfriend lives in Copenhagen, so I've been coming here a lot as well.

What's the current situation in Oslo?

It's similar to Copenhagen, heavy in the beginning and then around June, July it was pretty mellow. You could go hit the bars, people were outside, pretty much back to normal. Then the second wave hit and then now it's similar to the beginning, starting to shut things down again, wear the masks and all that stuff. Hopefully, it'll fade away soon. Kinda over it, it's boring.

I saw you were at Cold Hawaii Games the other day?

That was super fun! I've been to Jylland once as a kid, so I didn't really know what it's like, but it was super cool to get invited to the contest. Right on the beach with a scenic quarterpipe with the ocean in the background. Super good vibes!

It's crazy how the whole waterfront is basically a skatepark.

Yea, the way to the beach is semi-skatepark-ish. I think it was designed for people to be able to skate it, but it's in between a street spot and a skatepark. It's super fun to skate. It was so good with the weather as well. It can easily get windy and super cold, even in summertime, but it was perfect conditions. I even got to surf a little bit, it was an action-packed weekend! 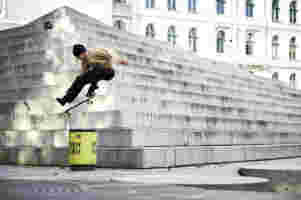 Crowd Pleaser - One foot in the midst of a line

Are you working on anything right now?

We're actually doing a Nike clip in Oslo, there's a couple of Nike guys living there. Jan Henrik Kongsten, Deedz, myself, and also some up-and-coming dudes. I think it'll go up on their Youtube in November, December. I'm working on a clip for Weekend as well. I don't really know what it's going to be, just trying to stack footy. Always, that's the job. 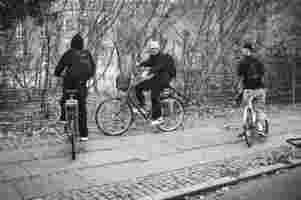 How's your day to day in Copenhagen?

Get up semi-early, meet up with Hjalte [Halberg], Tao [Tor Ström], Julius [Rohrberg] and whoever is down to go skate and we just hit the streets. Cruise around. We've been trying to go out of Copenhagen a little more because there are so many hidden gems just in the outskirts, so we've just tried to pick a zone to go out to and hit some new spots. Then I'll spend time with my girlfriend in the evenings. She goes to school and is occupied all day while I'm out skating, so it's perfect.

How do you prepare yourself for winter, what will you be skating?

I'm honestly a little worried about winter. Obviously we have indoor skateparks, but if it keeps going on like this you can only be maximum 20 to 50 people inside. It's going to be hectic to be able to skate. I hope for the best and I hope we can travel. I really want to go somewhere warm and see some new spots, would be great to go to Portugal or Spain.

An Indoorpark in Norway just burned down the other day?

Yes, that was crazy. It was two hours from Oslo. I don't know if they know what happened yet, but I think it was an old Gym they built into a skatepark. It just completely burned to the ground. They're probably going to get some insurance money and find somewhere new, that sucks.

There's a fundraiser, too.

Hopefully they'll be able to raise some money. I'm sure the city will figure something out ... hopefully.

How do you approach the rails you skate?

Skate rails a lot, it's all about confidence! Today we skated that rail and I hadn't skated a normal rail down stairs in a while. You just gotta get in there, try to get some easy tricks down and build some confidence. I skate a lot of flat bars when I skate in Skateparks. I love skating little rails, I try to do it every day. It's all about precision and being confident to get into the right lock-in. My advice is just to skate them a lot, you'll feel better on them if that makes sense.

We couldn't be more excited about the teasered upcoming projects. In the meantime Karstens "Just Karsten's" Part is ripe for a re-watch!

The Berlin Open started yesterday with a session at the Dog Shit Spot.

Getting paid to play with your friends

Once a year, the small Swiss alpine village of Laax becomes the hotspot for transition skateboarding – check it out live!

We dont know if its because of Max Palmer and the boys, but Washington D.C. and Baltimore looks really fun to skate in this Clip. Check it out.

Moin, here is a new videoof Moritz Ueberall and his friends in Hamburg. Better dont miss.

Is this a VHS tape from the 90s? No, its a new clip from Pangea Jeans.