Empowering Through Skateboarding - A Red Wheel That Matters

The world of social skateboarding has grown over the last decade, and we’re hearing more and more about it! Skateboarding’s potential to empower and teach is at the forefront of these non-profits’ work. To celebrate the amazing, yet hard work these NGOs are doing, we will talk about a few of these organizations. Let’s kick it off and go to Bangladesh where about 1.5 million kids live and work on the streets. We talked with Susie Halsell, the founder of Bangladesh Street Kids Aid (BSKA) to hear more about how she uses skateboarding to support these children. Sophia, who is spearheading BSKA’s new campaign, Red Wheel Society, also joined the conversation! 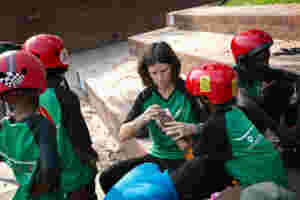 Hi, let’s jump right into it! What led you Susie to create BSKA?

Susie: I was with a humanitarian organization that surfs and takes surfers abroad. We brought 20 skateboards in our luggage and did a little competition at the end of our month there, for the kids. As I saw a lot of kids roaming around the streets, collecting recyclables from the early morning to late at night, it just left me like ‘whoa’ you know, I had a really nice childhood growing up in California and stuff. Then I just decided that I wanted to do something more impactful on the long term for the kids. It’s just been a long process of figuring out the culture, learning the language, and a lot of time and energy. But it’s all been worth it!

What kind of activities do you do with the kids?

Susie: Our staff there will go in the early morning to our transitional home that we have for the kids, where they can eat, shower, and get medical care for example. When the staff comes in the morning they’ll do meditations and yoga, then they’ll do one lesson in Bangla and English. The afternoon is more like art and that kind of stuff, and either a social or environmental issue. We also go skating in different spots in Dhaka. Our kids would go there and then other kids would join and skate. It’s a pretty cool system how skateboarding draws people together, it just happens organically! 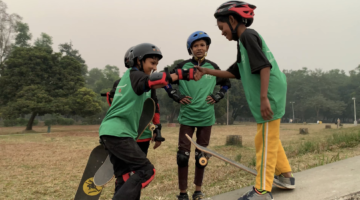 How’s the skate scene in Bangladesh? Is skateboarding popular?

Susie: Yeah it’s growing! There’s a huge community and everybody knows that I’ve been in the country for so long. They all call me ‘Susie Apu’ which means sister Susie ahaha. This guy's skate-shop in Bangladesh sells boards and ships them to anywhere in Bangladesh. So people are getting their boards and forming their little groups, it’s growing really fast. You can look it up, they have a Bangladesh skateboarding community page!

How do you think skateboarding can help the kids?

Susie: It’s definitely empowering them as far as where they were, and what they are doing now. When they’re skateboarding, they feel like they belong. Especially for the girls, exercising outside is not a big thing, and the girls get that chance to be free. It’s just super empowering!

Do you have a lot of girls coming in?

Susie: Yeah, that’s kinda a priority – at least 50% girls to boys ratio. Plus the girls are more at risk on the streets, they’re more vulnerable to a lot of different things. So we give them priority over the boys. 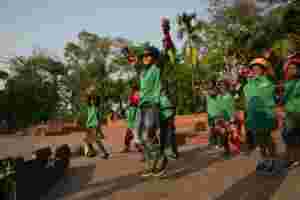 "Showing the situation, and creating awareness is super important. Skateboarding can give you so much."

It all sounds amazing, I’ll check it out! BSKA now has this new campaign called Red Wheel Society. What is it about?

Sophia: In an ideal world, we want to have all the skaters skating with one red wheel, to dress awareness about the NGO. I created the ambassador set with a shirt, a red wheel, a sticker. Then I found skaters who were willing to support us and skate with a red wheel. That way when you go to the skatepark, friends ask you ‘what’s the red wheel about’ and then start talking about it. Susie also mentioned the other day that the kids in Bangladesh feel the support they have all over the world, that people are hearing and seeing them. Which I think in the end is maybe even more powerful than just raising money!

It’s amazing how it brings the community together.

Sophia: Yeah it’s great! I went to a skate contest in Berlin a few weeks ago, and some of the ambassadors were participating with that red wheel. It was so amazing seeing them skating and getting questions about it.

Why a red wheel?

Sophia: The flag of Bangladesh is green with one red dot in the middle. So a red wheel was the easiest way of transforming that image into the world of skateboarding. And it can also be seen as a rising sun and a symbol of hope. Hope for the kids.

The money you get from this campaign will be used to directly develop the shelter and getting boards and everything?

Susie: Yeah the money is sent to the staff there and it goes to the rent, food, medical care,… We wanna develop the shelter and have an area only for girls. We also want to open a clinic where they can get HIV testing, and other kinds of medical services. It would just be easier instead of going to these hospitals where it all quickly get complicated. Some of them get into drugs at 5 years old, so at 12 they’re already super addicted. That’s why we wanna develop our shelter.

Wow! How can we support the work you do there?

Susie: You can donate to the campaign, and we also have a volunteer form on the website. It’s always really cool to have volunteers as it makes people know about us real quick too. And people bring in their talents and the kids love that!

Sophia: Also how you reacted about the kids taking drugs since they’re 5 years-old, and that’s just one example. Showing the situation, and creating awareness is super important. Skateboarding can give you so much.

It’s interesting to see how skateboarding can be associated with drugs and drug abuse here, but can also get people out of drugs. It’s amazing!

Susie: Yeah somebody told me the same thing about a month ago, and I didn’t think about that, that skateboarding is more often associated with drug abuse in the developed world. But there in Bangladesh it's definitely a positive thing. For me skateboarding is totally of a positive charge in people’s lives, and in my life for sure!