When you have a club, that’s empty during the week and wooden walls, glued with skatemags – what do you do? Sure thing: a skate session! If that’s not the first logical connection that pops up in your head, I’ll give you some context. In Laax in Switzerland they don’t only snowboard, they also have built a skatepark on a mountain. Probably the highest skatepark in Europe. And during last summer they hosted a skatesession on old snowboard obstacles. During our stay there, the idea popped up to expand working together to the upcoming Team Trouble and create a zine for it. Doing the zine was great fun but shit happened at the print shop – so in the end we had to print it again. Since we didn’t want to throw away all the mags already delivered to Laax, photographer Alan Maag and his Team Trouble crew came up with the idea to glue the pages on the walls of the event for decoration. And now they recycled them even another time for a session in the club of the Riders hotel, where normally the Team Trouble afterparties happen and where some of the photos in the zine got shot. That’s how it looks when skateboarding goes on a full circle of recycling. 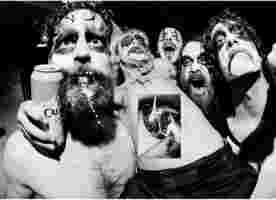 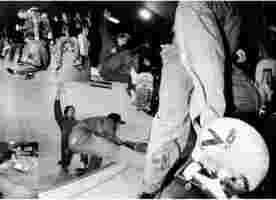 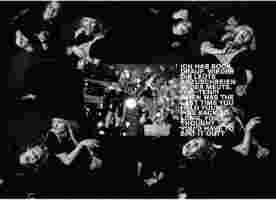 Between ice baths and beer, there was also some skateboarding in Laax.