Miles Silvas is one of the most talented skaters out there. For the release of the new adidas Skateboarding City Cup he comes around with “One Stop” – a five-minute, single shot sequence of him putting down one of the most extensive lines that skateboarding has ever seen. The edit was filmed at night in the heart of the Koreatown neighborhood of Los Angeles in real time over a seven-block stretch. We talked with him about this unique project.

Who had the idea to film "One Stop"?

Miles: Colin Kennedy came up with the plan.

Did you ever watch the old parts of Kien "Donger“ Lieu? He did some endless lines too…

Nah man, I haven’t. But I’m definitely gonna check them out now!

When you heard about this plan – did you like it from the beginning?

Yeah, I was hyped. It sounded a little crazy at first but I was down for the challenge.

Why did you choose this "spot" to do this?

Colin came up with the plan and location. He said it worked for his idea with all the spots lining up on the same block.

How long did it take you guys to film this incredible line?

A couple of nights of trying. It was a mission! We spent one night just mapping out the route and then started trying the next night.

"I had three guys following me the whole time. It was pretty crazy!"

And there was only one filmer?

Yes and no. Colin was filming me, another guy was focusing the camera, and a third guy was making sure no one messed up and was feeding the skateboard to whichever filmer needed it. I had three guys following me the whole time. It was pretty crazy!

Whose legs suffered the most? Yours or the filmers’?

Probably the filmers’ because they were carrying the heavy equipment. I was getting dusted, too. But it was more mental trying not to lose it or get over it.

This Gap to Switch Backtail at the end was so sick. Which is your favorite part of the line?

Thank you! I was super hyped on that. That was definitely my favorite part just because I have never skated that spot before and it was on the bigger side. The whole line was natural light so it was lowkey dark. I wanted to just wait until I got there in the line to try it so the pressure was on and if I got broke at least it was when it mattered. I made it to the gap to ledge and did the switch back tail on the second try and tried hard to not get too hyped and fuck up the pushing after that (laughs). 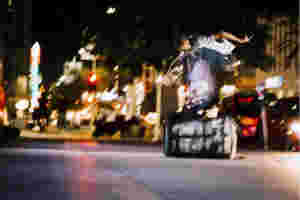 Which trick killed the line most often?

Probably the over the rail or the flat ground or the blunt fakie. All kinds of shit. I started out switch flipping over the rail but once it started to become a mission, I realized how little I was going to be able to try it with security at that spot and cars creeping on the corner. I switched it up so I could keep it pushing.

So the line wasn't completely planned?

Nah, I improvised, for sure. Like I said with the switch flip, I changed it to switch back 180 and then just kick flip. The majority of the line was relatively simple tricks but knowing that I had seven blocks and 10-15 tricks ahead made it easy for me to start over thinking the simple tricks and messing up.

Did you have problems with some passers or the police?

Yeah, man. Bums and security! Security was more annoying on the over rail. The bums only popped up a few times.

Did you have some guards to keep the line skateable? E.g. somebody who was looking over the trash can where you switch heelflipped?

Yeah, exactly. My homie, Alan, was watching the trashcan and was running over to Jkwon to make sure everything was good. We had walkie-talkies and all that.

Did you have to adjust your desired line to account for the filmer keeping up or making sure each trick was filmed properly?

Yeah because it was dark and there were cracks. There's a quick scene where I step over a chain and walk over so the filmer could make it and keep going with me.