There are guys, that skate on pro level. And then there are guys, that are even ahead of that. Brandon Westgate is one of those and it even gets more obvious, when you see him skate in person. We met him, when he came to Cologne on his first New Balance trip and talked with him about his new sponsor and his cranberry farm back home.

I guess you are lucky that most of the tours are in the summer time, because you’re back home for the cranberrie harvest then.

Yeah but that’s only like a couple of weeks. It would take me realistically like ten days – if the weather is good – but it always rains for a bit. The way that I pick it you can’t harvest in the rain.

Do you do it all by yourself or do you have people who work for you?

No it’s just me, and then my dad helps out. And for harvest I hire a couple of friends. Because you gotta pick it all and that’s like the only time where you really gotta do something every day. But other than that, it’s just a small farm so I kind of chip away when I’m home. It’s a lot of mowing in the summertime and irrigation, keeping the sprinklers all working.

Is it more like a hobby or are you really making profit out of it?

I’d say it’s more like a hobby. It does make a little bit of money and pays for itself and a little bit extra.

Are you planning to live off of it after your skateboarding career?

Yeah, possibly. If it had to be something other than skating, I’d like to do that.

I read that you also have a lumber mill at your house?

I got a little saw mill, it’s like a band saw on a track. You just put a tree on there and you can cut anything from like maybe 2 foot round by like 16 foot long. 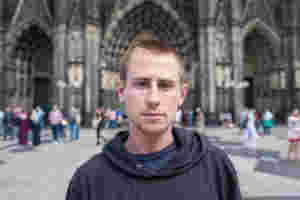 And you build a lot out there?

Yeah, I like to build shit. I got a lot of hobbies. Recently I built a garden shed, but it’s just like a post and beam shed with five by five beams, because I just like to cut lumber to actual dimensions. You know, if you’re at the hardware store it says that it’s a two by four but it’s really not. I like to cut everything myself. The whole structure is like a five by five and then the roof rafters are like three by five. It’s just a little beefier and has a cooler look I think.

I saw you looking at the lawn mower when we went to the hubba yesterday. What’s your favorite machine that you have yourself or that you have repaired?

I got a tractor. That’s like the best piece of equipment that I have. But I like everything… Like a 16 foot flatbed truck and dump trucks and a bunch of farm shit. Usually the stuff that I buy is really old. It’s just used and abused and I like fix it up to use it again I guess. I don’t have like a big enough farm to really make enough money to buy all this new shit, you know? So I try to keep everything as cheap as I can.

But isn’t that more like a hobby as well: Buying the old stuff and repairing it?

I’d like to buy the new shit but it’s just not practical. You can’t really justify the costs. And also with the cranberry equipment, it’s not like the corn industry where they make all that shit for it, a lot of it is just fabricators that have made stuff over the years. My dad works for a really big company so they have a lot of old shit laying around and I can just go in and be like: “Hey, how much for this thing?” Like the picking machines that I have are fucking old, no one really uses those anymore. They work and get the job done. It’s kind of fun though, I like restoring shit, making it work. It takes up a bunch of time but I had to mainly do that for the first year to have something to pick with.

You’re living in a little village in a nice and quite area. Would you say that you have two hearts beating in your breast: one side living a quite life in nature and the other one going on trips and travel the world.

I like to just go home and be in the peace and quite. I enjoy that. I have a wife and kid and they like it there, too. And I have always lived that way. I moved like one town over but before we had a house in a small town, too. And I like it. You don’t have to deal with traffic and shit. It’s just easier.

You’re on your first trip with New Balance. What was the reason why you left Emerica?

A while ago Jeff Anderson quit and he was the brand manager and they didn’t find any to fill that role. And also John Minor, he just quit and works for Element now. There was a lot of changes and I’ve been riding for them for like twelve years and I’ve known Levi [Brown] for a while and he and Seb [Sebastian Palmer] hit me up. They’re out of Boston and they got a cool thing going about trips and the crew seemed good. So I just felt like it was time to move on because things changed there, too. I was ready to move on. But I’ve been riding for them forever and they helped me out so much. I’m super grateful for that and I left on good terms, waited till my contract was up and let them know. They were cool with it and I didn’t have to feel guilty.

They wished you good luck on Instagram and everything…

Exactly. It’s not like they were trying to fight me or keep me or anything. Seemed like a good thing.

I guess that your move was connected to Minor quitting but why did he quit?

I think once Jeff Anderson quit he tried to step into that role and I think he just didn’t like doing that and filming. I don’t know his exact reasons though, but I guess he got stressed out about handling both. It just got tough. But honestly you’d have to ask him. I can’t speak for him but I’m pretty stoked that he went to Element since he’s gonna do the video over there and I get to film with him.

Were you talking about that before?

Yeah, I knew that he was thinking of that. But I think it was one of those things where he has been entertaining it but never really made his mind up. So I kind of knew that as well and for me it wouldn’t be the same thing without having Minor there. He was a big influence on me while I was on Emerica and I have been filming with him for years, always stayed at his house and it wouldn’t have been the same without him. I mean a lot of the Emerica guys feel like that as well. And I’m also on the East Coast so I’m kind of out of the mix a lot whereas New Balance is in Boston. It seems like it fits pretty good for me.

Would it have been harder to quit if Heath Kirchart would’ve still be the TM?

Maybe, I don’t know. I don’t know if he’d understand or not. Maybe he’d be cool about it.

So with Minor on Element – what are you working on right now?

When is it supposed to come out?

I think we are talking about spring next year. Because he just got on. They were gonna have it come out but then I think it’s a lot to organize everything and film some stuff to make it good.

Do you film on something for New Balance as well?

Yeah, I have a couple tricks in that video because I literally just got on. And they came to Boston for five days where I filmed a couple of clips.

Do you work on some other project for them now?

I’m mainly just focusing on the Element video because I’m not sure if they are gonna have a full length video or what they are doing right now. But I go on trips and we make tour edits out of it. So that’s perfect to get it going. But I haven’t heard of a part or any other project for them yet. Trying to finish up the Element part at the time…