is loading
Home Interviews Videographer The “Inside Out” video & everything you need to know about the Carhartt WIP full length
Share this:
E-Mail
EN DE

When Joseph Biais first told me about this Carhartt videoproject it already sounded intriguing. I’ve seen quite a lot of skatevideos over the last nearly 30 years and it’s always refreshing when someone comes up with a new twist, although I couldn’t really visualize what it would look like in the end. To get a bit more information about the concept before watching the video at the Berlin premiere, we talked to Joaquim Bayle, Angelo Marques, and Romain Batard who filmed “Inside Out”.

How were the premiers so far?

Romain: We couldn’t go to London due to Covid restrictions but we’ve been to Paris, Madrid, and Brussels. Actually doing premieres like this is pretty tiring. You go for some beers after and then you don’t sleep much because the next plane is super early. [laughing]

How was filming this video different from filming a “normal” skatevideo?

Romain: As a skate filmer you have to create a bond with the skater so he’s trusting that when he goes for his trick, you’re ready. It’s hard to film stuff outside of the skating cause you don’t want to break that bond by saying for example: “Wait five minutes, I’m gonna film this street dog”. The skater might get out of his mindset and not get his trick because of that.

Joaquim: The difference was on the fact that we were doing it as a team, so it meant we were able to spend time on details, being really specific on things that usually skate filmer alone on a mission with many riders doesn’t have time to do. Other than that it wasn’t that much different, we just went on this project with a really thoughtful idea on the direction we wanted. I spent some time with Joseph [Biais] from Carhartt Wip talking about the project and I also took time by myself writing about my intentions regarding the video, all of this was a few months before we actually started the project officially.

How did you organize the different cameras on set?

Romain: For me it was easy, I just asked them sometimes to go a bit further away, so they’re not in the shot. Some skaters were a bit skeptical at first. Nowadays everybody takes care of his image and they were confronted with a project they were not used to. Fortunately we made a pilot to show them, so they trusted us.

The video is called “Inside Out” and as far as I understood it, it’s about showing what it is to film a skatevideo, while you’re watching a skatevideo. Is that right?

Joaquim: Romain was focused on the action while with my DoP, Angelo, we were capturing the group as a whole. I wanted to have Romain and his camera in our shots so that in a few key moments we have the feeling that we are experiencing the session with the group. You have this meta level of what it feels to skate, without really telling it, and as well some outside aspects, how they portrait themselves or how the group evolves during filming. We didn’t want to have a documentary vibe by telling everything. You get the meta vibes by their feelings. You get the feeling of being in a session. We didn’t want to twist too much or put a narrative on it. so we had a direction but didn’t want to put too much of a stamp on it. Somehow in the end of that process and preparation we wanted to keep stuff alive in order to be surprised, to look for a certain truth within this project.

Romain: It’s still a skate video. But this video opens up a bit more because of this approach, I feel like it can speak to skaters and non-skaters.

"Skating is so full of rules when it comes to how tricks should be shot and filmed. When you just go slightly out of it, it already gets people scared."

Joaquim and Angelo, you work as filmmakers. Which projects do you film besides skateboarding? And what from your experience you put into that video?

Angelo: I’m a DoP and I do mostly music videos and commercials. This was my first time working on a skate video, but my roommates are skateboarders so I am pretty familiar with the culture.

Joaquim: I’m a director, working in the commercial industry but my background is mainly skateboarding, I have been filming skate videos for a few years since I was 19 and stopped doing it when I started to work for production companies and agencies in Paris. But thanks to Joseph who is open to try new things with me, I’m back to work in skateboarding. Feels weird but I think I brought my experience outside of skateboarding on this one.

But you had quite some skateboard output already. You also filmed the Öctagon videos.

So you always try to bring new things into skateboard videos, which have a pretty stable concept. To exaggerate a bit: A filmer with a fisheye, maybe a longlense shot, and that’s how we do it for the last decades. Do you think there could be more creativity?

Joaquim: I always had this love/hate relationship with skate videos, I’m really contradictory on this subject. There is a part of me which tells me that it’s just skateboarding and it shouldn’t be too twisted from what it is and I have this other desire to go look behind the surface and to explore the nuances of skateboarding because I still think it's a really special thing. So I always felt frustrated to see skate videos that stick to what we have seen a million times and don't dig for new feelings or new angles. But perhaps this creative limitation to stick to a “core norm” is what saves skateboarding from crappy stuff and keeps it simple which I think is a really attractive aspect. I remember a person telling me that skateboarding is like pornography in a way – at the end it’s just about showing the action. Even though we know it’s more than this, I think this comparaison still makes sense when you look at the substance of a skate video.

Romain: Skating is so full of rules when it comes to how tricks should be shot and filmed. When you just go slightly out of it, it already gets people scared. Even as a filmer you ask yourself if it will be well received or not. But I think it’s good to push ourselves out of these rules a little bit.

Lets talk about the technical side of the video? You shot 16mm, you recorded sounds, what else did you do?

Joaquim: We actually use various formats to build this video. I wanted to have two main textures to illustrate the inside of the group and the outside. However I wanted to keep these two formats not so far from each other since I knew we would jump back and forth between them in the editing. So we had a mix of P2, S16mm and stills 35mm and 120mm. I shot a lot of stills in sequences, this way of mixing the stills with the video materials allowed me to experiment with a different pacing in the film. An all of this was driven by the sounds which I was secretly recording from the skaters talking during the sessions or the off moments. 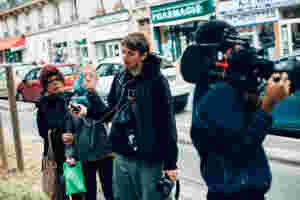 They didn’t know they get recorded?

Joaquim: I mean, they saw me with the mic but sometimes they just had a conversation and I tried to get some words that I can play with it in the editing.

Romain: Having Joaquim and Angelo with us all the time, the skaters started to get used to them. So they kind of forgot about what they were doing.

Not only that you went for a different approach on filming, you also filmed the whole video during a pandemic. How did this change things?

Joaquim: It changed the scale of the video a bit cause first we wanted to go to the US as well. It was more complicated from a production point of view with getting all the skaters together.

Romain: I was filming in Paris in times where nobody could travel, also we had to make sure that the other guys were filming in their cities with their filmers.

So it’s different filmers as well?

Romain: I was also going on trips without Joaquim and Angelo, but sometimes it was also other filmers because of the pandemic.

And then there were certain trips where you were all together.

Joaquim: The main focus was to be all together on trips but also to add some stuff from the riders local cities.

The trailer has some gnarly slams already. What were some of the craziest moments while filming this video?

Romain: Tolya’s slam from the teaser was a heavy one. Something you don’t really see is that the rail has been a double rail before. There was still a metal tip on the side and he cut himself deep with it while slamming. Fortunately he was a bit fucked up but had nothing major. It’s a bad thing for a good because the next day he met the love of his life while he was enjoying a day off in the city.

Perfect, so there’s even another layer, a lovestory in a skatevideo.

And here’s what went down at the Berlin premiere 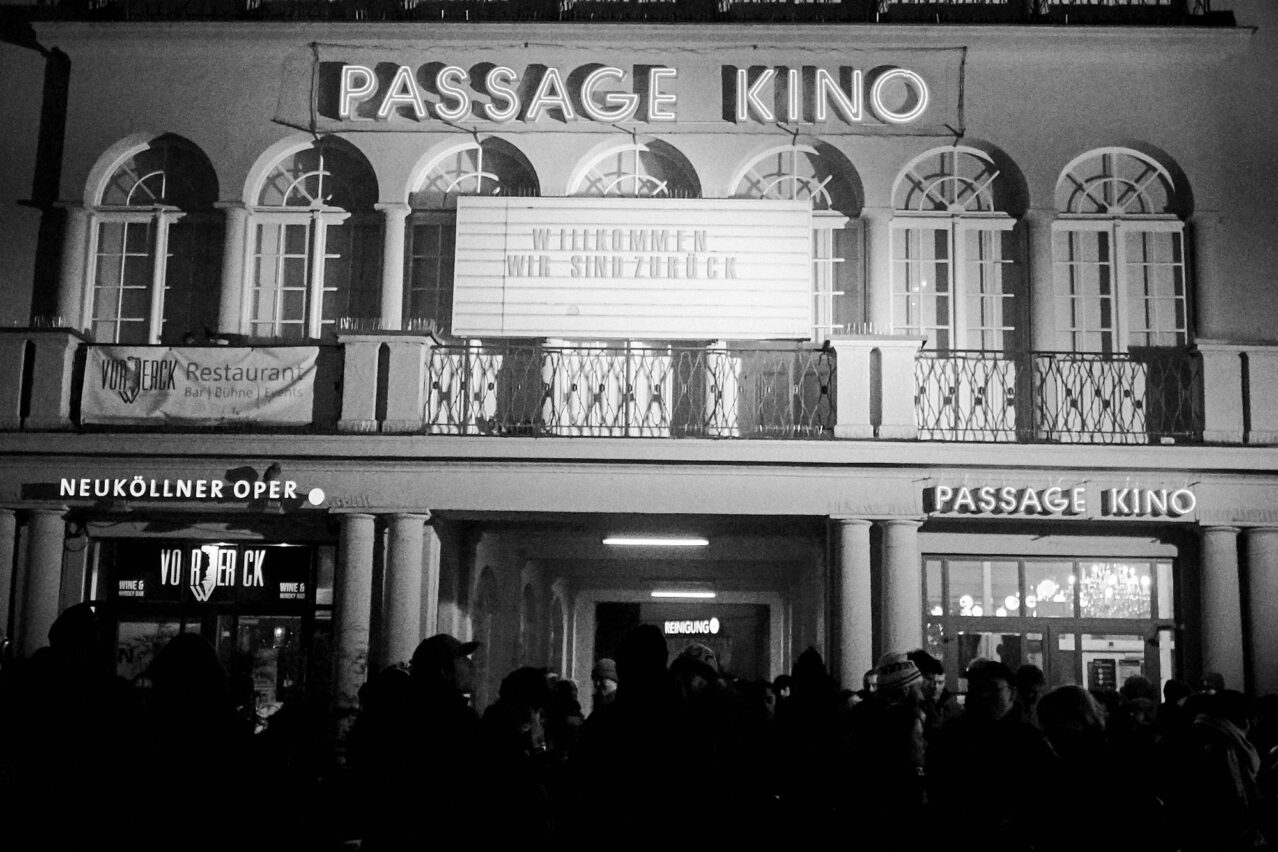 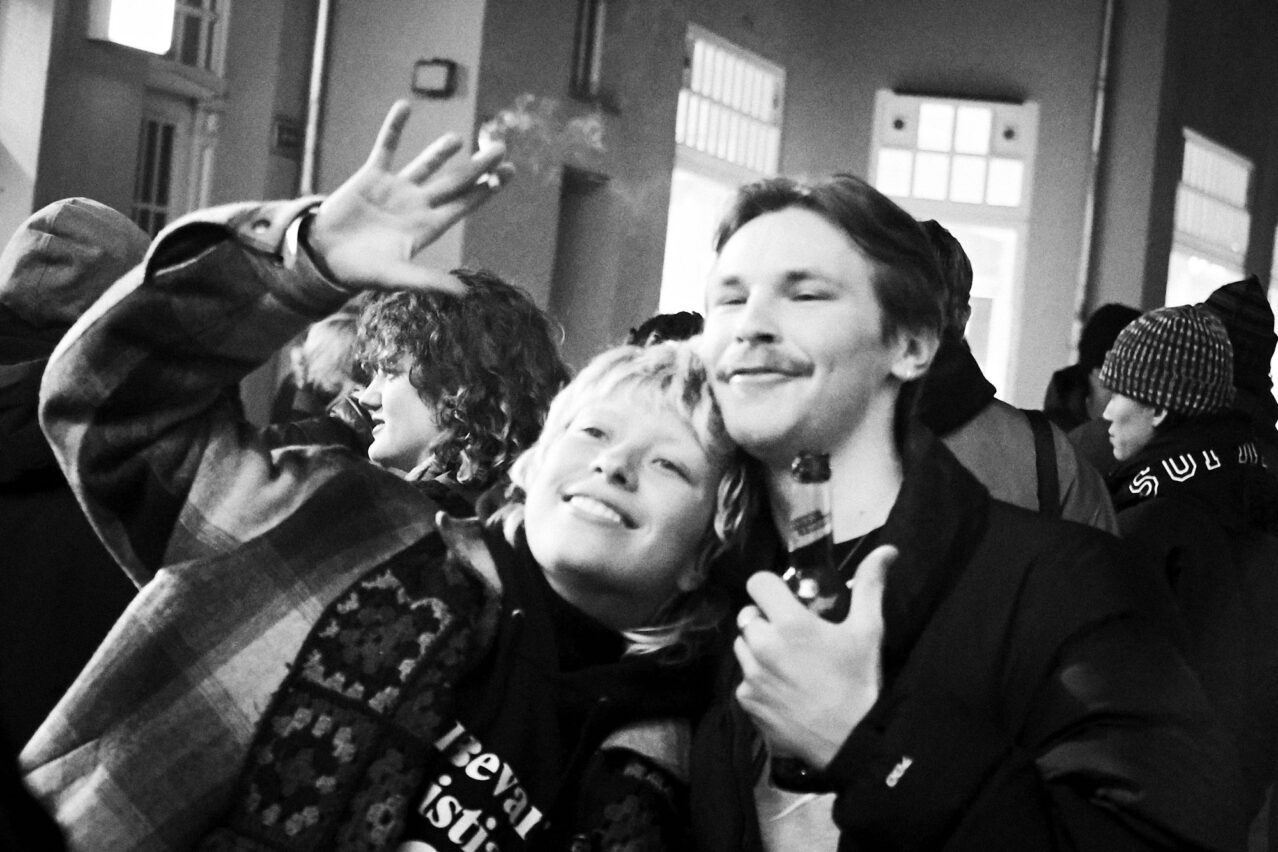 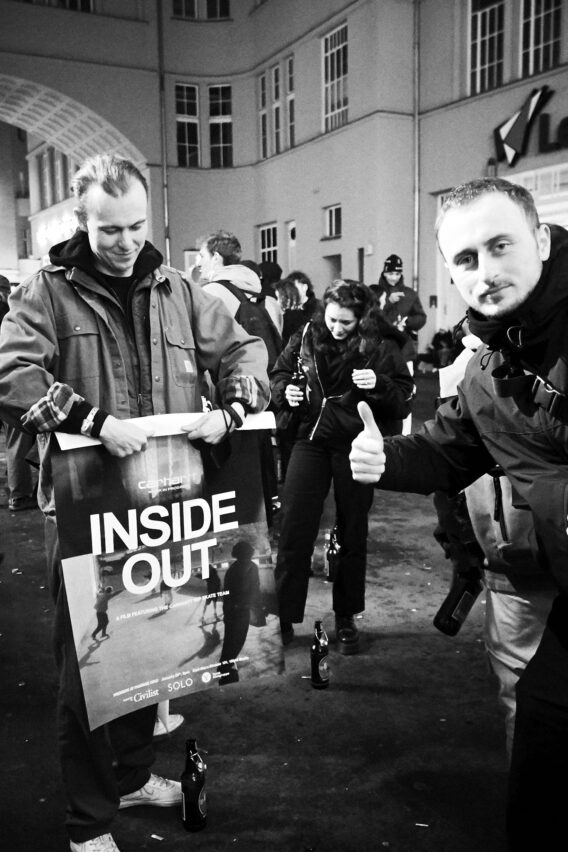 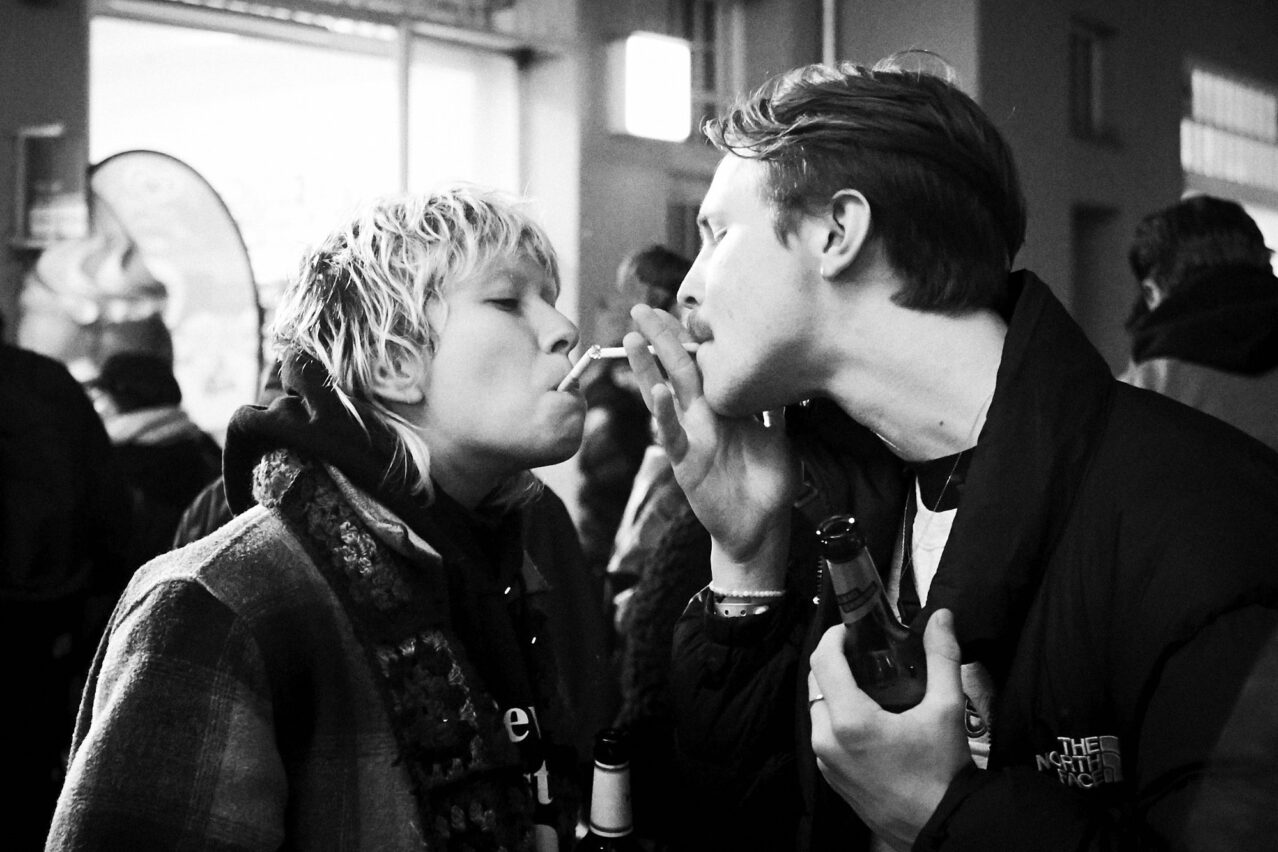 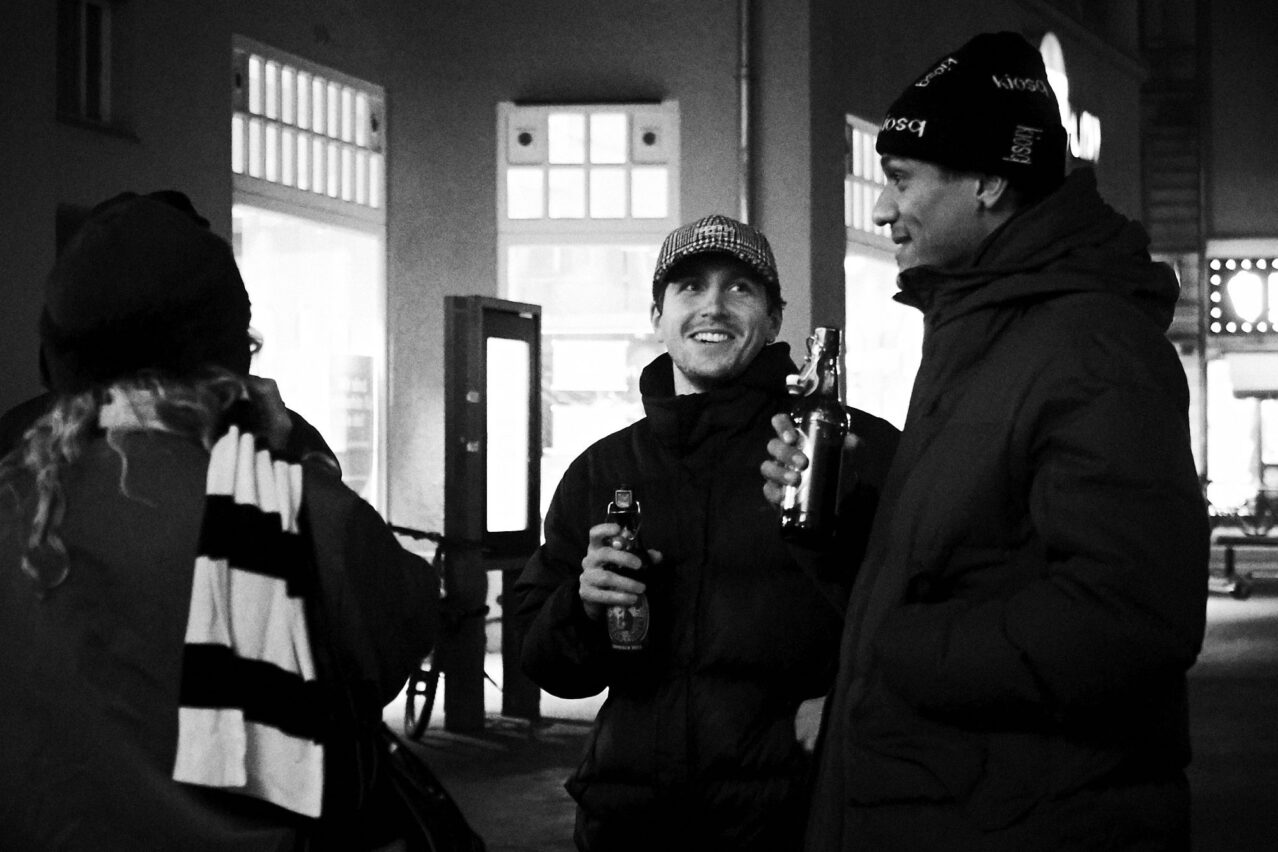 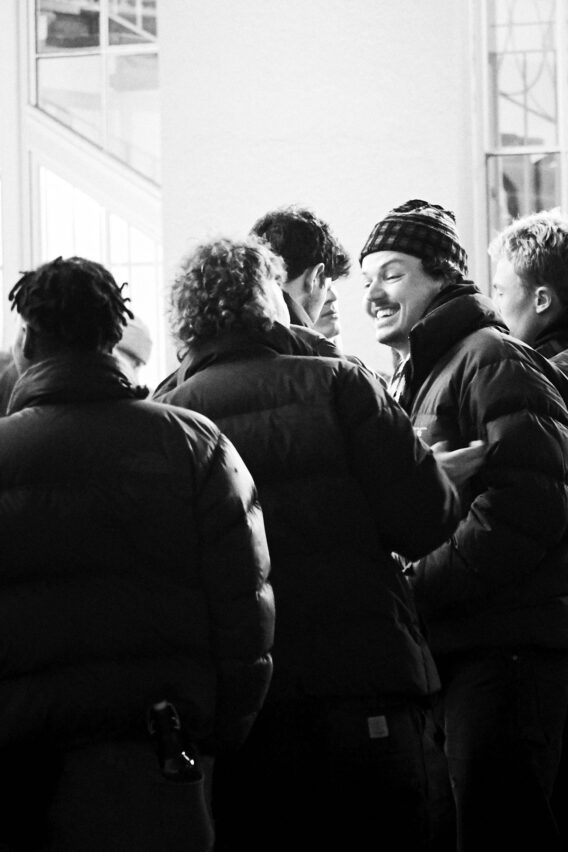 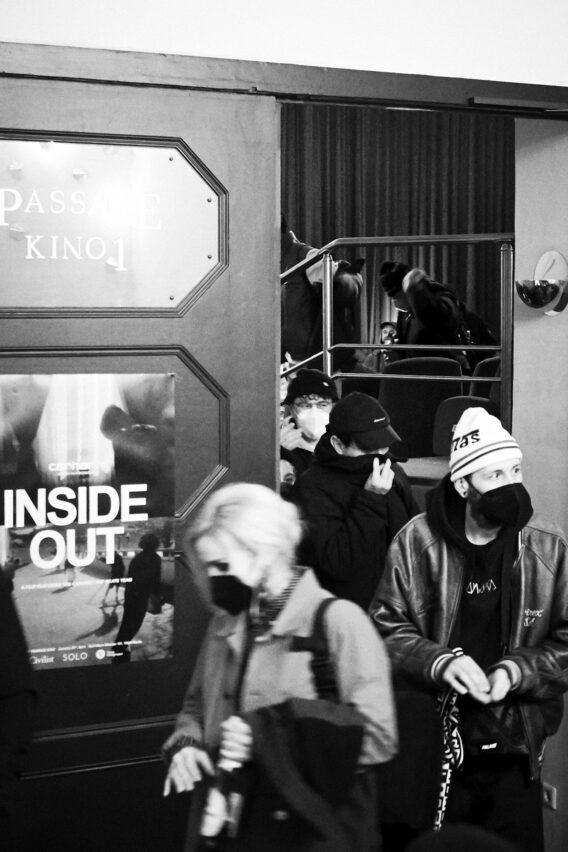 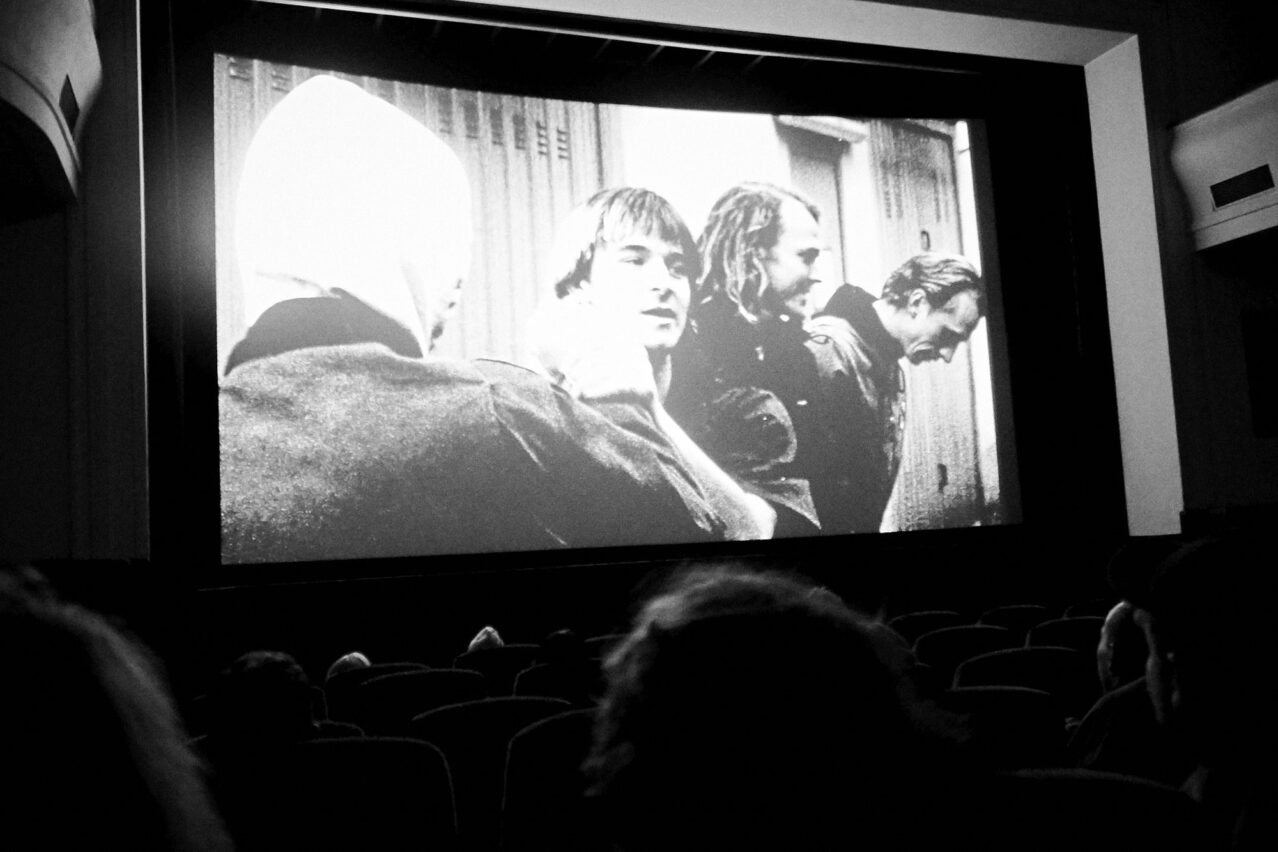 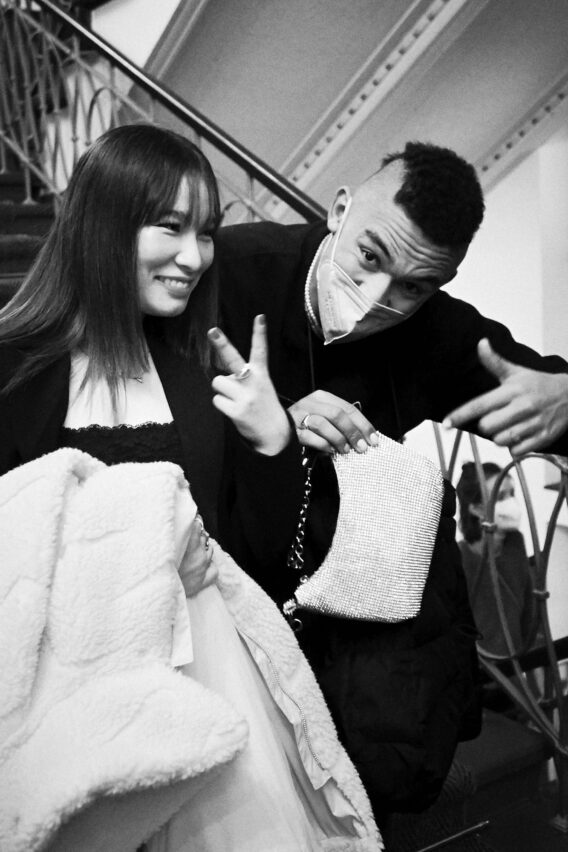 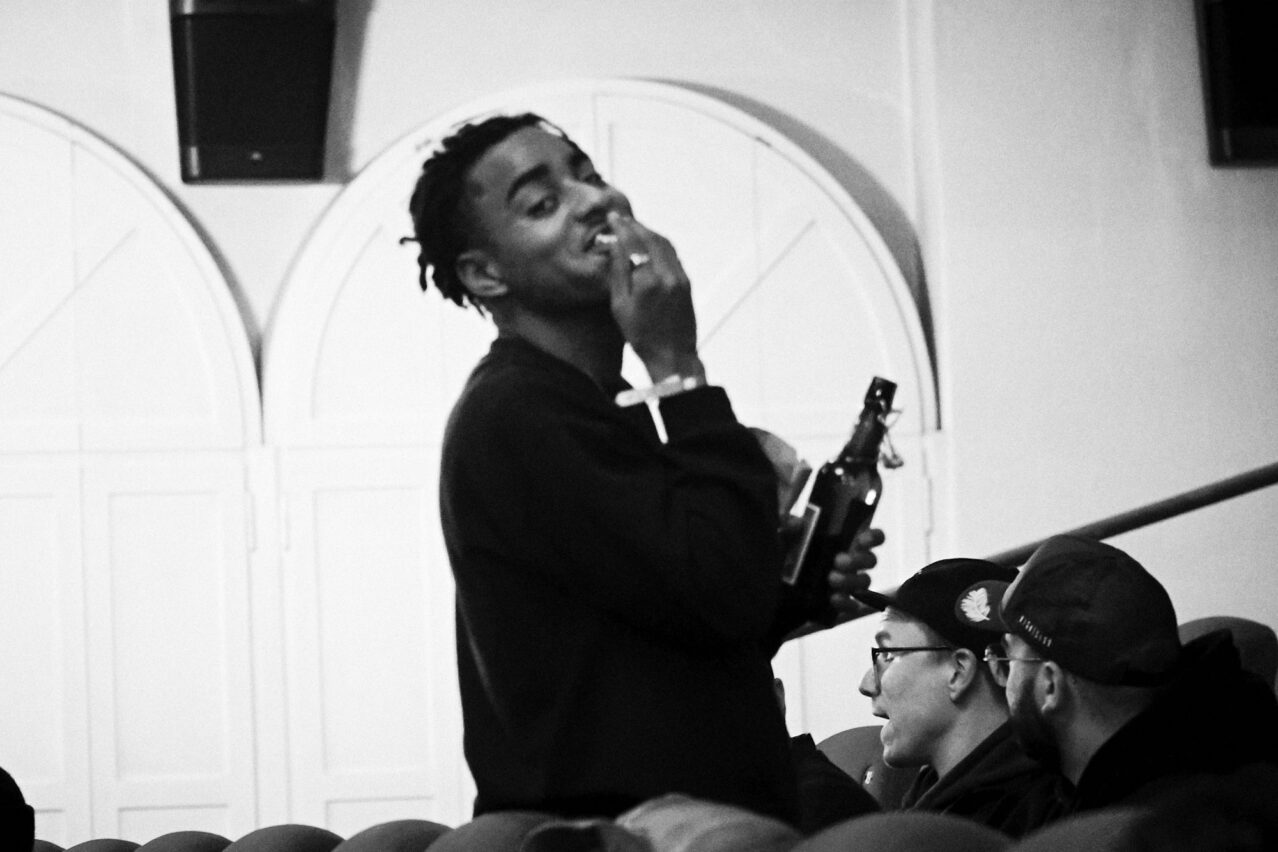 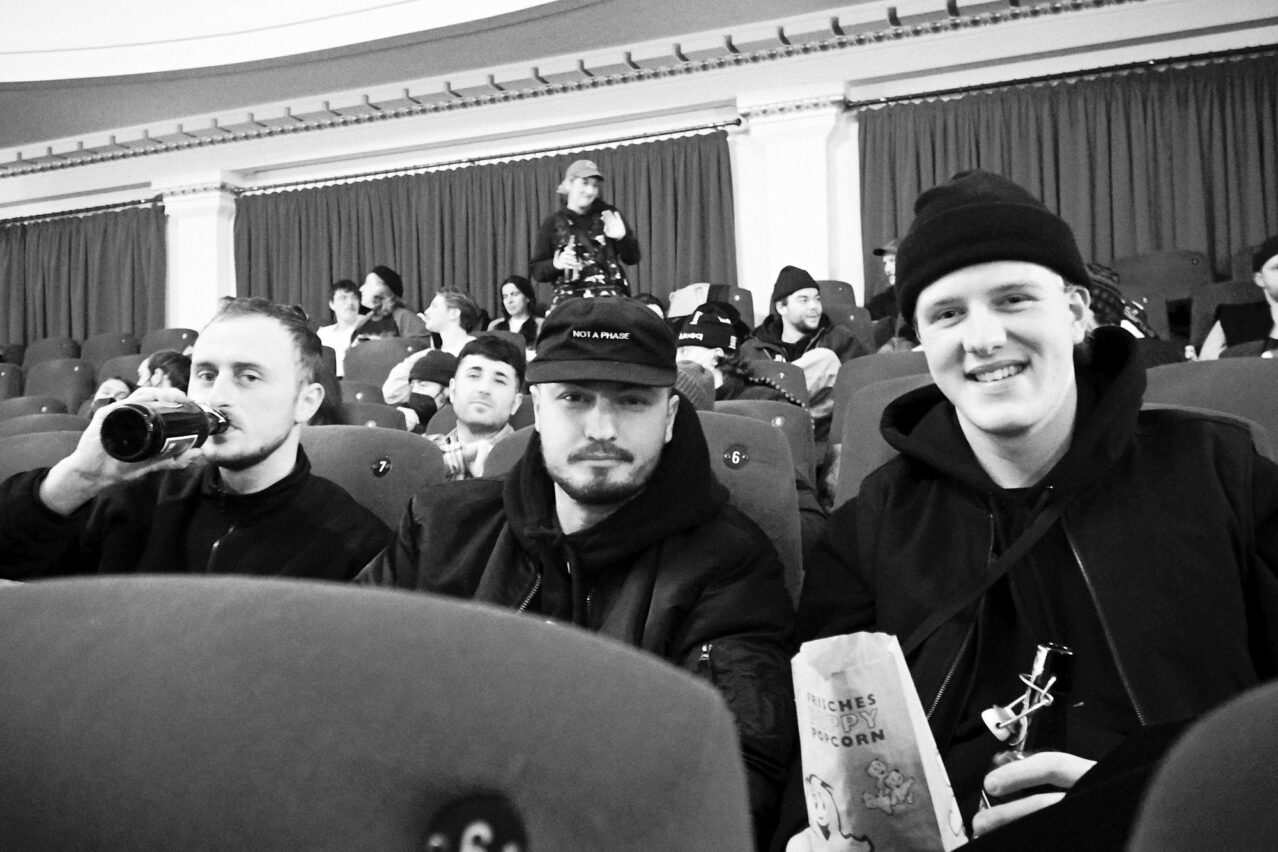 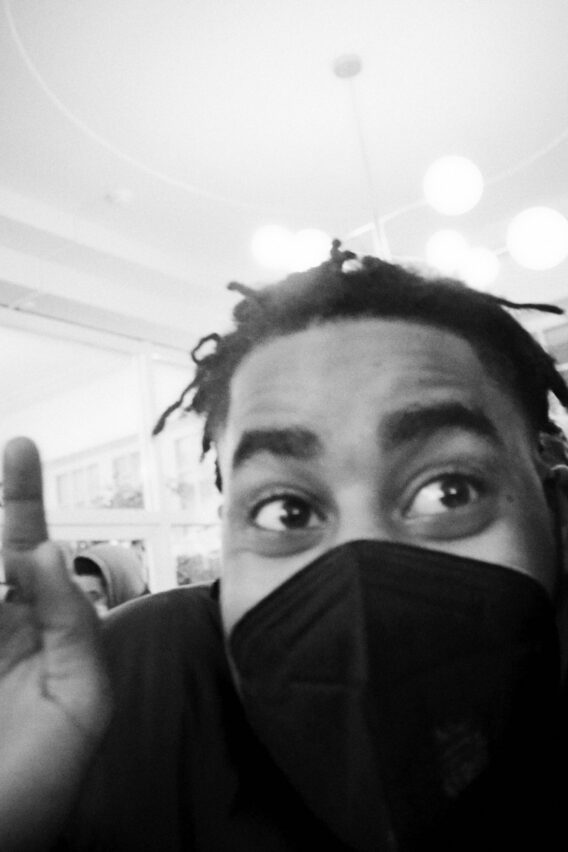 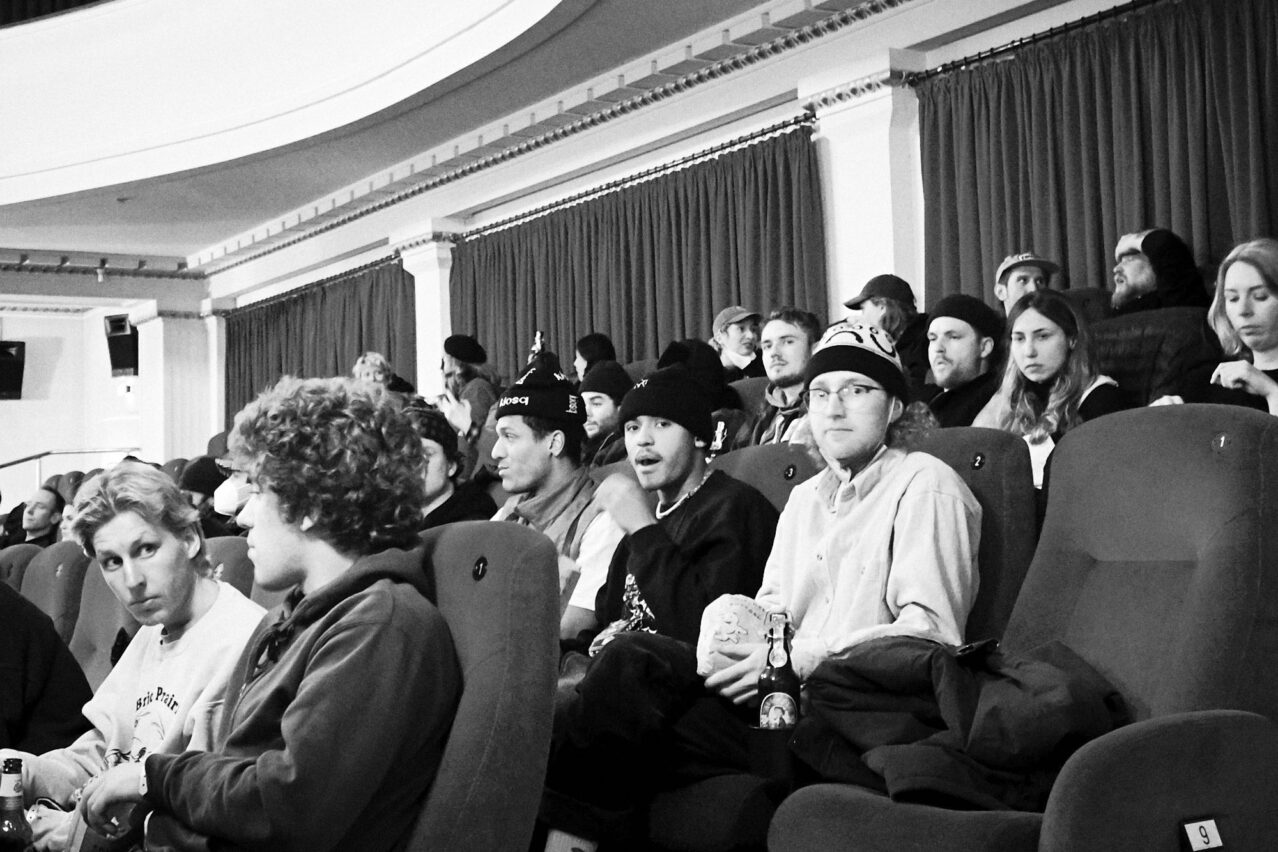 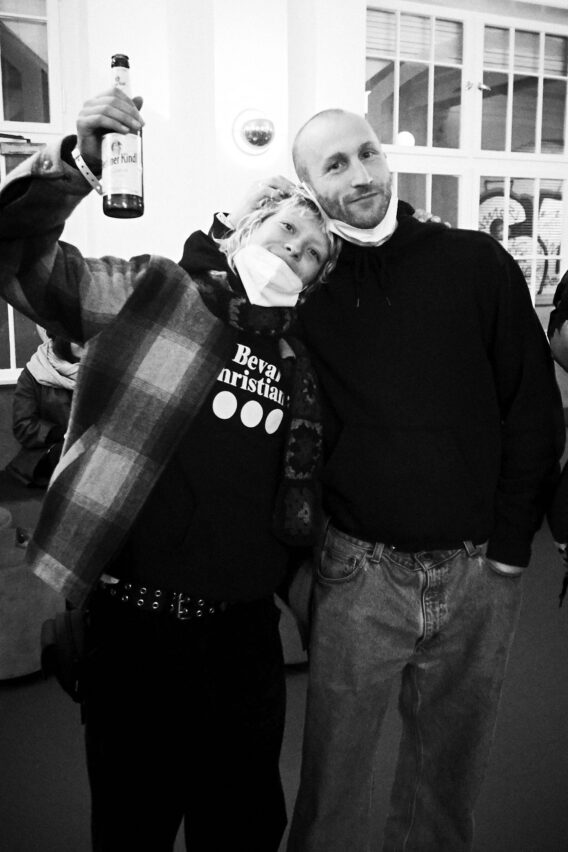 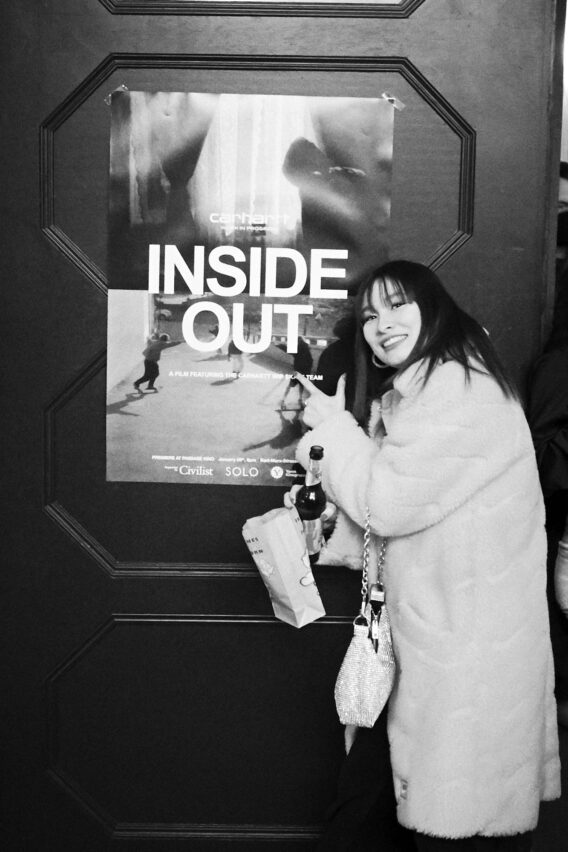 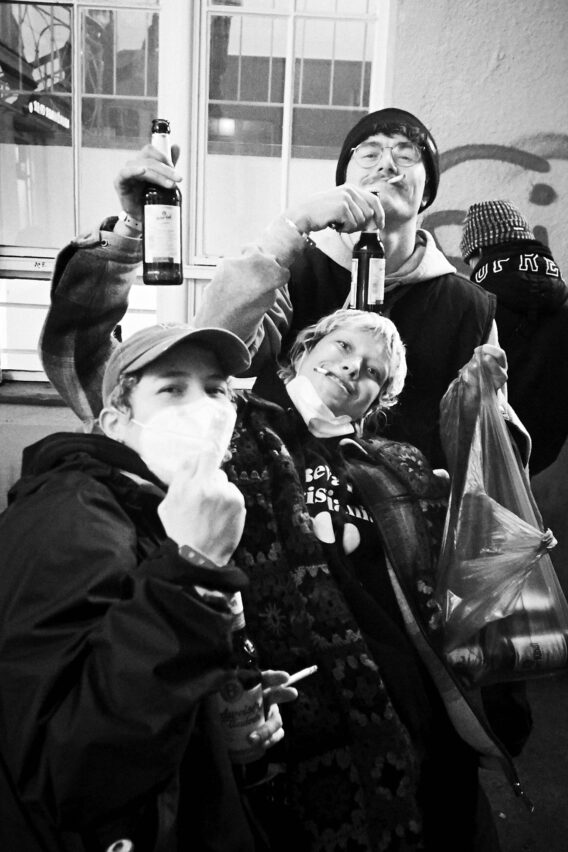 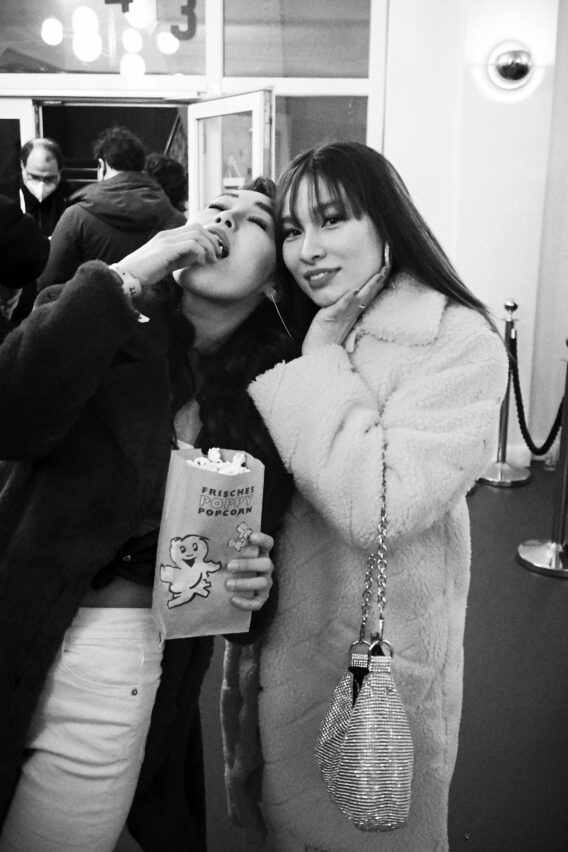 The surveillance state of the future is back. New Öctagon video with their dystopian black and white style.

Romain Batard started late as a professional filmer but brought some new ideas. Like how to film VX style with a HD camera.