Aleksandr Burchak filmed a part in Kyiv in 2022

We were a bit surprised at first when we read Aleksandr Burchak’s message in our dm’s. With all the horrible news you hear everyday about the brutal war that Russia is waging against Ukraine, you wouldn’t think that skateboarding is still happening there. But Aleksandr sent us his latest part, which he filmed in the last months. It’s a joy to see that even with all this darkness around him, his passion can’t be surpressed, plus some distraction probably also helps to stay sane, during situations like this. We wanted to know more and sent some questions to Aleksandr to understand a bit better, how it is in Ukraine right now.

I can’t really imagine how it is to live in a country that is under attack. How is life in Kyiv at the moment?

To be honest, it’s hard to describe to any person who hasn’t experienced all this horror shit on their own, but I’ll try. First thing in the morning, as soon as you open your eyes, you immediately pick up your phone and read the news. To be aware that no bomb hit your area while you were sleeping and make sure that nothing threatens your life today – then you can plan the day. But in the last couple of months, life in Kyiv has become safer and more relaxed. Although there are still occasional missile alerts, most people are used to it and no one runs into a bomb shelter. At times like these, we all test our fortune.

And how was it, when the Russian army was close to take the city?

That was such a fucking crazy and scary time! Especially for me because I was on skate tour in Europe for almost all three months of winter and arrived back on the 22nd of February, two days before the Russian invasion started. I’m still studying at the university and living in its hostel so I stayed the first ten days under the building in the bomb shelter. Then the Russian army got really close to this area and I decided to ask my board sponsor and friend Maksim Pavlenko (Papapower skateboarding) to host me on the left shore of Kyiv in his apartment where I could feel more safe at that time. It took two hours to order a taxi and it costed three times the regular price. So I got there and stayed for three months till the beginning of summer and till the time I could feel more safe at my place. Thanks a lot to Maksim, he really helped me a lot to survive life at that time!

Is it kinda like “normal” again? Are people going out for sessions, filming and everything?

For now more guys go out to skate, film and hang out, for sure. But for most people and skaters as well life changed a lot. Almost everyone has some troubles with money, with job and family. For example my hometown Energodar in the Zaporozhye region, where I was born and raised, is still occupied by the Russian army since the 3rd of March. And my Mom and Dad are still surviving over there... The Ukrainian economy goes through really tough times and all the prices became 20-30% higher. The currency exchange is crazy right now, it’s almost twice as high as before the war. So overall life became much harder for everyone.

Is there still stuff in skateshops or is there a shortage?

There are only a couple skateshops still working in Ukraine and they have some products but not much. There are some board brands that keep their stuff at storage and trying to sell boards online as well but most of them is about to become bankrupt. Because a lot of young skaters left the country with their parents or older ones just had to go work to make their living and don’t have much time to go out and skate.

"When the missile alert signal is starting, I lose my concentration but it motivates sometimes to finish a trick faster because of the thought that a bomb can hit your area and you didn’t get the trick"

How is it to film a part while war is not far away?

Summing up all above it’s really hard to film a part. At the beginning we were not sure that it is a good idea yet. During the first three months I was not sure that going out for sessions in the street is ok because I was wondering what could people around think about it. Everyone is in stress till now so you should be very polite to other people. Especially when I already began filming a trick and the missile alert signal is starting, I lose my concentration but it motivates sometimes to finish a trick faster because of the thought that a bomb can hit your area and you didn’t get the trick.

Are there a lot of skaters fighting in war? Do you have friends in the army?

Yeah, there some skaters fighting in the war for our country, but not many. Thanks a lot to them for their desire to defend our country! I have some friends besides skating who are taking part in fighting and all of these dudes became my heroes!

I guess you have some Russian skaters as friends as well. Do you talk with them about the war?

Oh this is a very tough question... Russian skaters used to come to Ukraine lots of times and we hosted them the best we could, even after 2014, when Russia started to attack the eastern part of Ukraine. And all Ukrainian skaters were still considering Russians like good homies, no matter what. But everything changed on the 24th of February. Some of them just became against us and started talking crazy shit. Some of them even think that war is good and everything will turn out fine when all of our country becomes Russia. Some others claimed that our government would throw bombs by themselves and the Russian army just came to help us, but this is total bullshit and Russian tv-news are giving such fake information to their audience every day! Other Russian skaters are just silent and still think that they are out of politics and this is very unfair to us. But there are some who understand that the current war is bad for both countries, but at the same time, according to the law in Russia, they cannot publicly express their anti-war thoughts. They can go to jail for it, so they can only silently continue skating without having their own voice. I feel sorry for them.

Besides donating, what can people do to support Ukraine?

There some other ways to support our country such as spread the information about the current situation in Ukraine. Search or ask for some true news accounts on instagram about Ukraine and do at least a couple of reposts to remind the people what’s still going on. Also you can search some information about upcoming meetings that are supporting Ukraine in you city and attend it. 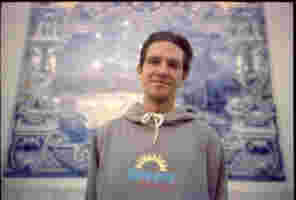